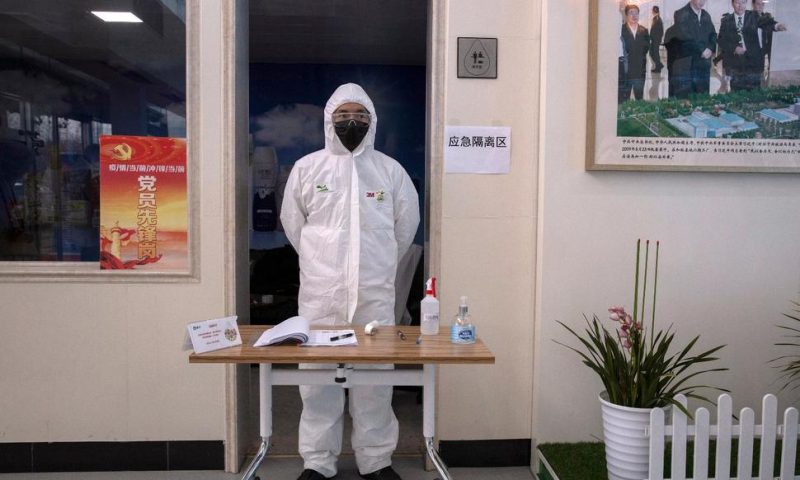 China has invited reporters to visit a dairy factory and a power plant to show how companies are getting back to business after anti-virus measures shut down most of the world’s second-biggest economy.

BEIJING — As milk bottles and yogurt six-packs zipped past on a conveyor belt at a state-owned dairy, reporters heard a sales pitch from a Communist Party official: China Inc. has reopened for business.

The government invited reporters to a Beijing factory of China Mengniu Dairy Co. Ltd. this week to see how companies are getting back to work after unprecedented anti-virus measures shut down much of the world’s second-biggest economy. It also brought them to see a power plant.

The ruling party is striving to restore public and business confidence and avert a deeper economic downturn and politically risky job losses after weeks of disruptions due to the viral outbreak that has sickened more than 82,000 people worldwide and killed more than 2,800.

Mengniu’s sales fell 20% in February due to travel and other anti-disease controls, but its sales of milk, yoghurt and other dairy products are back to 80% of normal levels and production is at 70%, said Meng Fanjie, of Mengniu’s Party Work Department.

“Also there is an opportunity brought by the virus outbreak,” he said. “People want to improve immunity by eating more dairy.”

The effort to get the economy back on track comes as anxiety is mounting that the spread of the new virus overseas might derail global trade, industry and economic growth. Forecasters expect the economy to slow in the current quarter, though though officials insist the ruling Communist Party’s annual growth targets still can be attained.

The most sweeping anti-disease controls ever imposed suspended most access to Wuhan, a major city at the center of the outbreak, and extended the Lunar New Year holiday, usually just a week or two long for most people, to keep factories and offices closed.

President Xi Jinping has put his personal authority behind getting business moving again. He has publicly ordered areas deemed to be at low risk to work on reviving their businesses while high-risk areas focus on fighting the outbreak. The government is promising tax breaks, low-interest loans and other aid.

When Mengniu’s shipments were suspended in Hubei, where Wuhan is located, factories in the neighboring provinces of Hunan and Anhui stepped up production to supply virus-stricken cities.

During the tour in Beijing, the company showed reporters workers monitoring enormous machines filling bags and bottles with yogurt and different types of milk.

Dairy employees are checked for fever before putting on white gowns, hair nets and blue plastic gloves and beginning work.

Under a photo of Xi visiting the dairy, visitors spin in place to be sprayed with disinfectant.

Delivery trucks are disinfected every four hours. GPS devices allow the dairy to keep track of where drivers go. Banners hanging from the trucks said: “The truck is disinfected. The driver’s body temperature is normal.”

That category includes most of the privately-owned restaurants, factories, stores and other companies that generate China’s new jobs and wealth. It includes thousands of small companies that supply components, from zippers to microchips to auto parts, to factories that assemble the world’s smartphones, toys and other consumer goods.

Zhang Kejian, an official of China’s main planning agency, the National Development and Reform Commission, acknowledged that activity of small and medium-size businesses was only at one-third of normal levels.

Activity is increasing gradually, he said.

“Many companies want to resume work as soon as possible,” said Zhang. “But they also worry about risks due to the spread of the epidemic. There is a dilemma.”