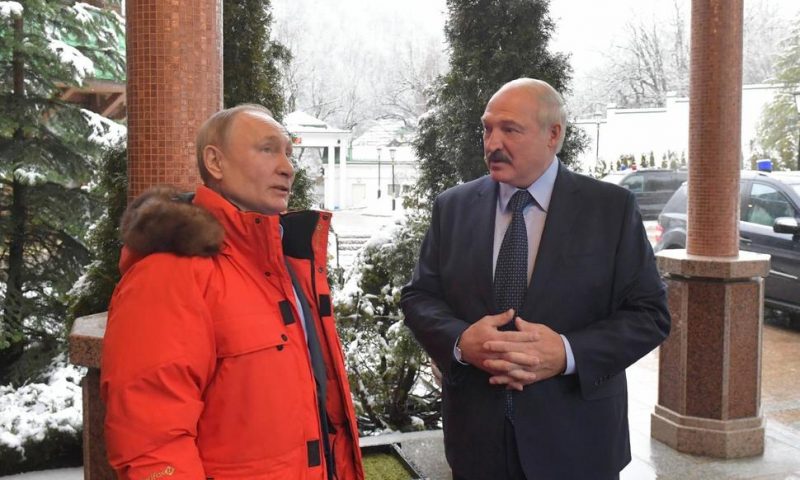 Russian President Vladimir Putin is hosting the leader of Belarus for another round of talks on closer integration amid mounting Russian economic pressure on its ex-Soviet ally.

MOSCOW — Russian President Vladimir Putin hosted the leader of Belarus on Friday for another round of difficult talks on closer integration amid Moscow’s mounting economic pressure on its ex-Soviet ally.

Belarusian President Alexander Lukashenko has accused the Kremlin of flouting Russian commitments for energy supplies while trying to strong-arm him into a closer alliance. Some in Belarus fear that the Russian leader could be eyeing a full merger of the two nations in order to extend his rule.

Lukashenko and Putin smiled broadly as they sat down for talks at Putin’s residence in Russia’s Black Sea resort of Sochi.

“I think it will be a fruitful day,” Putin said after the two leaders met one-to-one. Aides would join them at a second meeting, he said.

Lukashenko noted that along with discussing the Russia-Belarus alliance, he and Putin touched on issues related to other ex-Soviet nations.

The Kremlin has argued that Belarus, which relies on Russia for most of its energy needs, should accept greater economic integration if it wants to continue receiving Russian resources at subsidized prices.

Putin’s deputy chief of staff Dmitry Kozak said late Friday that oil, which Russia cut off at the start of the year, can be supplied to Belarus only at market prices. But he said an agreement was reached to supply natural gas for 2020 at the same price as last year, $127 per 1,000 cubic meters.

He also said the leaders agreed that talks on integration would continue.

In the evening, Putin and Lukashenko played ice hockey in a gesture of friendship. Both leaders long have practiced the sport, and played several times together in recent years.

Putin and Lukashenko met twice in December, but failed to resolve their differences.

Transit shipments of Russian crude to Europe via Belarus have continued unimpeded, but Belarusian oil refineries have been reduced to a minimum capacity, depriving the country of a major source of income. In the past, Belarus cashed in on exports of petroleum products made from cheap Russian oil.

Earlier this week, Lukashenko boasted about warming ties with the U.S. in an apparent bid to win concessions from Russia. He claimed his weekend meeting with U.S. Secretary of State Mike Pompeo vexed Moscow.

Pompeo, the first U.S. secretary of state to visit Belarus in 26 years, said the United States could provide Belarus with 100% of its oil and gas needs and noted that it wants to help Belarus uphold its sovereignty.

Lukashenko, who in the past was dubbed “Europe’s last dictator,” has ruled Belarus for more than a quarter of a century, stifling dissent and extending his rule through votes the West has dismissed as flawed.

But he has increasingly reached out to the West in recent years amid tensions with Russia. The U.S. and the European Union have lifted some of their sanctions as Belarus freed political prisoners.

Lukashenko has bristled at the Kremlin pressure, charging that some Russian officials want to push Belarus into surrendering its sovereignty.

Russia and Belarus signed a union agreement in 1997 that envisaged close political, economic and military ties, but stopped short of forming a single nation.

Many in Belarus fear that Putin, who has been in power for two decades, could be seeking a merger with Belarus as a way to continue calling the shots as head of the Russia-Belarus union state after his current Russian presidential term expires in 2024.

Hyundai Recalls Cars for Problem That Can Cause Engine Fires

India’s soldiers ‘not ready for women in combat’