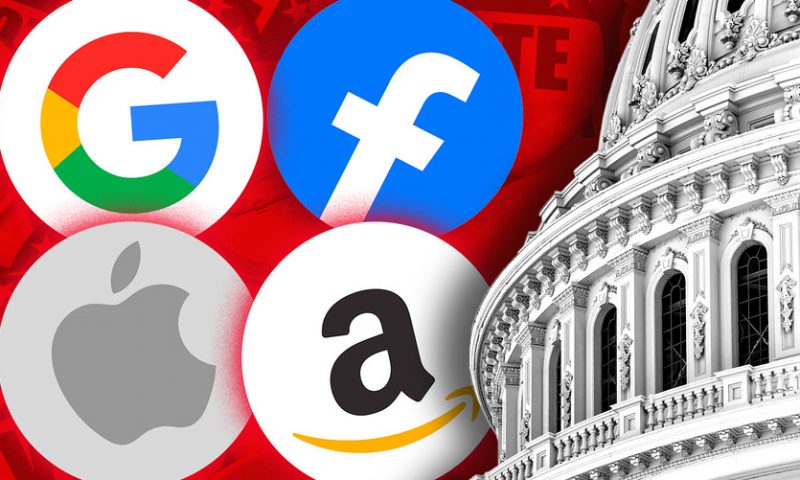 Facebook, Alphabet, Apple and Amazon remain in a holding pattern as revenue continues to pile up, and stock prices and market values soar

They face federal antitrust probes from the Justice Department and Federal Trade Commission, a separate investigation by 47 state attorneys general, the launch of the toughest data-privacy law in the nation’s history, and an angry mob of politicians ranging from the extreme right to the far left.

And yet it was business as usual in 2019 for Alphabet Inc. GOOGL, -0.02% GOOG, +0.07%, Amazon.com Inc. AMZN, +0.05%, Apple Inc. AAPL, +0.73%, and Facebook Inc. FB, +0.41%, the four Big Tech companies with big targets on their backs. Revenue continued to pile up, stock prices and market values soared, and they inhaled startups to expand their growing digital empires. They end the year worth more than $3.5 trillion collectively, thanks to stock gains ranging from about 25% for Amazon to a whopping 85% for Apple.

Amid all the big talk about investigations and recriminations, legal experts and politicians interviewed by MarketWatch expect that the status quo will continue in 2020, at least until the presidential election in November. What few details that have emerged — the FTC is considering seeking an injunction against Facebook for how it integrates its apps, and the Justice Department is reportedly looking at Google’s YouTube — could prompt some incremental changes. Facebook, for example, has taken several voluntary actions to appease antitrust concerns in the form of a new tool that lets consumers transfer photos to Google and other services.

But self-imposed actions such as those are unlikely to go deep, according to interviews with a dozen legal experts, politicians and Big Tech representatives, and nowhere near potential government actions, such as Facebook being forced by the FTC to spin off Instagram and WhatsApp, or Amazon splitting off its cloud division, Amazon Web Services. Those types of big moves are sheer fantasy in the current climate of political gridlock, where regulatory action and national legislation could be years away.

“Do they continue to act with impunity? Does the 2020 election change the calculus? There will be marginal changes on both counts,” Andrew Jay Schwartzman, senior counselor with the Benton Institute for Broadband & Society, told MarketWatch. “I don’t see any signs the companies are compelled to make fundamental changes in the course they have been following.”

Officially, as has mostly been the case since news of the antitrust probes surfaced in June, all four companies were conspicuously silent. They had no comment when contacted by MarketWatch.

There are other signs of incremental self regulation — YouTube on Dec. 11 announced a more rigorous anti-harassment policy, and Facebook plans to spend $130 million over six years on a Supreme Court-like group of advisers to help it filter objectionable content from its platform — but tech companies seem wary to make any big changes in response to the backlash.

“There’s an old adage in legal policy: If you change your behavior during an investigation, it is tacit acknowledgment that you’re doing something wrong,” said Herbert Hovenkamp, a professor at the University of Pennsylvania who teaches at its law and business schools.

If there are to be any major changes in 2020, experts say, they are likely to fall into three categories: blocking of acquisitions, new privacy legislation in the mold of California’s landmark new law, and punitive actions from antitrust investigations.

The Big Four’s unadulterated acquisitions have stoked the antagonism, with the latest tempest being Google’s proposed $2.1 billion acquisition of Fitbit Inc. FIT, +2.02%.

“By attempting this deal at this moment, Google is signaling that it will continue to flex and expand its power in spite of this immense scrutiny,” Rep. David Cicilline, D-R.I., chairman of the House Antitrust Subcommittee, said in a November statement. “Google’s proposed acquisition of Fitbit would also give the company deep insights into Americans’ most sensitive information — such as their health and location data — threatening to further entrench its market power online.”

If you’re keeping score at home, Google’s voracious appetite for startups — more than 270, including an average of 34 a year between 2011 and 2014 — has included direct competitors YouTube; DoubleClick, an online advertiser; AdMob, a mobile advertising company; and Waze. (In June, Google snapped up big-data company Looker for $2.6 billion.) Just one acquisition, travel search firm ITA, was challenged by the government before it was conditionally approved, according to Tim Wu, a professor of law, science, and technology at Columbia University.

Facebook has devoured nearly 100 companies — many of them competitors that included WhatsApp and Instagram — since 2007 without the federal government challenging one purchase. It shut down at least 39 companies, some of which may have represented future competitors, said Wu.

Compelling evidence, yes. But not enough to provoke regulatory action under current merger laws, said Hovenkamp. Most law focuses on mega-companies joining forces in the same market, not a larger company buying a startup or extending into new markets. “Merger laws do not touch on the prediction of smaller companies becoming successful competitors to their buyer,” he said.

It will take nothing short of “radical” legislation, Hovenkamp and others contend, to change the behavior of big tech.

“We can’t leave it to [Big Tech] to self-regulate,” Rep. Ro Khanna, D-Calif., whose district is in the heart of Silicon Valley, told MarketWatch in a phone interview. “We can’t simply trust for-profit companies to safeguard the privacy and data rights of consumers… Congress has to act.”

The handful of contending bills are led by the Consumer Online Privacy Rights Act (COPRA), co-sponsored by Sens. Maria Cantwell, D-Wash., Brian Schatz, D-Hawaii, Amy Klobuchar, D-Minn., and Ed Markey, D-Mass. The bill would grant citizens the right to request their information from companies and ask for data to be deleted or corrected. It would also make companies responsible for getting permission to collect and share sensitive data, which includes biometric information and precise locations.

“In the growing online world, consumers deserve two things: privacy rights and a strong law to enforce them,” Cantwell said in a statement. “They should be like your Miranda rights — clear as a bell as to what they are and what constitutes a violation.”

A competing bill from Sen. Roger Wicker, R-Miss., called the United States Consumer Data Privacy Act (USCDPA), would set nationwide rules for handling of personal information online and elsewhere and override state laws, including one in California set to take effect in the new year.

“American consumers deserve a strong national standard for the protection of their data, and American companies need certainty in order to continue innovating and competing with the rest of the world,” Wicker said in a statement.

Whether any bills make it into law is another matter, given the fractious nature of Congress. In the interim, the best bet for consumers is the California Consumer Privacy Act, the nation’s toughest privacy law, which goes into effect on Jan. 1 but isn’t likely to be enforced until mid-year. It has already drawn angst from Facebook, Google and others, which unsuccessfully tried to water down its final version with amendments, and other states hope to emulate it. (Ominously, 44% of 625 business owners and company executives polled by security company ESET said they have never heard of CCPA.)

While non-profit organizations such as the Electronic Frontier Foundation have embraced CCPA, the tech industry is begrudgingly trying to adapt to it. Facebook on Dec. 12 said it does not plan to change its web-tracking practices to adhere to CCPA because its practices are in compliance with the new law restricting “sale” of user data.

Those in the tech community familiar with CCPA, have “raced to put processes and systems in place to meet cumbersome CCPA requirements,” Gary Shapiro, CEO of the Consumer Technology Association, which represents more than 2,200 U.S. tech companies, said in a statement. “CTA welcomes California Attorney General Xavier Becerra’s efforts to clarify aspects of the CCPA and supports proposals that provide flexibility to ease companies’ compliance burdens. A common-sense federal privacy law would also be welcome [so that] startups, entrepreneurs and all businesses can follow a uniform set of principles to protect consumer data.”

This month [DEC. 10], U.S. Attorney General William Barr said antitrust probes into Big Tech could conclude next year, though he ominously warned the investigation would extend beyond antitrust to “other behaviors.” Barr’s timeline of completed regulatory investigations this year underpins the theory among some antitrust experts that regulatory actions could happen in 2020.

“There is so much pressure on the DoJ and FTC from Congress to take action, and I think they will, on one company each,” Avery Gardiner, senior fellow for competition, data, and power at the Center for Democracy Technology, told MarketWatch. She expects actions along the lines of the conduct restrictions Microsoft MSFT, +0.07% received from the DoJ in 2001 after years of legal wrangling.

She just isn’t sure which companies will be penalized. The FTC is examining Facebook and Amazon; the DoJ is looking into Apple and Google.

Ultimately, antitrust actions will be based on established theories in which judges rule on precedent, she said. “I don’t think we’ll see broad antitrust legislation,” Gardiner said. “We have enough laws. They haven’t been enforced, but could now because of this politicized environment.”

Charlotte Slaiman, competition policy counsel at consumer advocacy group Public Knowledge, believes existing antitrust laws are not enough. It will take federal legislation, she contends, for Big Tech to “change their policies in accordance with the law. Self-regulation is not enough,” she said.

Slaiman is particularly hopeful about the Augmenting Compatibility and Competition by Enabling Service Switching (ACCESS) Act, co-sponsored by Sens. Mark Warner, D-Va., Richard Blumenthal, D-Conn., and Josh Hawley, R-Mo. It would require “the largest companies to make user data portable — and their services interoperable — with other platforms, and to allow users to designate a trusted third-party service to manage their privacy and account settings.”

Round and round it goes: Tech companies aren’t likely to budge in their behavior as investigations and legislation slowly wend their way through the process.

“Federal and state investigations are likely to take a very long time. Years, not months,” Schwartzman said. “And I don’t see a consensus for any significant legislation that will affect companies in the next year or two regarding privacy.”