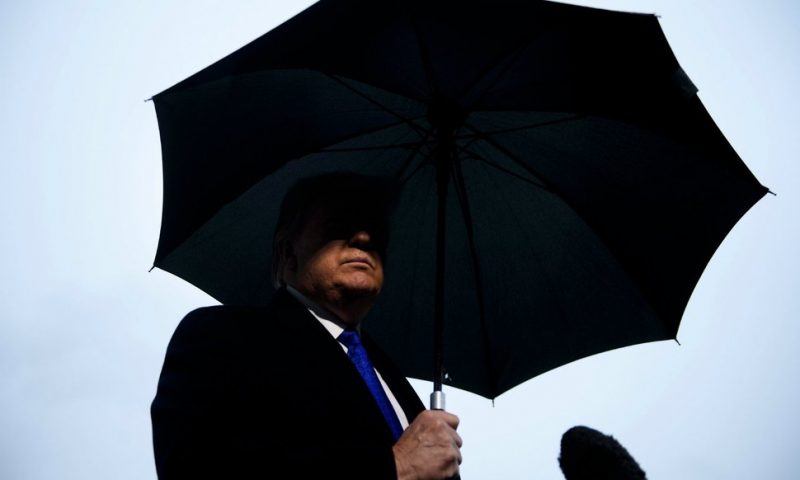 The U.S. president has promised not to interfere, but Prime Minister Boris Johnson is bracing for impact as Britons plan protests.

LONDON — PRESIDENT Donald Trump arrives in the United Kingdom on Monday night for a two-day visit, just 10 days before British voters cast their ballots on Dec. 12 in a general election. And that’s a potential headache for Prime Minister Boris Johnson, whose Conservative Party is currently leading in the polls.

The problem for Johnson is that Trump’s a big fan — a fact that may not play well among voters in a country where the president of the United States is widely disliked.

“It’s certainly possible that he’ll come here and say something positive about Johnson,” says Paul Webb, a politics professor at the University of Sussex. “And Trump’s standing here is so low that might have a negative effect.”

Trump has already publicly planted a wet kiss on Johnson. On Oct. 31, in a radio interview with Nigel Farage, leader of the Brexit Party, Trump called Johnson a “fantastic man . . . the exact right guy for the times.” He also criticized Jeremy Corbyn, leader of the Labour Party: “Corbyn would be so bad for your country, he’d be so bad, he’d take you on such a bad way. He’d take you into such bad places.”

Trump’s London visit is for a 70th anniversary summit of NATO. Trump — who has a meager approval rating here of just 18%— visited London last June and also in July 2018. Both times he was greeted with massive protests that saw hundreds of thousands of Britons take to the streets. And a large, anti-Trump protest is again planned for Tuesday evening as the NATO leaders attend a reception at Buckingham Palace.

Even if Trump takes the hint and avoids making a pitch for Johnson’s election, he may talk up the prospects of a putative U.S.-UK trade deal, once Britain’s long-delayed exit, or Brexit, from the European Union occurs. But that’s a thorny issue for Johnson, as well.

Last week Corbyn released 451 pages of unredacted government records of high-level trade discussions between the two countries that indicated that trade negotiations could include opening the UK to higher-priced American pharmaceuticals and to U.S. health insurers. Corbyn claimed the documents prove the National Health Service could be “for sale” under a post-Brexit Johnson government.

While this election is often seen as dominated by Brexit — with Johnson promising to leave the EU by the end of next year, and Corbyn saying he’ll negotiate a better deal and put it to the voters — several polls show that many voters think the NHS is the more important issue. It is the third rail in British politics — most Britons want it better funded, not privatized.

It’s been chronically underfunded over the last nine years of Conservative-led governments and is now critically understaffed and struggling to keep up with demand. Yet it remains a much-beloved institution. Both main parties have pledged to pour huge sums into the health system if they win, though Labour’s pledge of increasing its budget to $200 billion by 2023-2024 is nearly $8 billion more than what the Tories promise.[

Johnson says claims that he’s willing to make the NHS part of a trade deal are “total nonsense.” But Johnson’s long history of lying tends to make voters wary of his promises. “There is not a lot of widespread love or trust for Johnson,” Webb says. “And the NHS is a sore point, one where Labour is trusted more than the Tories already.”

Moreover, when Trump was here last June, he said the NHS would be on the table in trade talks, though he walked back that comment a day later.

Accordingly, Tuesday’s anti-Trump protests will be led by NHS staffers, including doctors and nurses, to whom American intervention in the health service is anathema.

Polls indicate that Johnson’s Conservatives will win the election. Labour’s campaign has mainly been hindered by two things: Corbyn is even more unpopular than Johnson, and his party’s Brexit stance is so vague it hasn’t galvanized support among anti-Brexit voters.

But it still remains an open question whether the Tories will win big enough to capture a majority of seats in Parliament, which Johnson needs to win approval for a Brexit deal.

A deep-dive YouGov poll last week found that the Tories could gain a majority of 68 seats, but many polls since show a tightening race. For instance, a Savanta ComRes poll claimed the Conservative lead over Labour had slimmed to just 7 percentage points. If that’s accurate, Webb calculates, it would leave the Conservatives eight to 10 seats short.

“There is still time for stuff to change,” he says. “It’s not done and dusted.”