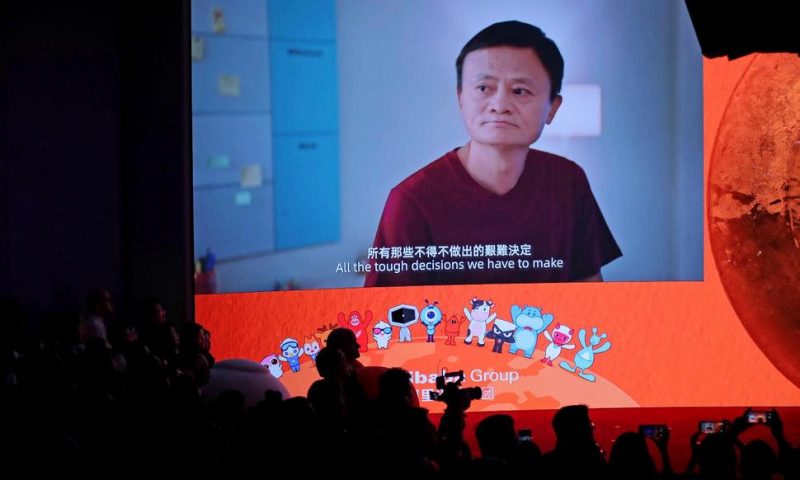 HONG KONG — Chinese e-commerce giant Alibaba’s shares jumped 6.6% in their debut on the Hong Kong stock exchange on Tuesday, an auspicious start at a time when the former British colony is reeling from political unrest.

The company’s shares already are listed in New York, where its 2014 IPO set a record at $25 billion.

This offering of 500 million new shares raised more than $11 billion in Hong Kong’s biggest listing since 2010 — a rare boost for the city after months of political unrest.

Charles Li, executive director and chief executive of Hong Kong Stock Exchanges praised the company for carrying out the listing.

“I am very thankful that Alibaba, after five years of traveling afar, finally came home. I’m also grateful that they choose to come despite the difficulties, despite the challenges that we are going through here in Hong Kong,” Li said.

The closing price Monday for Alibaba’s New York-traded shares was $190.45 per share. Each of the U.S. shares is the equivalent of eight Hong Kong shares, which would put the price in Hong Kong terms at 186.30 Hong Kong dollars per share.

“The largest listing of the year comes at a worrying time for Hong Kong but everything appears to have gone very smoothly,” Craig Erlam of OANDA said in a commentary.

“This was an opportunity to show that, despite the protests that have brought Hong Kong to a standstill and wreaked havoc on the economy, it’s business as usual for the stock exchange,” he said.

Alibaba’s 55-year-old founder, Jack Ma, is China’s richest entrepreneur with a net worth of $39 billion, according to the Hurun Report, which tracks the country’s wealthy.

The company’s share code, 9988, is a homonym in Chinese for “eternal prosperity.”

It already has a significant cash pile of more than $30 billion, but is tapping the momentum from recent strong earnings, including the $38.4 billion it reported in “Singles Day” sales on Nov. 11, up 26% from a year earlier.

If a “greenshoe” overallotment option is exercised, the proceeds from the offering could be nearly $13 billion.

Alibaba says the proceeds from the share sale will be used to promote strategies to expand its users, help businesses with “digital transformation, and continue to innovate and invest for the long term.”

The company’s 2014 initial public offering was held in the U.S. due to regulatory limitations that prevented an IPO in Hong Kong.

Ma stepped down as chairman in September but is a member of the Alibaba Partnership, a 36-member group with the right to nominate a majority of the company’s board of directors.