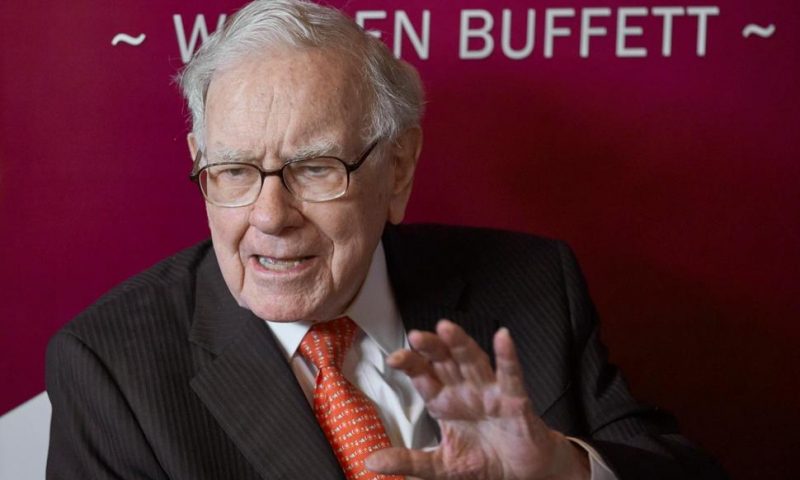 Warren Buffett’s company reported an 11% decline in third-quarter profits because of a change in the paper value of its investments.

OMAHA, Neb. — Warren Buffett’s company reported Saturday that it saw an 11% decline in third-quarter profits because of a smaller increase in the paper value of its investments, even as it sits on a mountain of cash.

Analysts surveyed by FactSet expected operating earnings per share of $4,299.20 on average.

Berkshire Hathaway recorded an $8.67 billion paper investment gain during the quarter. A year ago, it registered an unrealized $11.66 billion investment gain.

Edward Jones analyst Jim Shanahan said the results look good overall despite the ongoing challenges of the U.S. trade war with China and weakness in manufacturing, but it’s disappointing that Berkshire didn’t find a way to use more of its cash.

Berkshire is sitting on a pile of more than $128 billion cash because Buffett has struggled to find major acquisitions for the company recently. Buffett said Berkshire completed a $10 billion investment in Occidental Petroleum and repurchased about $700 million of its shares during the quarter.

“Whenever this market pulls back meaningfully, they’ll have a lot of capacity to put cash to work,” Shanahan said.

Berkshire said its BNSF railroad added $1.466 billion net income during the quarter, up from $1.393 billion a year ago, as it reduced costs as volume slowed.

Berkshire’s utilities generated $1.18 billion net income, up from $1.09 billion a year ago.

The company’s insurance units, which include Geico, generated $1.48 billion in investment income, up from $1.24 billion a year ago.

Berkshire recorded a $467 million gain on its Kraft Heinz investment during the quarter after the food company released its earnings for the first half of the year in August. Earlier in the year, Berkshire omitted Kraft Heinz from its first two quarterly reports while Kraft Heinz reviewed and restated its earnings after it announced a $15.4 billion writedown in the value of its brands.

Berkshire Hathaway Inc. owns more than 90 companies, including BNSF railroad and clothing, furniture and jewelry businesses. Its insurance and utility businesses typically account for more than half of the company’s operating income. The company also has major investments in such companies as Apple, American Express, Coca-Cola and Wells Fargo & Co.

Why the oil market’s ‘risk premium’ has disappeared — for now