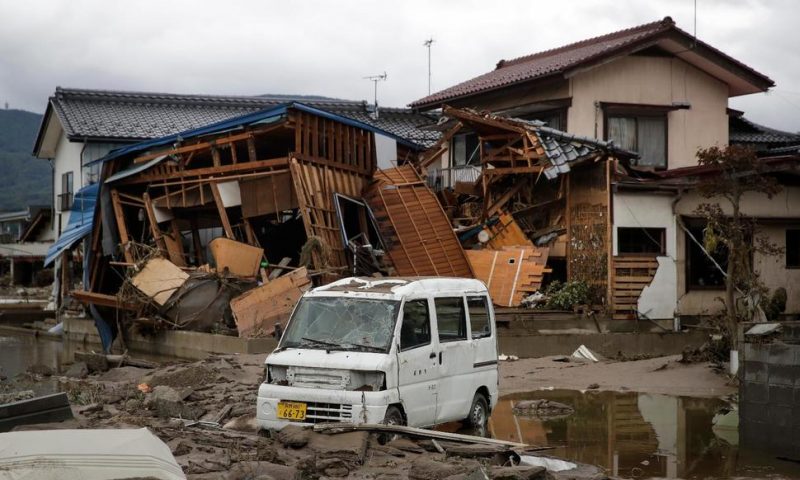 But nothing spoke more of the powerlessness of modernization against natural disasters than rows of bullet trains deluged in floodwaters in Nagano, a mountainous region to the northwest of Tokyo.

Japan’s technological prowess and meticulous attention to detail are sometimes no match for rising risks in a precarious era of climate change.

Experts say they also instill a false sense of security in a country inured to danger by the constant threat of calamitous earthquakes, tsunami and volcanos.

“Weather conditions in Japan up to now have been relatively moderate,” said Toshitaka Katada, a disaster expert and professor at the University of Tokyo.

Those days are over, and Japan’s readiness for disasters, still based on data collected decades ago, hasn’t kept up with the times, he said.

“Damage gets multiplied when people are overly confident about their safety,” Katada said.

With increasingly extreme weather, the government, businesses and individuals need to rethink their preparedness.

Rescue efforts continued Tuesday, three days after the typhoon made landfall near Tokyo and then swerved northward before moving over the Pacific as a tropical storm. The casualty counts were climbing, with dozens dead, more missing and some 100 people injured in Nagano, Fukushima, Miyagi and other central and northern prefectures.

At least 10 Shinkansen trains, each consisting of 12 cars, were damaged by the flooding at a depot in Nagano, said East Japan Railway Co. spokesman Yuji Ishikawa.

Evacuation orders were still in effect, so details were still unclear. But electronic equipment underneath the carriages was likely totally wrecked, he said.

The scientific community has been warning about the trend toward more extreme weather for years, including intensifying cyclones.

Many of the casualties from natural disasters, especially landslides and flooding, reflect the vulnerability of Japanese communities, businesses and public infrastructure to torrential rains and other conditions that were not considered when homes and other facilities were built.

Despite increasingly accurate forecasts, it’s still difficult to predict the exact track of storms and the potential damage they may bring, said Chris Field, director at the Woods Institute for the Environment at Stanford University.

“The message for typhoon-prone areas is that all should prepare for a future of stronger storms,” Field said.

“It is important to understand and respond to the evidence that storms are getting stronger as a result of climate change and that investments in disaster prevention need to rise, now more than ever,” he said.

Japan already is in crisis over its aging and inadequately maintained infrastructure. Governments lack the funding and manpower to refurbish and replace tunnels, bridges and other structures to meet improved standards for resistance to earthquakes and other disasters.

On top of that, there’s an urgent need to improve early warning systems, build bigger seawalls and help people relocate out of vulnerable areas, Field and other experts said.

In Nagano and other areas, homes and fields that normally would be protected were inundated when swollen rivers breached dikes and levees build for the less severe flooding of earlier times.

The authorities issued clear and early warnings about the perils of the approaching typhoon, holding an emergency news conference several days before the expected landfall.

“Please take measures to save your own life,” public broadcaster NHK announced, again and again.

In Miyagi, trucks circulated in neighborhoods urging people to evacuate, sirens wailed and smartphones were bombarded with emails urging evacuations.

But while evacuation advisories were issued to areas affecting as many as several million people, far fewer, in the tens of thousands, heeded those warnings.

Japanese need to be more aware of disaster risks and do more to prepare on their own instead of counting on the government to take care of them, experts said.

But fortifying such infrastructure is costly and will take time, maybe decades.

That means it’s better to escape even if you find out later that you didn’t need to flee.

“These days, we are having one big typhoon after another, and places that haven’t flooded in decades are now at risk,” he said.

“This is a serious problem. And so, to stay alive, you just have to get out.”

China Says Postal Fees to Rise After US Complaint