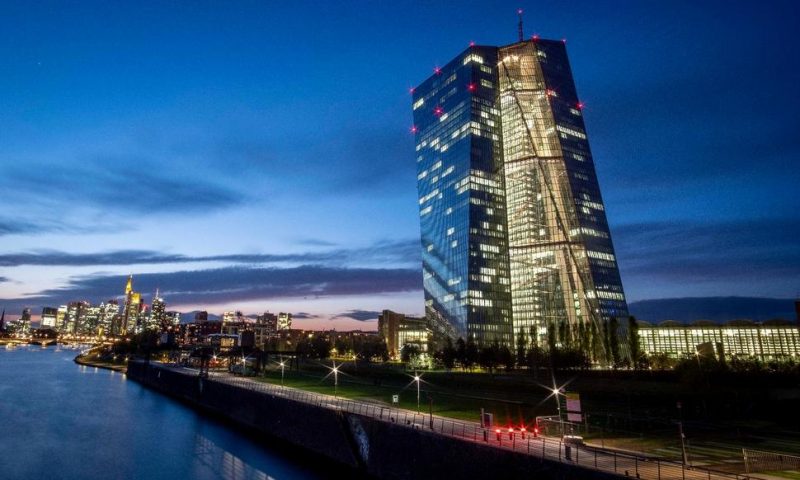 A number of European Central Bank officials objected at their last meeting to the decision to launch bond purchases to help the economy.

FRANKFURT, Germany — European Central Bank policymakers haggled extensively over several parts of the stimulus package unveiled at their meeting last month, with dissenters objecting to the relaunch of bond purchases aimed at lifting inflation and growth in the 19-country eurozone economy.

The written account of the Sept. 12 meeting, released Thursday, backed up recent evidence of an unusual amount of opposition to the decision to pump newly created money into the eurozone — divisions that could be a challenge for incoming ECB head Christine Lagarde.

The account says that “all members” agreed on the need for some kind of additional stimulus. But “a number of members assessed the case for renewed asset purchases as not sufficiently strong,” according to the account.

The dissident members — who were not named in the minutes — were quoted as saying that bond purchases would either be ineffective or should be held back as a last resort. The bank concluded a 2.6 trillion-euro ($2.9 trillion) bond purchase program only in December but decided to re-start purchases amid weakening economic data.

The 25-member governing council in the end decided by a “clear majority” to make bond purchases of 20 billion euros ($22 billion) a month and to cut a key interest benchmark, the rate on deposits the ECB takes from commercial banks, to minus 0.5% from minus 0.4%. The bank also said it would keep rates low indefinitely until inflation is clearly coming back in line with the bank’s goal of just under 2%.

Some members pushed for a different wording for the interest rate promise or for an even bigger rate cut but without the bond purchases. Others opposed any rate cut.

Central bank stimulus measures have wide-ranging effects on people, governments and companies. Low rates have made it cheaper for companies and governments to borrow, while pushing up the prices of assets such as stocks and real estate. Some observers have expressed concerns that such stimulus, if carried on too long, may inflate asset prices, leading to a painful collapse later on.

The export-focused eurozone economy is suffering a drop in growth due to the trade dispute between the U.S. and China, among other things. Yet with market interest rates already very low after years of central bank stimulus efforts, a debate has broken out about how much difference another blast of monetary support will make. Many bonds issued by eurozone governments, for instance, trade at negative interest yields.

Several ECB council members have publicly expressed disagreement with the extent of the stimulus package backed by President Mario Draghi. They included Klaas Knot from the Netherlands and Jens Weidmann of Germany, while German official Sabine Lautenschlaeger, a member of the top six-member executive board that runs the bank day to day, voiced opposition to bond purchases ahead of the meeting and resigned afterward – more than two years before the end of her term – without publicly stating a reason.

“It is not the first time in ECB history that there have been dissenting voices in the Governing Council, but they have rarely been as loud and persistent as they are now,” said Carsten Brzeski, chief economist for Germany at ING.

The stimulus measures have been widely criticized by economists and news media in Germany, where they are perceived as aiding financially weaker eurozone governments and as depriving savers of interest returns.

The dissenters are in the minority, up against Draghi, who has shown a willingness to deploy unconventional tools to support the eurozone economy, and against central bankers on the council from the southern European countries that have benefited from the stimulus efforts as they recover from the eurozone’s crisis over high debt.

Open dissent can be problematic for the central bank since it can sow doubts in financial markets over whether it is determined to stay its course. Draghi’s last day in office is Oct. 31 and designated successor Lagarde has indicated she supports his stimulus efforts.

Florian Hense, economist at Berenberg bank in London, said that “for ECB policy to be effective, Christine Lagarde will have to calm the debate and bridge the gaps when she starts her new job as ECB President in November.”

Brazil: No Bids Received for Oil Fields Near Coral Reef