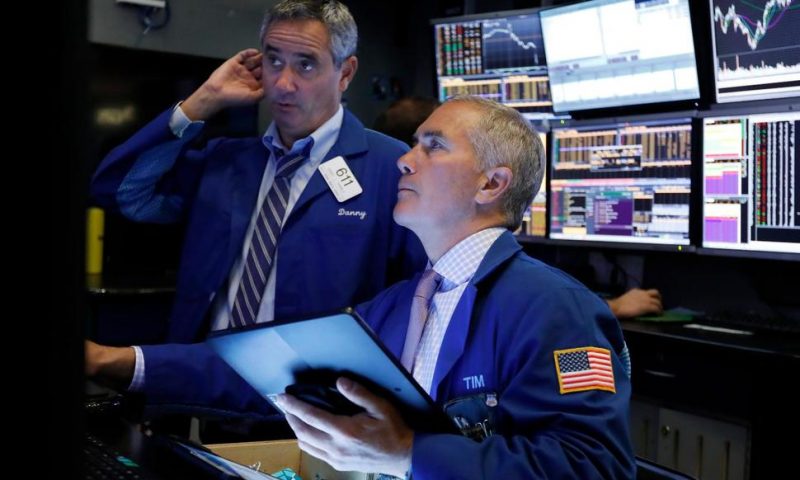 Stocks notched broad gains on Wall Street Wednesday as investors regained some of their optimism about the prospects for progress in the trade war between the U.S. and China.

Stocks notched broad gains Wednesday on Wall Street as investors regained some of their optimism about the prospects for progress in the trade war between the U.S. and China.

A day after escalating trade tensions led to a sharp sell-off, investors drew encouragement from reports that Beijing signaled it is open to a partial deal. Washington and Beijing are scheduled to begin a 13th round of trade negotiations on Thursday.

Technology stocks led the rally, which erased some of the market’s sharp losses from the day before and snapped a two-day losing streak for the S&P 500. The benchmark index is still on track to end the week with a 1.1% loss.

“Whichever way the trade winds tend to be blowing is the way the market tends to direct itself,” said Sam Stovall, chief investment strategist, CFRA. “Yesterday it was a worry that we would not really have any kind of success coming out of the upcoming trade talks. Now it sounds as if China would be willing to engage in some piecemeal accords.”

Bond yields rose, reflecting the move by investors to shift into higher-risk assets. The yield on the 10-year Treasury increased to 1.58% from 1.53% late Tuesday.

The major U.S. stock indexes rebounded from the get-go on Wednesday as traders turned more hopeful about the upcoming U.S.-China trade negotiations.

Washington and Beijing had held off from further escalating the conflict up until this week, when the U.S. blacklisted a group of Chinese technology companies over alleged human rights violations. The prospect of China being more open to a partial deal on trade helped allay investors’ concerns Wednesday.

The trade war between the U.S. and China has dragged on for 15 months, inflicting economic damage on both countries. The two sides have raised import duties on billions of dollars of each other’s goods, fueling fears their dispute might tip the global economy into recession.

All told, the Trump administration has imposed tariffs on more than $360 billion worth of Chinese goods and plans to tax an additional $160 billion of imports on Dec. 15. This would extend U.S. tariffs to just about everything China ships to the United States. China has counterpunched by taxing $120 billion in U.S. exports, notably soybeans and other farm goods.

Investors are hoping for some type of resolution as the 13th round of trade talks resume Thursday in Washington.

“Our base case, to which we assign a 50% probability, is for only modest progress in this round of talks,” said Mark Haefele, chief investment officer at UBS Global Wealth Management. “Modest progress averts further escalation while failing to resolve conflicts over intellectual property and subsidies.”

The sharp shifts in trade war rhetoric and actions have made for an extremely volatile market over the last few months. Despite the gains Wednesday, stocks are still on track for their fourth weekly loss in a row as uncertainty hangs over the markets.

Technology sector stocks led the gains Wednesday. The sector has been suffering most of the week because of uncertainty over the talks. Many of the companies rely on China for revenue and their supply chains. Microsoft rose 1.9% and Apple added 1.2%.

The health care sector also helped lift the market, along with energy stocks and companies that rely on consumer spending. Real estate companies and utilities lagged the market in a sign that investors were less interested in safe-play sectors.

Johnson & Johnson was among the biggest decliners in the S&P 500 after the health care company was ordered to pay $8 billion in punitive damages by a Philadelphia jury in a case involving the antipsychotic drug Risperdal. The stock lost 2.6%.

Next week, companies begin reporting their results for the third quarter. Expectations are generally low again, with analysts forecasting a drop of 4.1% from a year ago. The results, plus what CEOs say about their spending and revenue forecasts, should give a better picture of the economy’s potential direction.