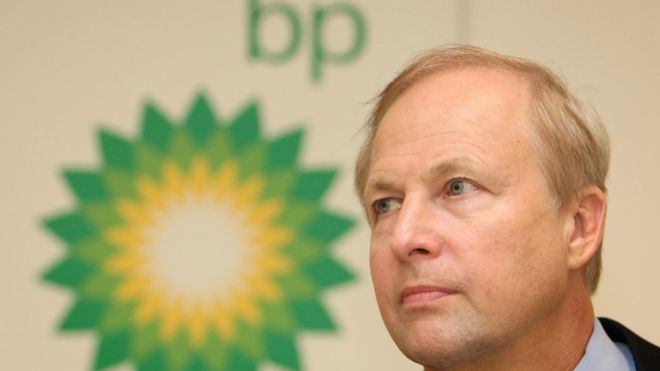 BP’s boss Bob Dudley is stepping down next year – and could receive up to £40m in shares after he leaves.

Mr Dudley, who spent 40 years with BP, has been chief executive for nine years, taking over after the Deepwater Horizon drilling accident.

In that time he has amassed 8.3m shares, currently worth £40m, in bonuses that he is yet to receive as they are linked to BP’s performance.

BP said he could only receive all the shares if every single target was hit.

Mr Dudley will be replaced by BP insider Bernard Looney in February.

Executive pay at BP was a contentious issue in 2016 when investors voted down a 20% pay increase for Mr Dudley.

The company’s latest annual report shows that during his period at the helm Mr Dudley received $118m (£95m) in cash and shares.

His outstanding bonus awards of shares are currently worth £40m, but the precise amount that Mr Dudley receives will be based on the company’s performance and the share price when they are released to him.

For example, over the past decade, he has received 80% of the shares he could have received and none on three occasions.

Mr Dudley is also waiving any right to pay and bonuses worth a possible $2.5m.

A BP spokesperson said: “The details of what shares Bob Dudley will eventually receive will be included in our remuneration reports over the next three years.

“How many of the possible maximum shares will be awarded will depend on BP’s performance against stringent measures over extended periods of time – this is designed to make sure that directors’ reward is aligned with shareholders’ interests.

“Bob Dudley could only receive the possible maximum number of shares set out in the annual report if BP performed to the maximum on every measure. “

The Deepwater Horizon drilling accident, in the Gulf of Mexico in April 2010, killed 11 workers and caused an environmental catastrophe.

It cost the oil company more than $60bn (£49bn) and caused extensive damage to its reputation.

Mr Lund said: “During his tenure he has led the recovery from the Deepwater Horizon accident, rebuilt BP as a stronger safer company and helped it re-earn its position as one of the leaders of the energy sector.

“This company – and indeed the whole industry – owes him a debt of gratitude”.

Only this week, the oil firm as embroiled in another controversy after Royal Shakespeare Company to end its partnership with BP after concerns were raised by students about the company’s impact on the environment.

It has faced other protests and in August, BP sold its last operation in Alaska but insisted this was not the result of pressure from environmental campaigners.

Mr Dudley said his successor was a “terrific choice to lead the company next”.

“He knows BP and our industry as well as anyone but is creative and not bound by traditional ways of working”.

Mr Looney, an Irish citizen, joined BP in 1991 after a degree in electrical engineering from University College Dublin.

Since 2016, he has been running the “upstream” part of BP since 2016, which produces about 2.6 million barrels equivalent of oil and gas a day.

The 49-year old, who grew up on a farm, has spoken out on mental health issues.

Last month, he told the industry publication Energy Voice said that his father suffered from depression and he had “decided to talk about the subject of mental health and my own experience”.

“The first thing we need to do is make it OK to talk about – end the stigma and make it a leadership act,” he said.

Mr Looney will be paid a salary of £1.3m, as well as bonuses and a pension allowance of 15% of his salary.

BP’s announcement comes at the end of a week that has seen several departures of high profile FTSE 100 bosses.

On Wednesday, Tesco’s chief executive Dave Lewis surprised investors when he said he would leave the supermarket chain next summer. He will be replaced by Ken Murphy, who has held senior roles in the group that owns chemist chain Boots.

Imperial Brands announced on Thursday that its chief executive, Alison Cooper, would be standing down. It has not yet named a replacement for Ms Cooper, who was one of the five women running a FTSE 100 company.