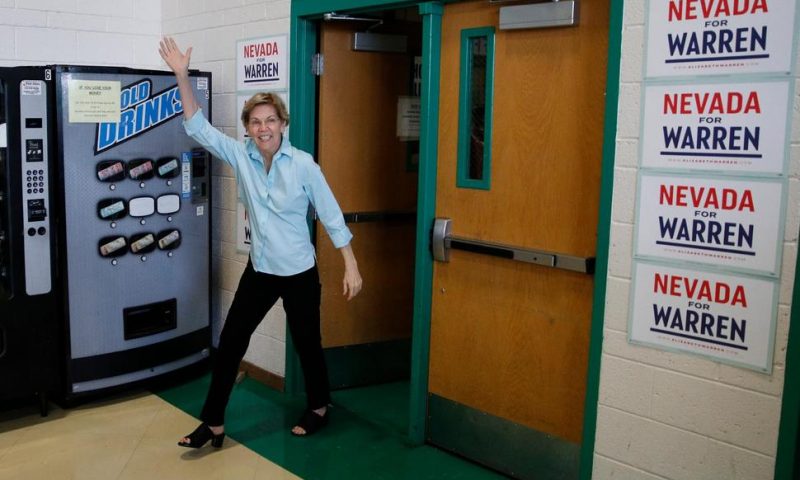 Housing woes are pushing into 2020 debate from Nevada and beyond as Democrats step up with ideas and proposed spending for affordable housing.

LAS VEGAS — Like many, Mario Wolthers was lured to Las Vegas a decade ago from California by cheaper housing costs. But when his apartment managers tried to raise his rent last spring, he moved in with a roommate.

“I’m a responsible taxpaying citizen,” said Wolthers, a 38-year-old elementary school teacher and Democrat. “I help a lot of kids out. I should at least be able to rent an apartment on my own or even afford a home.”

As the Democratic presidential candidates hustle for votes in Nevada, the third state on the 2020 voting calendar, they have been trying to answer Wolthers’ complaint. The contenders are cranking out housing plans, meeting with advocates and pledging to help bring down prices.

Their proposals have not dominated the campaign in the way that health care or immigration has. Still, they represent the seeds of a political debate likely to grow as high rents and home prices spread from expensive cities such as Los Angeles and New York to once-affordable pockets like Las Vegas and Reno.

“It’s affecting the overwhelming majority of the population here,” said Aria Overli of the housing-focused activist group Actionn, in Reno. Overli said she has lost track of the number of presidential campaigns she’s talked with about real estate costs.

Houses cost more than five times the typical household income — meaning they’re probably out of reach of most families — in one-seventh of the metro areas in the United States, according to Harvard’s Joint Center for Housing Studies. Rents are rising at twice the rate of inflation nationally.

On the West Coast, soaring rents and home prices have helped trigger a new wave of homelessness and a debate over solutions. President Donald Trump has used the crisis to criticize Democratic leadership in California. He’s suggested it may require federal intervention.

Democratic candidates have their own ideas.

Vermont Sen. Bernie Sanders recently came out with a plan in Las Vegas to spend $2.5 trillion over the next decade to improve public housing, combat homelessness and establish national rent control. Mayor Pete Buttigieg of South Bend, Indiana, who has proposed letting families “homestead” on abandoned land in cities, toured Reno with Actionn on Saturday to discuss housing.

In northern Nevada, Reno is a growing technology hub and a refuge for Californians fleeing that state’s high cost of living. Rents have increased by 35% in the past two years. A recent study ranked Reno’s county as the 66th least affordable in the nation, closing in on the tier that features notoriously expensive places such as San Francisco and Brooklyn, New York.

Las Vegas, once known as a place where people priced out of the American dream elsewhere could afford a house, is statistically more affordable than Reno. But it is seeing a spike in real estate prices as new residents have moved in. Home prices rose more than twice as quickly as wages in the past year, sharper than the national increase.

The city has among the highest rate of renters in the country, on par with New York City and San Francisco. That’s a sign that people cannot afford a first home, according to Jed Kolko, chief economist at the jobs site Indeed.

“Las Vegas had always been seen as a transient city but as we’ve grown and we’ve become more established, we have families staying here,” said Lalo Montoya of the activist group Make the Road Nevada.

Montoya moved to Las Vegas in 2016 from Denver, fleeing another once-affordable city that had become too expensive. He just found a new apartment after hunting around climbing rents and high move-in fees. “We’re all just one emergency away, a lot of us,” he said. “If it’s hard for me and that I have a stable job, then I can’t imagine how it must be for other hardworking folks.”

Nevada Democrats, who won control of the Legislature in November, passed laws to restrict late fees and offer tax credits for builders of low-income housing.

Housing proposals may play well in a Democratic primary. The party’s base of younger people, minorities and urban dwellers cares about housing and bears the brunt of the problem.

Highly technical solutions for housing also rarely fire up voters, said Jenny Schuetz of the Brookings Institute in Washington. “I don’t imagine anyone’s going to get up in the middle of a national debate and say we need to double HUD’s budget for vouchers,” she said.

But the signs of a political shift are there. Housing is no longer just a headache for the poor or big-city dweller, communities that rarely get attention in presidential campaigns.

“The problem of housing affordability has been moving up the income scale,” said Chris Herbert of Harvard’s Joint Center for Housing Studies. “It’s a problem of the working class who can’t afford housing. It’s taking on a different political tenor.”