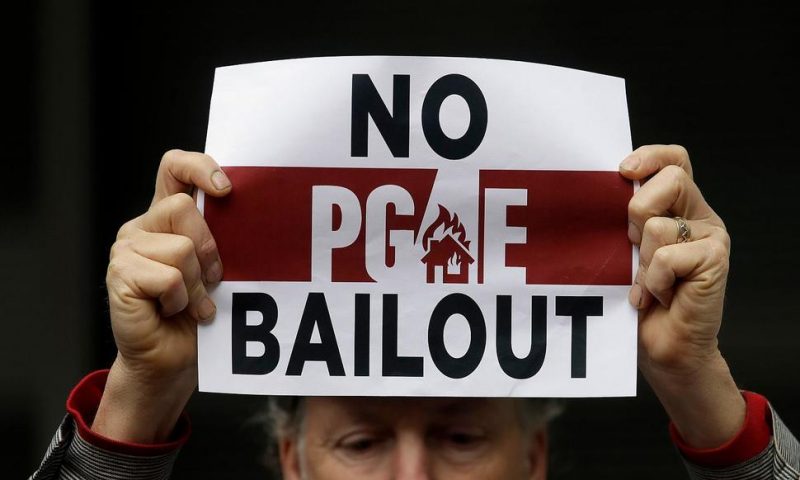 A group of insurance companies representing claims from 2017 and 2018 Northern California wildfires reached an $11 billion settlement with Pacific Gas & Electric.

SAN FRANCISCO — Pacific Gas & Electric has agreed to pay $11 billion to a group of insurance companies representing claimants from deadly Northern California wildfires in 2017 and 2018 as the company tries to emerge from bankruptcy, the utility announced Friday.

The utility said in a statement the tentative agreement was reached with insurance companies holding 85% of the insurance claims from fires that included the November 2018 blaze that destroyed the town of Paradise, killing 86 people.

It does not include thousands of uninsured and underinsured fire victims who have filed their own claims against PG&E, including for wrongful deaths.

The insurers said in a separate statement the settlement is well below the $20 billion the companies had sought in bankruptcy court, although it is more than PG&E offered as part of a filing in bankruptcy court earlier this week.

“While this proposed settlement does not fully satisfy the approximately $20 billion in group members’ unsecured claims, we hope that this compromise will pave the way for a plan of reorganization that allows PG&E to fairly compensate all victims and emerge from Chapter 11 by the June 2020 legislative deadline,” the insurers said.

The deal removes some of the uncertainty hanging over PG&E as it tries to climb out of its financial pit. The company’s stock rose nearly 11% Friday to close at $11.18.

“Today’s settlement is another step in doing what’s right for the communities, businesses, and individuals affected by the devastating wildfires,” PG&E CEO Bill Johnson said in a statement.

Two major outstanding questions still linger over the bankruptcy, said Michael Wara, a senior research scholar at Stanford University and a member of the state wildfire committee: How much PG&E will pay the outstanding fire victims, and whether a jury will find the utility liable for the 2017 wine country Tubbs fire that took 22 lives.

“It’s really hard to know what the PG&E bankruptcy resolution will look like. Because you don’t know how much money the company has to come up with,” Wara said.

“We want to avoid having ratepayers get punished for this bankruptcy, but the company provides this essential service,” he said. “How that gets resolved is going to be a very tricky process.”

Gerald Singleton, an attorney representing more than 5,000 people whose homes were burned in Northern California wildfires started by the utility’s equipment between 2015 and 2018, said the settlement with insurance companies was a step in the right direction.

“Now we just have to get a fair amount for the individuals,” he added.

The settlement still must be approved by a bankruptcy court. PG&E Corp. on Monday released a plan to offer nearly $18 billion total to wildfire victims, insurance companies and cities and public entities in California that battled wildfires sparked by its electrical equipment.

That figure will now climb to nearly $20.5 billion, including:

— $11 billion for insurance companies as part of the tentative deal;

— $8.4 billion to pay wildfire claims from uninsured victims, which attorneys representing them had rejected as too low;

— $1 billion will go toward local governments affected by the wildfires.

While Friday’s announcement was a step toward resolving the bankruptcy, “it’s not necessarily a good outcome for shareholders,” said Travis Miller, an analyst with Morningstar, Inc.

The utility had talked about payments to the insurance group “in the $8 billion range. Instead they’ve agreed to $11 billion.”

The San Francisco-based company is under deadline pressure to emerge from bankruptcy by June 2020 to participate in a state wildfire fund to help California’s major utilities pay out future claims as climate change makes wildfires across the U.S. West more frequent and more destructive.

The utility sought bankruptcy protection in January because it said it could not afford an estimated $30 billion in potential damages from lawsuits stemming from recent wildfires.

Yes, Stocks Are up Again. No, Recession Worries Aren’t Gone