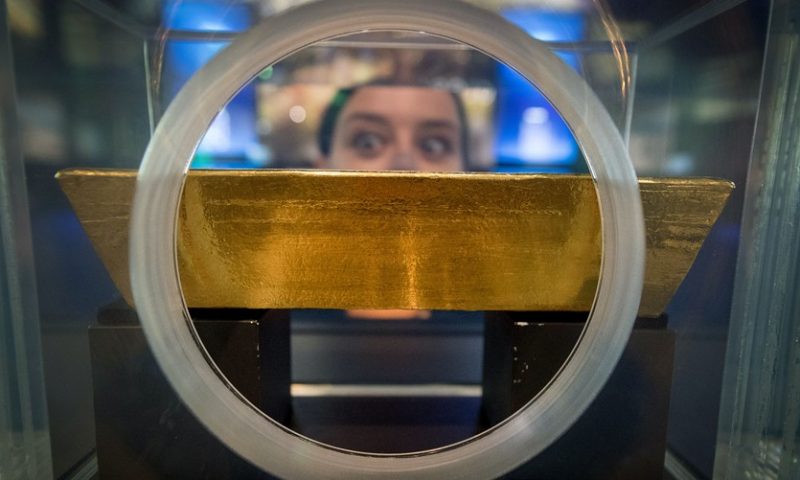 Gold futures settled lower Monday, giving back earlier gains to extend their losses to a third session in a row, as a rise in U.S. Treasury yields weighed on the precious metal’s haven appeal, ahead of key central bank meetings this week and next.

The gold market saw “a little bit of profit-taking and consolidating around $1,500,” said Jeff Wright, executive vice president of GoldMining Inc. He said no asset considered a haven performed well in Monday trade.

The market’s awaiting news from the European Central Bank, which meets Thursday, as well as from the Federal Reserve, which meets next week, he added.

Some commodity experts remain bullish and point to gold’s trade above the $1,500-an-ounce mark as the demarcation line between bullish and bearish momentum in the commodity.

“The main trend remains positive, even though prices are now playing with the psychological level of $1,500 and there could be space for a further correction to around $1,475, without affecting the main bullish trend,” wrote Carlo Alberto De Casa, chief analyst at brokerage ActivTrades, in a daily research note.

As for silver, which had enjoyed a powerful uptrend, up more than 11% last month — outperforming gold’s monthly rally last month, up 6.4% — De Casa says its gains may have come too quickly and expects that prices for the gray metal “are likely to consolidate around these levels, before any further rebound attempt.”

Treasury yields rose Monday, with the yield on the 10-year Treasury note TMUBMUSD10Y, -0.83% up 6 basis points at 1.6114%. Rising bond yields can dull the luster of gold, which offers no yield.

Gold and silver have been supported by worries about anemic economic growth internationally and concerns that, combined with a Sino-American trade war, sluggish expansion may wash up on U.S. shores. On top of that, bond yields globally have offered rates that are ultralow or less than 0%, which also has bolstered appetite for precious metals which don’t bear a yield.

Last week, stocks gained some traction higher as Federal Reserve Chairman Jerome Powell said the job report is a sign of continued strength in the labor market. He also said the outlook for the economy remains favorable and the Federal Reserve is “not forecasting or expecting a recession.”

Closely watched employment data on Friday showed that the U.S. created a lackluster 130,000 new jobs in August, adding to evidence that hiring has slowed sharply in 2019. The increase in new jobs fell well short of the 170,000 MarketWatch forecast.

Share of Uninsured Americans Rises for 1st Time in a Decade