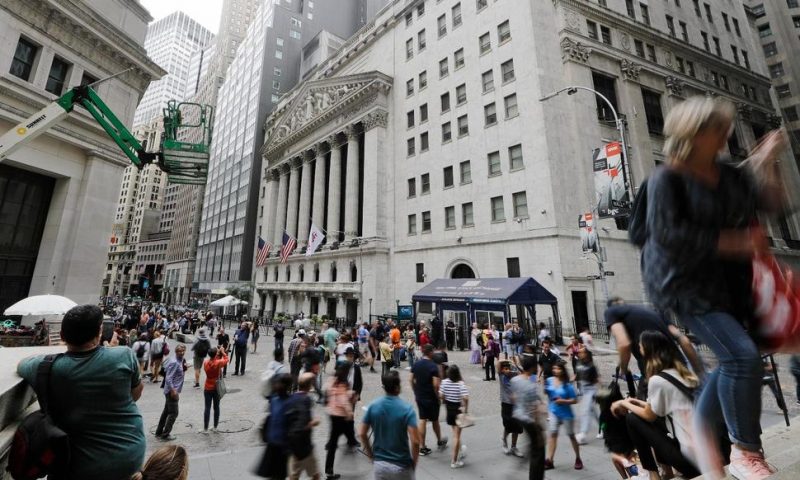 The market shook off an early stumble thanks largely to gains in health care stocks, makers of consumer products and retailers. Technology, communications and utilities stocks fell, as did bond yields and gold prices.

The jobs report was the latest in a mixed batch of economic data that investors scrutinized this week in search of clues about how the economy is weathering the costly trade war between the U.S. and China. Their concern: tariffs that each side has imposed on billions of goods may be dampening global economic growth and threatening to nudge the United States into a recession.

Mixed economic data aside, investors have been encouraged this week by news that envoys from Washington and Beijing plan to begin another round of trade talks next month.

“It’s been a pretty bullish week and I’m a bit surprised the market has gone as far as it has,” said Randy Frederick, vice president of trading & derivatives at Charles Schwab. “I don’t think the trade tariffs issue is going to get resolved any time soon, and I don’t see that we’re a whole lot further along right now than where we were a month ago, when the market was significantly lower than it is.”

Markets have been turbulent in recent weeks as worries about the trade war have waxed and waned. Stocks sold off on Tuesday after expanded tariffs between Washington and Beijing kicked in and new data indicated that U.S. manufacturing contracted in August for the first time in three years.

But more encouraging economic reports on hiring by private companies and productivity, in addition to the planned resumption of trade negotiations, put investors in a buying mood that culminated in a strong market rally on Thursday. The S&P 500 ended the week at its highest level in five weeks and just 1.6% below its record set on July 26.

The market got a modest bounce Friday afternoon after Federal Reserve Chairman Jerome Powell said the central bank is not expecting a U.S. or global recession. In remarks at a conference in Switzerland, Powell noted that the Fed is monitoring a number of uncertainties, including trade conflicts, adding the Fed will “act as appropriate to sustain the expansion.”

Economists said Friday’s jobs report did little to change their forecasts for the Fed to cut interest rates at its meeting in two weeks. Treasury yields dipped following the report, and traders remain nearly certain that the Fed will cut short-term rates by a quarter of a percentage point.

It would be the second such cut since August, following nine increases since December 2015, as the central bank tries to cushion the blow on the economy from the U.S.-China trade war. U.S. manufacturing has already slid due to the tensions, and the worry is that businesses could pull back on their spending next.

The latest jobs data offered mixed signals about the economy.

The report also showed that the average length of the work week inched up to 34.4 hours after dipping in July to 34.3 hours. The bounce is good news, because when employers cut back on employee hours it can signal a coming pullback on hiring.

“The work week ticked up, so you’re not really concerned there’s a start of an uptick in unemployment,” said Tom Martin, senior portfolio manager with Globalt Investments. “That’s pretty positive.”

Modest Hiring Enough to Fuel Sluggish but Durable US Economy