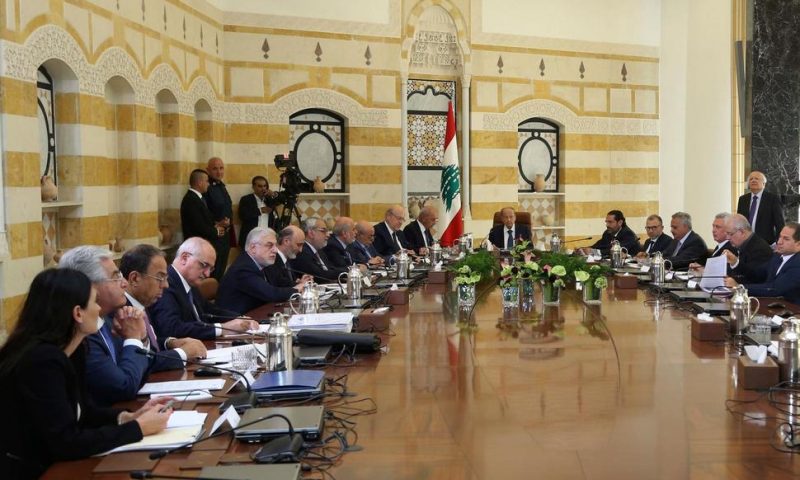 An international ratings agency is warning of risk that customer deposit flows could continue to decline in Lebanon resulting in an accelerated drawdown of foreign currency reserves.

BEIRUT — An international ratings agency warned Wednesday there is a risk that customer deposit flows, particularly by nonresidents, could continue to decline in Lebanon, resulting in an accelerated drawdown of foreign currency reserves that would test the highly indebted country’s ability to maintain the local currency peg to the U.S. dollar.

The country’s prime minister, however, pledged to keep the national currency pegged to the dollar, as it has been since 1997.

In an interview with CNBC, Saad Hariri said the government will not consider an International Monetary Fund program that would leave it to the markets to decide the price of the Lebanese pound.

“This is something that we have extreme sensitivity on,” Hariri said. “We believe that keeping the Lebanese pound at 1,500 (to the dollar) is the only stable way to move forward with these reforms.”

Standard & Poor’s said it estimates that Lebanon’s usable reserves will decline to $19.2 billion by the end of 2019, from $25.5 billion at the end of last year.

Lebanon has one of the world’s highest public debts, standing at 150% of gross domestic product. Growth has plummeted and the budget deficit has reached 11% of GDP and remittances from Lebanese living abroad shrank.

In February, Moody’s downgraded Lebanon’s issuer ratings to Caa1 from B3 while changing the outlook to stable from negative.

On Monday, the country’s political leaders declared what they called an “economic state of emergency” following a meeting aimed at finding a solution to the country’s economic crisis.

Hariri warned after that meeting that Lebanon could face the fate of Greece, which is still suffering from an economic crisis that began a decade ago.

Standard & Poor’s warned it could downgrade Lebanon in six months if the conditions don’t improve.

“In our view, the central bank’s foreign currency (FX) reserves remain sufficient to fund the government’s borrowing requirements and the country’s external deficit over the next 12 months,” Standard & Poor’s said. It warned that there is a risk that customer deposit flows could continue to decline, “resulting in an accelerated drawdown of FX reserves that would test the country’s ability to maintain the currency peg to the U.S. dollar.”

“A continuation of these trends during the next six months could trigger a downgrade to ‘CCC’ rating category,” Standard & Poor’s warned.

Hariri vowed in the interview with CNBC to fight corruption, adding that the Cabinet will work on bringing down the budget deficit to GDP to 7% in 2020.

US Trade Gap Fell 2.7% in July Including the Gap With China