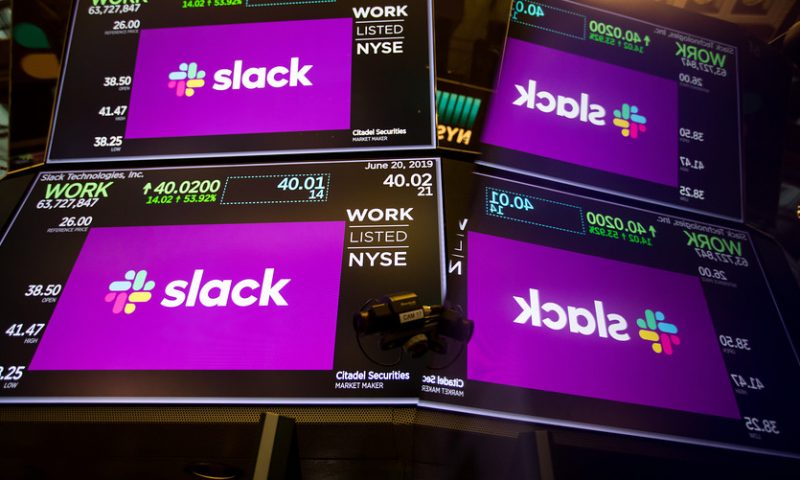 Slack Technologies Inc.’s first earnings report as a public company landed with a thud on Wednesday, pushing its already-depressed shares down 15% in after-hours trading.

The workplace-communications company reported second-quarter results that exceeded Wall Street estimates but forecast a slightly larger-than-expected loss for its current quarter, renewing concerns about its road to profitability and revenue growth. Slack said it expects to lose 8 cents to 9 cents a share; analysts polled by FactSet have estimated 7 cents.

“Slack has taken a positive first step right out of the gate, and we are encouraged by steady fundamentals and healthy guide,” MKM Partners analyst Rohit Kulkarni said in a note late Wednesday, in which he gave Slack shares a Buy rating and price target of $40. “However, Slack’s valuation [$14.5 billion] remains elevated. We expect investors to continue to apply premium valuation multiples as we expect Street estimates to grind higher.”

“We believe channel-based collaboration is so superior to email-based communication for work, that this shift is inevitable,” Slack CEO Stewart Butterfield said in a statement announcing the results.

It may be the fastest-growing software-as-a-service (SaaS) company ever, but Slack’s results following a disappointing direct public offering underscore deep-seated concerns among investors about its growth trajectory. After opening at $38.50 on June 20 and climbing to $42, shares have sunk to $31.01 after Wednesday’s market close, though they shot up 8% during regular trading. (The S&P 500 index SPX, +1.08%   has gained 17% this year.)

A major obstacle to Slack’s growth is Microsoft Corp. MSFT, +1.17%  , which includes the Teams work chat app in Office 365 business subscriptions. In July, Microsoft released statistics suggesting Teams is more widely used than Slack, largely because of adoption among companies that use Microsoft productivity software.

Less than 1% of Slack’s customer base is comprised of customers that spend more than $100,000 a year, according to Bloomberg Intelligence analyst Andrew Eisenson. Slack said it had 720 of those big spenders in the last quarter, up 75% year-over-year. The company surpassed 100,000 paid customers for the quarter.

“I want to emphasize the critical nature of true scalability for our enterprise customers,” Butterfield said in a conference call with analysts late Wednesday. “Only Slack’s Enterprise Grid product can support the scale and structure of the largest organizations in the world.”