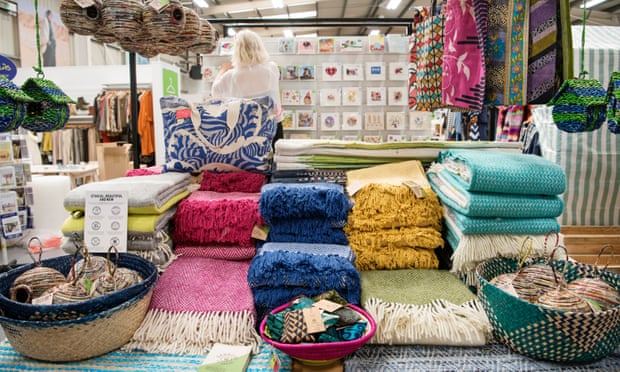 Outlet in Oxford industrial park, including on-site cafe, is aimed at turning perceptions on their head

Oxfam is to open its first superstore on the outskirts of Oxford in an experiment aimed at turning perceptions of charity shopping as outdated on their head.

On the edge of a sprawling business park off a ringroad to the south-east of the city, a squad of 20-plus staff and volunteers have been busy sorting through new merchandise and donations to stock the shop in readiness for its opening on 7 September.

Inside the entrance of the hangar-style industrial unit, about 12 times the size of the average Oxfam shop, a lengthy wall of display units is filled with products from its eco-friendly Sourced by Oxfam range including Fairtrade chocolate and coffee, bamboo coffee cups and lunchboxes and packs of Christmas cards.

Everything else is very different in the vast and airy space, which the charity wants to be more than just a shop. “Our aim is for this to be an enjoyable and fun ‘destination’ shopping experience,” says Oxfam’s trading director, Andrew Horton. “Customers will be able to shop ethically, but we want this new store to have the wow factor. We want people to linger, to chat over coffee. We have a 10-year lease on this unit and if it is successful we will roll it out in other locations.”

The space includes the first on-site cafe, which will serve a changing menu of “world foods” as well as tea and coffee. “The cafe will be at the heart of a new community space where we will host free talks and events for school groups, for example,” Horton said.

Oxford is, of course, where the charity was founded more than 75 years ago and the first Oxfam shop opened its doors there in 1948. It now has 610 shops in the UK, and a growing online operation, but logistics can be tricky in its shops in towns and city centres, where there is also intense competition among charity shops on the high street. The pilot superstore was inspired by the Swedish children’s charity Erikshjalpen, which created a larger-format store in an accessible location and not on a conventional retail park.

The Oxfam superstore’s neighbours include a Premier Inn and a David Lloyd fitness centre. “We decided that opening on a retail park would be a challenge – coping with typical opening hours of 10am to 8pm was going to be a tough ask in terms of staffing,” Horton said. “This suits us better and we will only open four days a week.”

A drive-in donation point at the rear of the shop is intended to make it easier for people to donate larger items and in bulk. Among other new ideas being tested are a “market stall” area with 12 booths for local ethical B Corps, lending libraries for electrical goods and others. Oxfam will also sell secondhand white goods for the first time, with a one-year warranty, through the local company Rework.

Oxfam has also emerged as an unlikely rising star on the UK’s fast-growing online fashion scene as it casts an increasingly canny eye over branded cast-offs and vintage styles handed in to its shops every day. There is a large mezzanine area in the new superstore devoted to online sales, where Oxfam will photograph high-value vintage fashion items, sought-after homeware and books and post them on Pinterest and other social media.

Oxfam’s operations manager, Emma Joy, says: “We take the view that people who donate want us to try and raise as much money as we can. Recently we received a brand new 1984 Sony Walkman still in its box which we sold online for £1,000.”

Cancer Research UK reopened its redesigned premium store on London’s Marylebone High Street in January, offering brands such as Chanel, Fendi, Gucci and Celine in an effort to upgrade the charity shopping experience. Barnardo’s has also given its homeware sections a modern makeover.

Amid the high street doom and gloom, UK charity shops have boosted UK retail sales, but Horton says Oxfam’s priority is to boost donations and the size of its volunteer workforce.

The national volunteer workforce is currently around 23,000 strong, and he is building a pool of 150 for the new store. Among them is Rosemary Shurgold, a retired health visitor who has volunteered at Oxfam’s Cowley Road shop for 12 years. “I love Oxfam and I absolutely love this new store,” she smiles. “You’d have to pay me to stay away.”

In Escalating Trade War, US Consumers May See Higher Prices

Big Tech or Big Labor? 2020 Democrats Line up With Unions