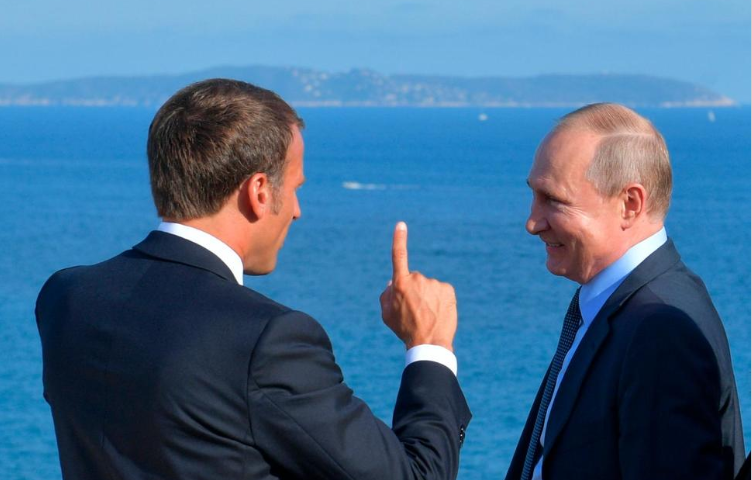 French President Emmanuel Macron hosts the G-7 summit this weekend fresh off a meeting with Russia’s Vladimir Putin, hoping to maintain his image as a global mediator at a time of deep political and economic insecurity in the world.

PARIS — French President Emmanuel Macron hosts the G-7 summit this weekend fresh off a meeting with Russia’s Vladimir Putin, hoping to maintain his image as a global mediator at a time of deep political and economic insecurity in the world and despite President Donald Trump’s open disdain for multilateral talks.

So far Macron’s had little to show for his efforts and many are skeptical about any concrete G-7 outcome amid the diverging views of Europe and the United States.

Trump and other leaders of the Group of Seven nations will meet Saturday for three days in the southwestern French resort town of Biarritz. France holds the 2019 presidency of the G-7, which besides the U.S. also includes Britain, Canada, Germany, Italy and Japan.

Macron is a strong advocate of multilateralism to resolve the world’s crisis. The task won’t be easy.

The French president appears to have given up hopes of influencing Trump, who has withdrawn the U.S. from the landmark 2015 Paris climate agreement, pulled the country out of the 2015 nuclear accord with Iran and pushed aggressive “America First” trade policies with China, Europe and others.

Making matters more difficult, France may not be able to rely on its European partners this year, with Britain focused on Brexit, Italy’s coalition government collapsing this week and key German ally, Chancellor Angela Merkel, weakened at home by dissensions in her governing coalition.

Tensions between the U.S. and Iran, the conflict in Syria and the situation in Ukraine will be at the heart of the discussions, Macron said while meeting Putin in southern France on Monday.

Russia was excluded from the G-7 after it annexed Crimea in 2014, but Macron said his talks with Putin, coming just a few days before the summit, were justified because “Russia is a key player in each of those crises.”

“If we set up meetings only when we’re able to get spectacular results every time, we wouldn’t do many international meetings in nowadays’ world,” a top diplomat at the French presidency told The Associated Press.

“France’s role is to defend its interests and take initiatives,” the diplomat added. “If the president of the republic doesn’t do it, who would?”

France desperately wants to avoid a repetition of last year’s G-7 in Canada, which was left in disarray when Trump agreed to a joint statement on trade only to withdraw from it while flying to Asia. He also lambasted the summit host, Canadian President Justin Trudeau.

Macron plans to coordinate as much as possible with other Europeans nations —he will meet British Prime Minister Boris Johnson on Thursday and Merkel on Saturday before the opening of the summit. But France also wants guest countries to play a key role in the discussions.

Four key democracies have been involved in negotiations: India, Australia, Chile and South Africa, whose leaders will attend some G-7 working sessions. Five other African countries and the African Union have also been invited to Biarritz.

Major disagreements between the U.S. and others are likely to appear on trade, climate change and global tax policy. Leaders will also discuss ways to combat inequalities in the world, fight terrorism, encourage digital development and help Africa’s Sahel region, which is threatened by extremists.

Another French diplomat said, due to American positions blocking united actions, France and the G-7 nations will be seeking input from other allies.

“If we could get India to adopt the G-7 priorities on climate, that G-7 would be useful,” the diplomat said, noting that France “coordinated with Russia, we are inviting India and we are going to China in November.”

Both French diplomats couldn’t be identified in accordance with the French presidency’s customary practices.

Many fear, however, that world leaders won’t be able to make key decisions on climate, economic injustice or other concerns.

Thousands of protesters are gathering at France’s border with Spain to take part in protests during the summit.

Cecile Duflot, the general director of Oxfam France, will be at the G-7 as a non-governmental representative but will also take part in some protests.

“We are very well aware of what is at stake and what is not … yet we still advocate for rules at the international level … which are a path of social and environmental progress,” she told the AP. “On an important topic for us, which is public development aid, the (G-7 countries) are the biggest contributors.”

No matter what commitments are included in the final statement, the G-7 summit is still useful because it helps to defuse tensions, French politician Bernard Kouchner, the foreign affairs minister from 2007 to 2010, told French radio France Bleu.

“It’s good to meet each other, it’s good to have little aside meetings between world leaders … It doesn’t mean it will lead to immediate results,” he said.

China Says It Will Sanction US Firms in Taiwan Warplane Sale

Iran Moves to Strike 4 Zeroes From Its Battered Currency