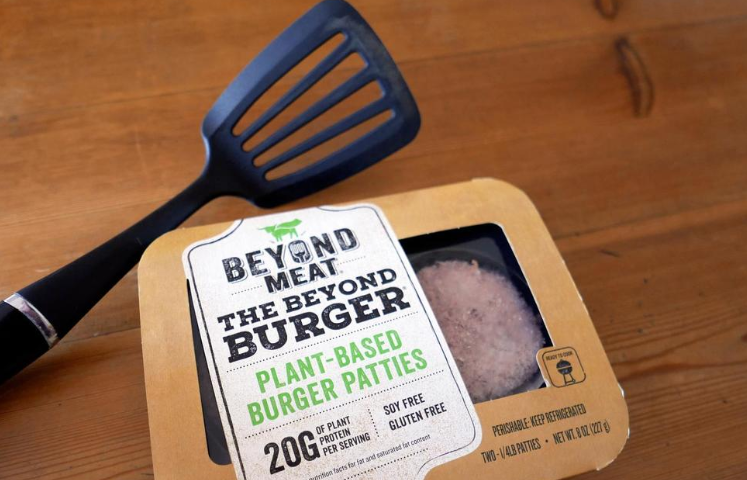 Beyond Meat is in for a bumpy ride.

The plant-based meat maker reported some good news Monday, raising its full-year revenue guidance after better-than-expected second quarter sales. But its shares slumped as it turned in a bigger loss than Wall Street forecast and announced a stock sale.

In the April-June period, Beyond Meat reported a net loss of $9.4 million, or 24 cents per share. Wall Street had forecast a per-share loss of 9 cents, according to analysts polled by FactSet. The company said it invested heavily in manufacturing and supply chain operations as well as new products and marketing.

The company also announced a secondary stock offering of 3.25 million shares Monday. Three million are being sold by shareholders — including Beyond Meat President and CEO Ethan Brown — and 250,000 are being sold by the company. Beyond Meat will use the proceeds from the shares it’s selling to increase production and marketing.

The El Segundo-based company’s shares dropped 13% to $192.49 in after-hours trading.

Ten-year-old Beyond Meat burst into the spotlight in May with its initial public offering on the Nasdaq. Its $25 opening share price has risen 700% since then. At its closing price of $222.13 Monday, Beyond Meat was worth $13.3 billion, or more than Campbell’s Soup.

Beyond Meat beat second quarter revenue forecasts with sales of $67.3 million. Analysts anticipated revenue of $52.5 million. The company said it now expects full-year revenue to exceed $240 million, up from its prior forecast of $210 million.

Brown said sales grew both domestically and in Europe and Asia. The summer grilling season, and an updated burger that hit grocery stores in June, boosted demand, Brown said.

Restaurant and food service sales jumped 483% to $33.1 million over the same period last year. Tim Hortons began selling Beyond Meat sausages at all its restaurants in Canada during the quarter, while the Del Taco chain introduced a Beyond Meat taco.

Competitors are hot on the company’s heels. Tyson Foods, one of the world’s largest meat producers, announced last month that it will begin selling nuggets made from pea protein at grocery stores this summer. A blended burger made from beef and pea protein will follow this fall. Nestle will launch a Sweet Earth-brand plant-based burger this fall. And Perdue Foods will soon sell frozen chicken nuggets mixed with cauliflower, chickpeas and plant protein.

“Competition keeps everybody sharp,” he said during a conference call with analysts Monday. “We’ve got a tremendous lead in terms of distribution, in terms of awareness.”

Brown also said different products — like blended meat-and-vegetable nuggets — will appeal to different customers. Beyond Meat’s burgers, crumbles and sausages are made from pea protein.

Dozens of Dividend Aristocrat stock have been big winners in 2019