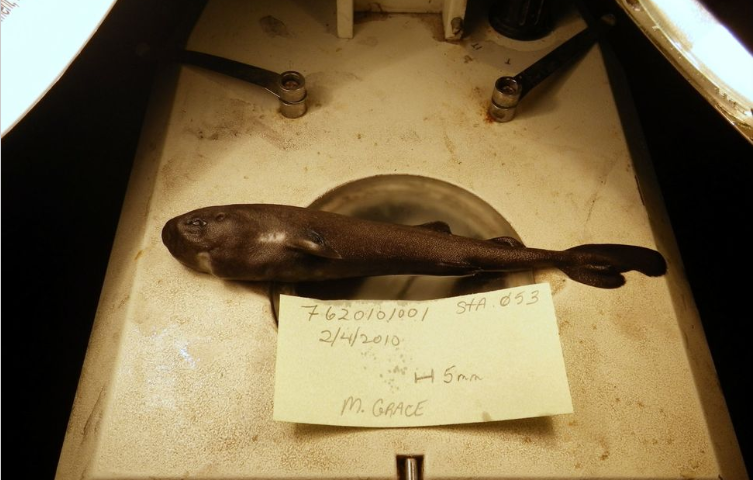 The shark was first discovered in 2010 in the eastern Gulf of Mexico.

SCIENTISTS HAVE discovered a first-of-its-kind shark species in the Gulf of Mexico that glows in the dark.

The species, called the American pocket shark, was first discovered in 2010, according to a study published last month in the journal Zootaxa. The male shark has been classified as a new species based on five features that haven’t been seen in the only other known specimen of its kind, which was captured in the eastern Pacific Ocean in 1979 and is housed in a zoological museum in Russia.

Researchers from Tulane University said that notable differences between the two sharks include fewer vertebrae and “numerous” light-producing photophores that cover most of the body. Both species have two small pockets that produce luminous fluid. Scientists say the shark’s glow helps attract prey.

The new shark was first discovered in 2010 in the eastern Gulf of Mexico during a mission to study sperm whale feeding and wasn’t seen again until 2013.

Author of the study Mark Grace of the NMFS Mississippi Laboratories of the National Oceanic and Atmospheric Administration said in a press release that the discovery is “exceeding rare.”

“In the history of fisheries science, only two pocket sharks have ever been captured or reported,” Grace said. “Both are separate species, each from separate oceans. Both are exceedingly rare.”

In order to identify the shark, researchers had to examine and photograph external features with a dissecting microscope, as well as study X-ray and CT scan images.

Henry Bart, director of the Tulane Biodiversity Research Institute, said in the release that the discovery “underscored how little we know about the Gulf.”

“The fact that only one pocket shark has ever been reported from the Gulf of Mexico, and that it is a new species, underscores how little we know about the Gulf – especially its deeper waters – and how many additional new species from these waters await discovery.”

Technology Shines on an Otherwise Sluggish Day for US Stocks