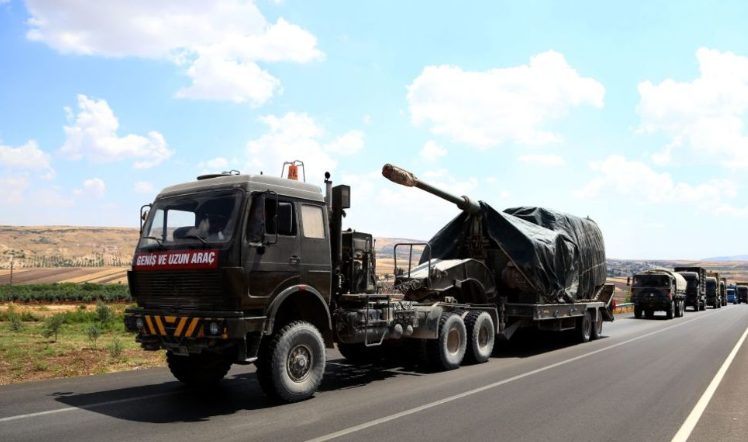 Ankara has dispatched forces to its border with Syria, analysts say, in an attempt to gain leverage as Congress pushes for sanctions over Turkey’s purchase of a Russian missile system.

Wednesday warned against new military action in an area of Syria where U.S. troops are deployed as Turkey appears to be massing for an incursion against American-allied Kurdish forces there.

“Unilateral action into northeastern Syria by any party, particularly as U.S. personnel may be present or in the vicinity, is of grave concern. We would find any such actions unacceptable,” Pentagon spokesman Navy Cmdr. Sean Robertson says.

The statement comes amid heightened tensions between the U.S. and Turkey after the NATO member began receiving Russian S-400 surface-to-air missiles last week in defiance of months of U.S. warnings that could result in new sanctions from the administration or from Congress.

Analysts fear that Turkey considers the credible threat of a military strike as its only deterrent against U.S. retaliation and that roiling tensions may overwhelm both sides’ ability to prevent conflict.

Robertson says ongoing talks between the U.S. and Turkey are the only solution to addressing issues of concern in the area. Turkey remains concerned about a stronghold established on the Syrian side of the border by Kurdish fighters integral to U.S. efforts to fight the Islamic State group on the ground but which Turkish President Recep Tayyip Erdogan considers affiliated with terrorists. The U.S. has acknowledged Turkey’s security concerns in the extremely complex Syrian warzone.

“We believe this dialogue is the only way to secure the border area in a sustainable manner, and believe that uncoordinated military operations will undermine that shared interest,” Robertson says.

U.S. concerns follow reports from multiple sources that the Turkish military has deployed a large number of troops, tanks and other resources to its border with Syria, particularly near the Syrian cities of Tal Abyad – a predominantly Arab region that analysts believe would serve as among the first steps in a Turkish attempt to break Kurdish strongholds – as well as Ras al-Ayn.

“Something is changing,” says Jennifer Cafarella, research director with the Institute for the Study of War, which tracks military movements in Syria. “The Turks are building up forces across the border from two of the key towns that Erdogan has indicated are initial objectives in Syria.”

Erdogan has multiple reasons to order the deployments now, including an attempt to demonstrate strength for a domestic audience after his party lost a recent election. This week also marks the three-year anniversary of an unsuccessful coup attempt by members of the Turkish military against Erdogan’s government.

Cafarella and other analysts believe, however, the move is an attempt by Turkey to gain leverage against the Trump administration as it faces growing calls from U.S. legislators to sanction Russia for Ankara’s decision to follow through on the S-400 sale.

“The biggest threat that they perceive is probably from Congress, and I don’t know what ability they think Trump has to ensure that Congress doesn’t go forward [with sanctions],” Cafarella says.

Turkey has previously massed forces on its southern border as a deterrent to other countries with interests in Syria. However this latest deployment appears different – and with far more perilous consequences.

“It’s an act of desperation. They don’t really have many other options, so they’re resorting to these kinds of threats that could perhaps give them leverage,” says Omar Lamrani, a senior military analyst at private geopolitical intelligence firm Stratfor, which has also tracked the Turkish movements. “But I don’t think it’s going to convince the U.S., especially Congress, to back away from imposing retaliatory measures.”

“There’s an added sense of urgency in this one. … Tensions with the U.S. could potentially push Turkey to acting on this threat,” Lamrani says.

Influential Senate leaders sent Trump a letter last week expressing their concern and urging him to comply with the 2017 Countering American Adversaries Through Sanctions Act, or CAATSA, which limits countries from making any “significant” deal with the Russian defense industry.

Trump on Tuesday announced the U.S. would no longer sell Turkey F-35 stealth jets during remarks that otherwise seemed forgiving of the country’s participation in the deal. Military and intelligence officials have for months warned against allowing the sophisticated fighter to operate within the same network as the Russian S-400s, citing concerns that would furnish Moscow with information it needs to defeat the jet, soon to become a central workhorse in many NATO and partner countries’ air forces.

A senior Pentagon official on Wednesday declined to say how Turkey may retaliate for Trump’s decision to withhold the F-35s.

“I’m not going to speculate on what actions the Turks may or may not take,” Undersecretary of Defense for Policy David Trachtenberg said in a press conference.

Members of Congress speaking after Trump’s decision showed no signs of wavering on punishing Turkey.

“There’s wide latitude about what to do about the sanctions, but the sanctions certainly need to be put in place,” Sen. James Lankford, an Oklahoma Republican, told Defense News.

The State Department and the Turkish Embassy in Washington, D.C., did not immediately respond to requests for comment. The U.S. headquarters overseeing operations in Syria deferred questions to the Pentagon.

Roughly 2,000 U.S. forces remained in Syria fighting alongside other NATO and local partners when Trump declared victory against the Islamic State group’s so-called caliphate in Syria last year. He initially said in December the U.S. would withdraw fully – prompting the resignation of Defense Secretary Jim Mattis – but since backed away from that assertion, saying the U.S. presence would reduce to roughly 400. France and the U.K. pledged earlier this month to bolster their military presence in Syria to help ensure the lasting defeat of the terrorist network.

Ambassador James Jeffrey, Trump’s envoy to the war against the Islamic State group, has led negotiations with Turkey in recent months in an attempt to ease tensions between the two powers. Little is known about how much progress he has made. Jeffrey was scheduled to speak before the Aspen Security Forum on Wednesday.

Even if Turkey and the U.S. maintain open and clear channels of communication, their ability to mediate a solution remains in doubt.

“We are getting to a point where it’s not just about being able to talk to one another, it’s also about reaching a middle ground,” Stratfor’s Lamrani says. “That middle ground becomes increasingly difficult to see.”