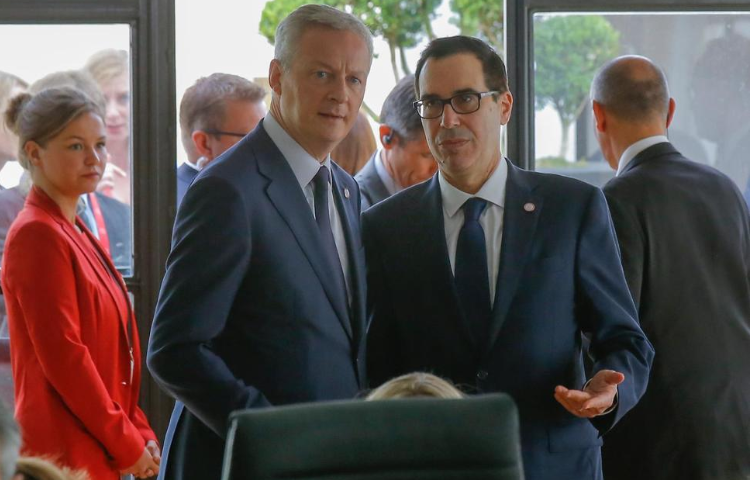 Finance ministers from the Group of Seven rich democracies are sounding the alarm on the dangers of cryptocurrencies and pouring cold water on Facebook’s Libra as they wrap up a meeting in Chantilly, France.

Finance ministers from the Group of Seven rich democracies are sounding the alarm on the dangers of cryptocurrencies and pouring cold water on Facebook’s Libra as they wrap up a two-day meeting in Chantilly, France.

Officials from the U.S., France and others have sounded skeptical so far about Libra and cryptocurrencies, which have the potential to make the financial system more efficient but also carry risks.

Facebook has proposed creating Libra as a cryptocurrency that is pegged to existing currencies to make it more stable than the likes of Bitcoin and would have the backing of numerous major companies. Governments around the world are rushing to assess how that would affect the economy.

Le Maire said that the G-7 officials noted that while stable cryptocurrencies like Libra could reduce costs for transfers and help provide financial services to underserved communities, they also pose concerns and would need to be accountable to governments, not just corporations. Libra could, for example, facilitate money laundering and terrorist financing and influence the value of established currencies.

While the G-7 countries, a group of longtime allies, seemed to agree on the risks of cryptocurrencies, their meeting is also exposing differences on views on how to tax digital businesses.

The U.S. and France in particular are at odds after Paris said it planned to put a 3% tax on tech giants like Facebook and Google.

U.S. Treasury Secretary Steven Mnuchin has objected to the plan when meeting with his French counterpart, host Bruno Le Maire.

France says that if an international agreement on such a tax is made, it will withdraw the tech tax plan. The proposal was approved by the French parliament last week and provoked a strong rebuke from the White House.

The rift risks feeding into broader disagreements, including on trade, after the U.S. imposed tariffs on some EU goods last year, drawing retaliation from Europe.

The G-7 finance meeting will set the stage for a summit of the countries’ heads of state and government in August. Beyond the U.S. and France, the G-7 includes Germany, Britain, Italy, Japan, Canada and representatives from the European Union.