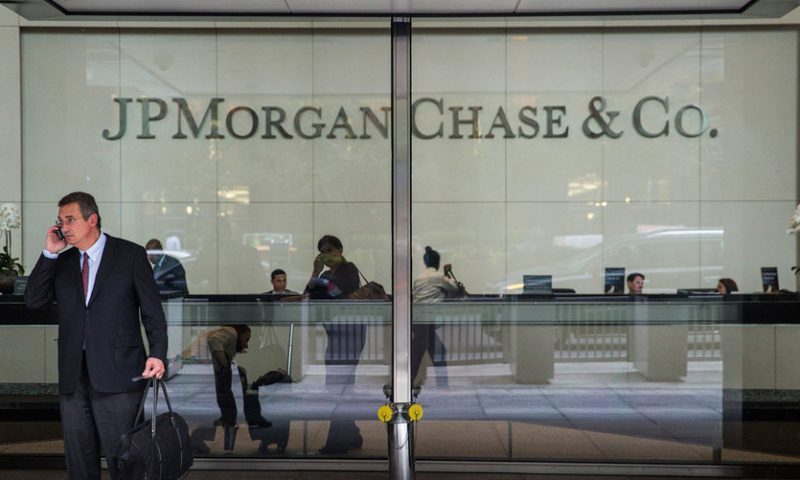 Trump described progress toward a China and U.S. trade pact as “a long way to go”

U.S. stocks closed lower on Tuesday after President Donald Trump said an agreement with China on trade tariffs had “a long way to go,” in a briefing with reporters. The fade came a day after major equity indexes eked out a round of all-time closing highs and as Wall Street digested a fresh, bank-heavy round of earnings reports.

President Donald Trump described progress toward a China and U.S. tariff pact as “a long way to go” to reporters. Trump made his comments during a cabinet meeting at the White House, with reporters in attendance.

“The bullish move that some equity markets enjoyed thanks to the slight improvement in U.S.-China trade talks, and the chatter about the Federal Reserve lowering rates, has run out of steam, and some traders are taking a breather,” David Madden, market analyst at CMC Markets UK, in a daily research note.

The Fed has hinted strongly that it is likely to cut interest rates as it attempts to dull the effect of trade conflicts and expectations that the economy may weaken somewhat in the 11th year of a history-setting economic expansion.

Federal Reserve chair Jerome Powell, while speaking in Paris at the Bank of France, said the economic outlook hasn’t improved since the last Federal Open Markets Committee meeting in June, likely setting the stage for an interest rate cut.

Dallas Federal Reserve chief Robert Kaplan also said Tuesday that inflation is likely to remain low because of the vast changes new technologies have had on wages and prices.

While all four banks were able to surpass much lowered expectations for second-quarter performance, “the broad theme we’re seeing is slowing loan growth, somewhat muted trading revenues and shrinking margins,” said Stephen Biggar, director of financial institution research at Argus Research in an interview. “Lower manufacturing activity, lower housing activity and business-investment slowing are all manifesting themselves” in bank performance, he said.

JPMorgan’s performance in particular, however, does reflect the continued strength of the U.S. consumer, given that provisions for losses on consumer loans relative to income remained steady.

Also reflecting a healthy U.S. consumer were data on June retail sales, which rose 0.4% compared to May, above the 0.1% gain expected by economists polled by MarketWatch.

“The banks generally are a really good sign of the economy,” said Diane Jaffee, a senior portfolio manager at TCW, in an interview, adding that both Citi and JPMorgan reported positive earnings growth from their bank-branded consumer credit card units for the second quarter.

“The consumer has been quite strong,” Jaffe said.

That’s in contrast to the U.S. factory sector, which showed unchanged growth in the three months ended in June, the second straight quarterly decline and below the 0.1% gain expected by economists, per a MarketWatch poll, the Federal Reserve said Tuesday.

Dow-component JPMorgan’s stock rose 1.8% Tuesday, after the bank reported earnings and revenue for the second quarter that beat analyst estimates.

Shares of Goldman Sachs, also in the Dow, rose 1.9% after the bank reported second-quarter earnings and revenue that beat Wall Street expectations, while raising its dividend by 47%.

Shares of Wells Fargo fell 3.0%, even after the bank reported second-quarter earnings and revenue that surpassed analyst forecasts.

Dow-component Johnson & Johnson JNJ, -1.64%  was in focus after the health-care retailer produced quarterly results that were better than expected while boosting its full-year outlook, though it reported falling revenue compared with the second-quarter of last year. Shares of J&J were down 1.6%.

Facebook Inc. FB, -0.03%  were in focus after executives from the social-media giant were treated to a blistering reception while explain its digital currency venture Libra coin to a Senate banking committee on Tuesday. Facebook’s stock was unchanged.

Blue Apron Holdings Inc. APRN, +35.51%   rose 35.6% after the meal-kit company announced seasonal recipes that will include plant-based proteins from Beyond Meat Inc. BYND, +3.64%

The yield on the 10-year Treasury note TMUBMUSD10Y, -0.13% touched a four-week high of to 2.12%, after strong consumer data potentially trimmed the prospects for aggressive rate cuts this year.

Is the Fed on the verge of sparking a stock-market ‘melt-up’?