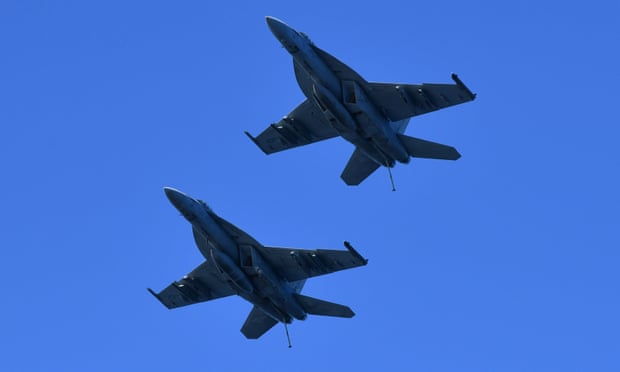 Australia’s defence department gave tens of thousands of dollars of work to a US firm blacklisted for corruption and bribery.

Defence last year contracted US firm Lock N Climb to provide it with $25,000 of specialist ladders used for aircraft maintenance. The work was awarded through a limited tender process, meaning other firms were restricted from competing for the contract.

Guardian Australia can reveal that the company was – and still is – blacklisted by the US and barred from working with American government agencies.

An undercover officer caught the company’s president paying cash bribes to officials at an Oklahoma airforce base, US court documents show. The bribes were paid to secure deals to supply the base with Lock N Climb’s equipment.

Australia not only gave Lock N Climb the contract when it was blacklisted by its most important ally, it did so at a time when the firm’s president was still serving a court-imposed probation for a bribery offence.

The revelations have prompted integrity campaigners to accuse Australia of undermining overseas efforts to deter corruption.

Australia supposedly maintains a “zero-tolerance” approach to bribery and is a signatory to the OECD anti-bribery convention.

It is the second time in a year that Australia’s business dealings with firms alleged to have engaged in corrupt practices have been exposed. Last year, Guardian Australia revealed the Department of Foreign Affairs and Trade gave hundreds of millions of dollars in foreign aid contracts to Sinclair Knight Merz, a firm the World Bank had found to have systematically bribed officials across south-east Asia.

Transparency International said Australia’s handling of the Lock N Climb contract “undermines the efforts of the US to tackle corruption and promote clean contracting”. Transparency International’s chief executive, Serena Lillywhite, called on the government to do more to ensure rigorous due diligence of the integrity, character and track records of contractors.

“There is no sensible reason for awarding a contract to a company that is currently blacklisted in the US for corruption,” Lillywhite said. “It begs the question: is the Australian government serious about combating bribery and corruption?”

US court documents show Lock N Climb’s president, Jeffrey A Green, bribed a US air force official to secure deals at the Tinker air force base in Oklahoma. The bribery was minor and not systemic.

Green offered small amounts of cash to an individual to ensure his ladders were used at the base in 2013 or 2014. He was caught doing the same thing in an undercover sting in 2016.

Green was prosecuted through the US district court, where he pleaded guilty, and was sentenced to weekend detention and fined $22,291. He remains on a 36-month probation.

His lawyers argued Green had been naive. He had used a tactic he employed in the private sphere – paying commissions for introductions to potential business opportunities – without realising it would be illegal when dealing with the US government.

The air force official he had initially paid the bribe to in 2013 or 2014 said: “It did not seem like Green knew that his offer was tantamount to a bribe.”

“[The official] believed it was likely that Green did not understand that making such an offer was illegal,” court documents said. “[He] added that Lock N Climb’s products are so good, Green had no reason to offer a bribe.”

Court documents also suggested the US air force was keen to secure Lock N Climb’s ladders anyway, and would have done so without the bribes. A long series of character references also attested to Green’s good character, and spoke of a recent family trauma that had impacted him greatly.

Both Lock N Climb and the defence department were approached for comment but did not respond by deadline.