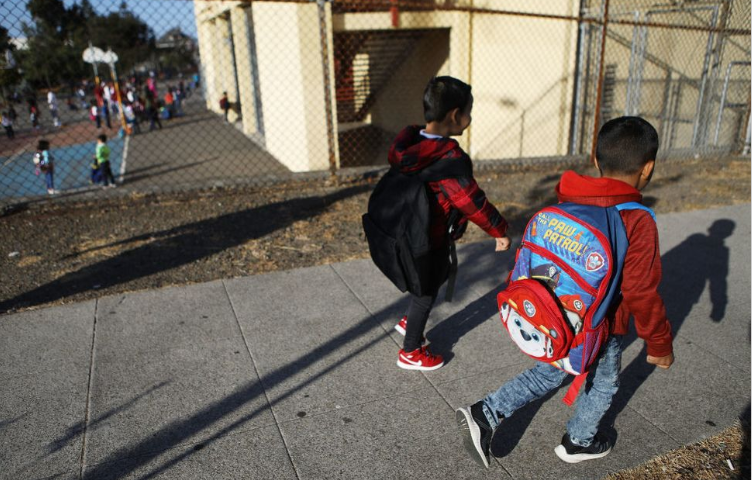 When local police partnered with Immigration and Customs Enforcement to enforce immigration laws, the number of Hispanic students plummeted, a study finds.

MORE THAN 300,000 Hispanic students have been displaced from K-12 schools in communities where local police have forged partnerships with Immigration and Customs Enforcement officers to better enforce immigration laws, according to a new study from researchers at Stanford University.

The researchers used data acquired from the Department of Homeland Security through Freedom of Information Act requests to identify 55 counties where ICE partnered with local law enforcement agencies to identify, arrest and remove undocumented residents. Between 2000 and 2011, those policies resulted in the displacement of about 320,000 Hispanic students, most of whom were elementary school age and likely born in the U.S.

In communities where such partnerships existed, the number of Hispanic students dropped by 10% after just two years.

“I was really surprised by the magnitude of this effect,” Thomas Dee, a professor at Stanford University and lead author of the study, says. “To see such clear evidence of impact was really quite striking to me. If you look in the years prior to the adoption of these ICE partnerships, there is no change in Hispanic and non-Hispanic enrollment, and then you see this drop-off.”

The partnerships, the researchers said, worked in two main ways – by encouraging families to leave and discouraging other families from moving there. In contrast, ICE partnerships did not affect non-Hispanic enrollment.

The researchers also underscored that the evidence is based on data from a period when federal support for ICE partnerships with local police was more limited than in recent years. The increased number of partnerships likely has resulted in more severe displacement, they said.

“It’s important to note that our findings are based on data from 2000 to 2011 when these ICE partnerships received measured support from the Bush and Obama administrations,” Mark Murphy, co-author of the report and a doctoral student at Stanford, says. “The number of ICE partnerships has increased dramatically during the Trump administration.”

During the years studied, 55 communities had adopted such partnerships. As it stands today, ICE currently has 90 active partnerships with local law enforcement agencies.

Dee said he was particularly concerned about the magnitude of their findings given previous research that documents the harm caused to students when their families are forced to move under duress.

“So the scale of that impact, given what we know about the developmental harm to children of reactive moves, is quite stunning to me.”

The report comes as Ken Cuccinelli, the acting director of U.S. Citizenship and Immigration Services, said immigration authorities are prepared to carry out deportations of about 1 million people.

Iowa, Nevada to Launch Caucus Voting by Phone for 2020