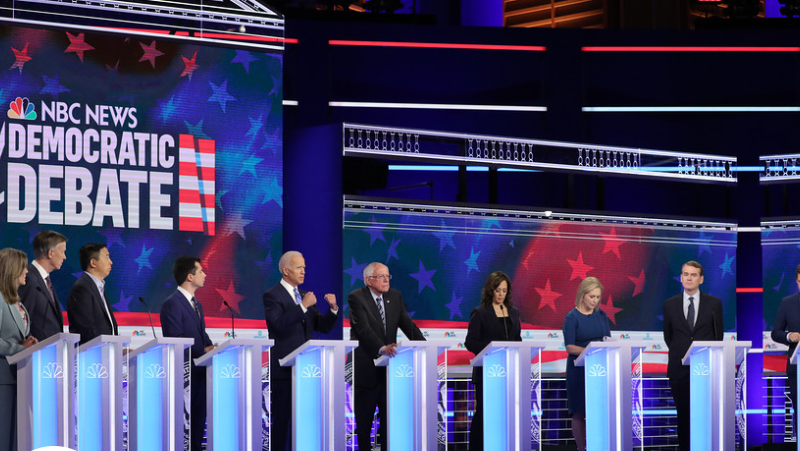 It turns out that Kamala Harris is no big fan of federally mandated “busing” to integrate schools. The California senator pointedly refused to back the policy under questioning last week.

Yes, the same person who slammed Joe Biden during the previous week’s Democratic presidential debate — or “debate” — for not supporting it, either.

I’m sure the candidates will now thrash out alleged “nuances” between their positions, but the drive-by hit at the debate wasn’t about nuance. Harris implied there was a gulf between her and Biden. And the sound-bite format let her get away with it without any real Biden comeback.

Could anything illustrate better just how these so-called debates are turning our presidential elections into an absolute farce?

They’re not debates. They’re “America Lacks Talent” — an unreality show. They’re about people swapping canned sound bites and hoping one of them goes viral on YouTube.

They don’t help select the best nominee. They insult the voters, they weaken our democracy, and they may end up costing the Democrats the 2020 presidential election.

This is the very process that helped Donald Trump emerge from a crowded field as the Republican nominee in 2016. Really, Democrats? This is your plan?

Here’s a radical, but simple, idea. Scrap all these phony group debates and replace them with something straightforward: a series of real debates, one on one.

One hour. Two candidates. One winner.

The Democrats have too many candidates to fit into a single night. Over two nights, they still have too many people on stage for anyone to say anything. So make the candidates go toe-to-toe and truly test each other.

I want to see Harris and Biden hammer each other for half an hour apiece.

I want to see Bernie Sanders and Elizabeth Warren fight it out directly for the liberal wing of the party.

I want to see Mayor Pete debate pretty much anybody.

And I want to see people actually be required to back up their attacks — and their proposals.

I want real answers. I don’t want a show of hands. What is this, fourth grade?

Yes, let the lesser-known candidates have some real airtime. If you didn’t know much about Tulsi Gabbard or Andrew Yang, or even Bill de Blasio, before the first set of debates, you probably weren’t much better informed afterward. If they have something serious to offer the voters, give them a real chance to explain it.

Even with this change, you could still weed out the field in the same way, with candidates dropping out as their poll numbers vanish, or the money dries up or they lose primaries.

In a perfect world, the questions wouldn’t just be asked by television journalists, either. The candidates would throw them at each other.

What could be better? Real debating. This isn’t a variety show. This is a job interview — for the most important job in the world.

The Republicans fielded a broad array of candidates in 2016. Some had serious credentials for the job. And in all the noise they canceled each other out. The nomination went instead to a deadbeat with emotional issues.

It’s tempting to say, “Well, it worked for Trump so why not the Democrats?” But it only worked for Trump because of historical accidents — like James Comey, Vladimir Putin and the many egregious errors of Hillary Clinton’s campaign. Against a better campaign he’d have been crushed. You’d be crazy to look at the Republican nomination process of 2016 and conclude, “Yes, that’s how we should do it.” (And let’s not forget Trump lost the popular vote by 3 million.)

Never has a party had an easier shot at elevating the level of American political debate. Never has it been easier to run and win simply as the grown-up in the room. Even people who are likely to vote for Trump are turned off by his antics.

Instead the Democrats announced that Williamson will be back for the next round of 10-person “debates.”

The famous Lincoln-Douglas debates lasted hours each time, with rebuttals and counter-rebuttals. Today’s “debates” give candidates an average of about eight minutes apiece. In the first of last month’s two debates, most actually got less airtime than one of the moderators.