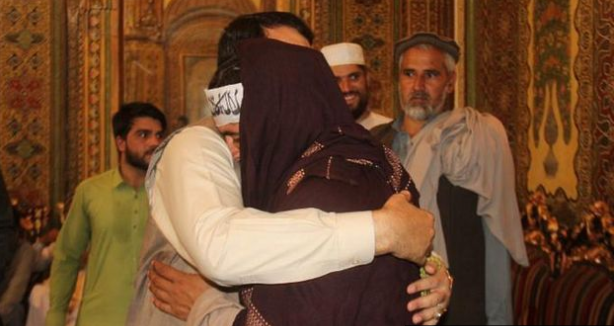 A year ago, during an unprecedented ceasefire, Afghan forces and the Taliban put down their weapons to celebrate the Muslim festival of Eid. As talks over the country’s future continue, do those who came together feel any closer to a lasting peace?

For three days in June 2018, men long dedicated to killing each other hugged and posed together for selfies.

Those scenes helped kick-start a peace process that has made significant progress.

Hayatullah Hayat, then governor of Nangarhar province, was among those who met the insurgents.

He led a joint procession of government and Taliban members through the eastern city of Jalalabad – the red, green and black national flag, along with the white banner of the insurgents, fluttering above them.

“I hosted 230 Taliban, and none of them were searched when they entered my palace,” he tells me proudly.

Mr Hayat has survived a number of ambushes by the Taliban, and says he has lost more than 50 close colleagues to the conflict in the past few years.

He admits that he was initially concerned about the possibility his guests might attack him.

“Personally, I was worried,” he says, but adds he took the risk to emphasise the importance of peace for the Afghan people, “even if I died”.

More than 45,000 members of the security forces have been killed in the conflict in the past five years. But in a large conference hall Mr Hayat and his team met dozens of Taliban fighters, who lined up to embrace him.

Among them was a young fighter who asks to be known only as “Khanjar” to protect him from possible arrest.

He tells a colleague he has fond memories of the day. “We exchanged Eid greetings with happy hearts… I hugged the governor and wished him well.”

The only place the two would normally have met, Khanjar notes, was “on the battlefield”.

Nonetheless, he is in no doubt what he would do if he were to see the governor today: “If our leaders give us permission to do so, I will greet him. But if they tell us to fight, I will fight.”

Shortly after the ceasefire, peace negotiations between the Taliban and the United States began in Qatar, where the group has a political office. Until now, the insurgents have refused to meet representatives of the Afghan government, who they dismiss as puppets.

But on Sunday, an “intra-Afghan” discussion will be held, again in Qatar, which will be attended by the Taliban and a number of Afghan political figures. Significantly, some members of the government are also expected to take part – but they will be there in a “personal capacity.”

Mr Hayat says when he met Taliban members last year during the ceasefire, he asked them how they could justify their violence.

And how did they respond to the argument?

“They said [they] cannot take any decisions and this has to be consulted with [their] leadership.” But, he says, they added that they would fight until foreign troops left the country.