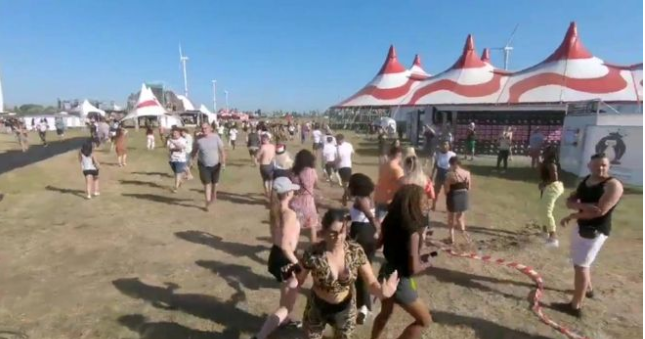 British festival-goers have said they are “devastated” after arriving at a music festival in Belgium to find out it had been cancelled.

VestiVille was due to take place in Lommel this weekend, but the mayor of the city told the BBC he shut it down because of safety issues.

One woman, who said she spent hundreds of pounds on the trip, said: “We got there and no-one was being let in.”

Another attendee compared it to 2017’s disastrous Fyre Festival.

Organisers of hip-hop festival VestiVille – which describes itself as “the gateway to an urban oasis of music” – said the decision was taken after discussions about the safety of the public and performer A$AP Rocky.

They added they are consulting with their partners about refunds.

Sammy, 24, from south London, said she and three friends paid more than £200 each for tickets, travelled over 10 hours to get there via ferry and spent nearly a £1,000 for accommodation.

“We got there about half an hour late and no one was being let in,” she said. “We were all stood at the entrance wondering what was happening.

“Everyone was shouting, ‘What the hell’s going on!'”

Footage and photos from the scene show crowds waiting in confusion.

Sammy, who didn’t want her second name used, said “it all went wrong” when she saw A$AP Rocky – one of the festival headliners – had posted a tweet cancelling his set moments before the festival was due to kick off.

Rapper A$AP Rocky, who was included in the star-studded line-up, along with Cardi B, Migos, Ja Rule and Ashanti, tweeted: “VestiVille!!!: I won’t be performing today due to security and infrastructure concerns which relate to the production of the show.

“The promoters told me it would be handled but unfortunately for you and me they didn’t.”

Sammy said she found out about the event on Instagram and was looking forward to attending her “first ever festival” but the excitement soon turned into panic when she saw an angry crowd of people waiting at the entrance.

“There were only about 10 to 15 security guards there. Then we were told the mayor had decided to cancel the event.

“It was mad. People started flipping tables and barging past.”

On Friday, VestiVille told ticketholders on social media that it had been cancelled.

“Today at 5:00 PM the mayor of Lommel decided to not let VestiVille start,” a statement from organisers read. “After consultation with the security services and A$AP Rocky’s security officer, it was decided that the safety of the artist and the public could not be guaranteed.

‘Didn’t want festival deaths’
Bob Nijs, mayor of Lommel, told the BBC he had been in talks with the festival organisers since January.

He said a few days before the event, he raised concerns, but was told it would be ready.

“In the evening when we came back we saw they had worked hard, but there were still problems. There were no emergency exits, the stages were not safe and they only had about 30 security guards.

“It was a difficult decision to make, but I didn’t want to be the mayor to say, ‘Sorry your son or your daughter died at this festival.'”

When Sammy and her friends managed to make their way onto the festival, she said it was a sorry sight.

“Inside? There was nothing. There were lots of little kiosks, but no staff. And potholes. The ground had so many potholes,” she said.

Melissa, 23 from south London said she was “so disappointed”.

“I have been planning this since February and saving all of my money to to pay for it. I thought it was going to be like Coachella.”

But the student said it was more like the infamous Fyre festival, which became the subject of two Netflix documentaries.

Fyre was billed as a glamorous party on a deserted island but when people arrived the site was still unfinished.

“I really don’t have that much money to be wasting on festivals that don’t even happen,” she said.

“We bought tickets for the whole weekend. You can imagine how expensive that is.”

Despite the disappointment, Sammy and Mellissa said they made the best out of a bad situation.

“To be honest I had so much fun. I met so many people too! We ended up jumping on the stage having our own festival,” Sammy said.

In their statement, VestiVille added: “Production and suppliers have given everything to make VestiVille possible. The campsite will remain open for the time being and an organized festival exit will be organized in consultation with the municipality.

“The organisation will now consult with their official partners about a refund.”

Greece sees its future as the Florida of Europe