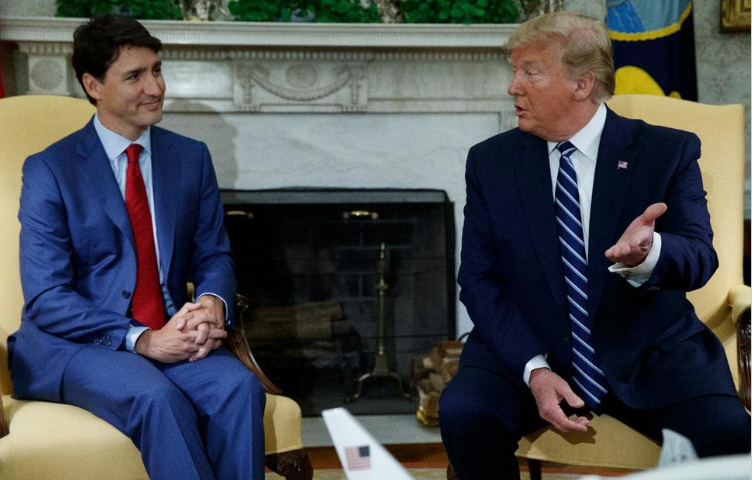 President Donald Trump and Canadian Prime Minister Justin Trudeau sought to demonstrate a united front Thursday in the uphill effort to get a replacement for the North American Free Trade Agreement over the finish line.

WASHINGTON — President Donald Trump and Canadian Prime Minister Justin Trudeau sought to demonstrate a united front Thursday in the uphill effort to get a replacement for the North American Free Trade Agreement over the finish line.

At Trump’s insistence, the U.S., Canada and Mexico agreed to an update of the 25-year-old agreement. But the agreement faces opposition from many House Democratic lawmakers and labor unions.

“I hope politically they can do what they have to do,” Trump said of Democratic lawmakers. “Now, the day after the election it would win with tremendous support, but we have an election coming up.”

In the end, it comes down to whether House Speaker Nancy Pelosi, D-Calif., will bring to a vote a bill that would implement changes necessary to enact the United States-Mexico-Canada Agreement. She insists that changes are needed to generate Democratic support, and has appointed a working group to meet with United States Trade Representative Robert Lighthizer on finding ways to ease Democratic lawmakers’ concerns.

“My hope is that over the course of the next couple of weeks we can make substantial progress,” Lighthizer told a Senate panel Tuesday.

“I think Nancy Pelosi is going to do the right thing,” Trump predicted as he met with Trudeau in the Oval Office. He went on to describe the deal as “great for the farmers, manufacturers. It’s really great for everybody.”

Trudeau told reporters he had a “frank conversation about the path forward” Thursday with Pelosi but said he would not get involved in the U.S. ratification process.

However, Trudeau rejected the idea of reopening the deal in order to make changes.

“We are concerned that any reopening of (the trade pact) could lead to not just lengthy, further negotiations, but also may lead to worse outcomes for Canadians and for Canada,” he said during a press conference held at the Canadian embassy Thursday afternoon.

Mexico this week became the first of the three nations to ratify the agreement.

The White House recently moved to ease passage of the agreement by lifting tariffs on imported steel and aluminum from Canada and Mexico.

The White House also took steps that would allow the administration to submit legislation necessary to implement the trade deal in time for lawmakers to vote before the August recess, if they so choose.

Labor unions, a key Democratic constituency, are seeking assurances that Mexico will enforce enhanced labor standards for workers there because that would reduce the incentive for U.S. companies to move their plants and jobs south of the border. The new deal requires Mexico to encourage independent unions that will bargain for higher wages and better working conditions.

“If the president insists on a premature vote, we’ll have no choice but to oppose it,” AFL-CIO President Richard Trumka said this week at a union event in Pittsburgh.

Democrats are also voicing concerns over language that would give pharmaceutical companies 10 years’ protection from cheaper competition in a category of ultra-expensive drugs called biologics, which are made from living cells. The need to curb high drug prices has become a rallying cry for voters of all political stripes.

Trudeau also brought up the plight of two Canadians held in China. Beijing detained ex-diplomat Michael Kovrig and entrepreneur Michael Spavor on Dec. 10 in an apparent attempt to pressure Canada to release Meng Wanzhou, a top executive at Chinese tech giant Huawei. She was arrested Dec. 1 at the request of U.S. authorities who want her to face fraud charges in the U.S.

Trump is expected to meet with Chinese President Xi Jinping at the G-20 summit this month in Japan. The president said he would bring up Canada’s concerns if Trudeau requested.

“Anything I can do to help Canada I will be doing,” Trump said.

After the meeting, Trudeau said he and Trump had an extended conversation about how China has detained two Canadians in retaliation for the arrest of the Huawei executive.

“I spoke at length with the president about the wrongful detention of two Canadian citizens in China and continue to call for their immediate release,” Trudeau said.

Trump and Trudeau have had a rocky relationship but tensions have eased since a low point last summer when the U.S. president called Trudeau “weak” and “dishonest.” Trump was furious after Trudeau said at a Group of Seven summit that he wouldn’t let Canada be pushed around in trade relations with the U.S.

Trudeau said that he and Trump have been able to maintain their focus on the “things that matter in this relationship.”

Putin Open for Talks With Trump, Warns Against Force on Iran