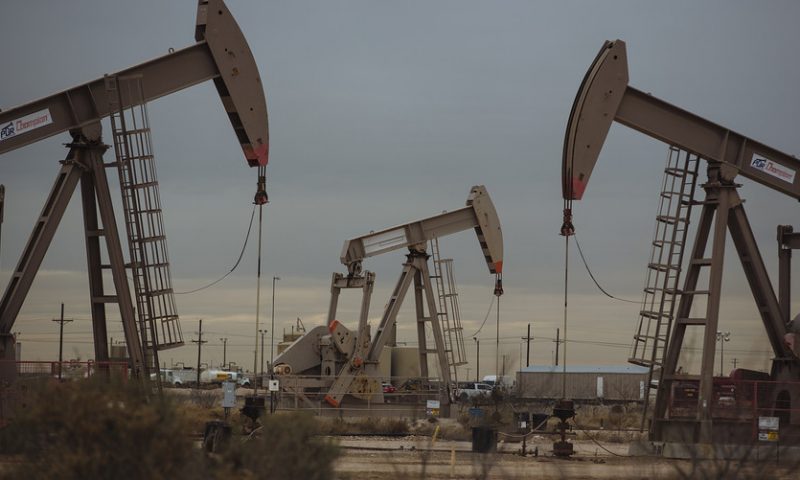 Oil prices on Wednesday logged the lowest finish since January as U.S. crude supplies climbed a second week in a row and concerns about energy demand persisted on the back of growing U.S.-China trade tensions.

“The dominant trend remains bearish as U.S. oil supply is up more than 10% this year, and climbing, while the trade war is still a significant headwind for oil as demand expectations are negatively affected,” Tyler Richey, co-editor of Sevens Report Research, told MarketWatch.

The Energy Information Administration on Wednesday reported that U.S. crude supplies climbed by 2.2 million barrels for the week ended June 7. That marked a second weekly gain in a row.

“We are seeing a trend develop where consistent builds are taking place when draws are expected,” said Tariq Zahir, managing member at Tyche Capital Advisors, adding that supply declines would be “typical” for this time of year.

“The bigger surprise was the dramatic increase in inventory levels” at the U.S. oil trading hub of Cushing, Okla., he said. “The amount of inventories that have been added to Cushing in the recent weeks are quite atypical.” The EIA reported an increase of just over 2 million barrels at Cushing for last week.

“Just the thought of overproduction in this deteriorating global economic environment suggests, unless OPEC and allies can bridge the agreement gap, markets will head south in a hurry,” said Stephen Innes, managing partner, Vanguard Markets Pte, in a note to clients before the EIA data.

In its Short-term Energy Outlook report released Tuesday, the EIA reduced its forecasts for this year’s oil prices and for U.S. crude-oil production in 2019 and 2020. The EIA forecasts 2019 domestic crude production of 12.32 million barrels a day, down 1% from the May forecast.

Monthly oil reports from the Organization of the Petroleum Exporting Countries and the International Energy Agency will be released on Thursday and Friday, respectively. The IEA’s report will include forecasts for 2020.

Trade tensions continue to be a major concern, linked to a potential slowdown in energy demand growth. President Donald Trump said Wednesday he’s got “a feeling” the U.S. and China will reach a trade deal, but held out the possibility of more tariffs on Chinese goods without one.

The market also awaits a decision by OPEC and its allies on whether to extend their production-cut deal past the end of this month, when it expires.

“Fundamental uncertainty on the current and forward states of the global oil market is high, driven by both an uncertain macro outlook and volatile Iran/Venezuela/Libya production,” analysts at Goldman Sachs wrote in a research note dated Wednesday. “Combined with the debatable path of U.S. production, this uncertainty is large enough to swing the global oil market between a surplus and a deficit on a monthly basis, just as OPEC+ prepares for its upcoming meeting.”

“We believe that this will lead the group to roll forward its current agreement, with likely no change to country level quotas,” they said.

Goldman Sachs analysts point out that the “timing of this meeting itself remains uncertain with Russia pushing for a July 3-4 timeline, but OPEC initially planning for June 25-26, as reported by Bloomberg.”

In other energy trading, natural gas for July delivery NGN19, -0.71% slipped 0.5% to $2.386 per million British thermal units. The EIA on Thursday is likely to report a weekly climb of 108 billion cubic feet, topping the five-year average rise of 92 billion, according to a survey of analysts by S&P Global Platts.

Euro Gains in Global Use, but Dollar Still Dominates