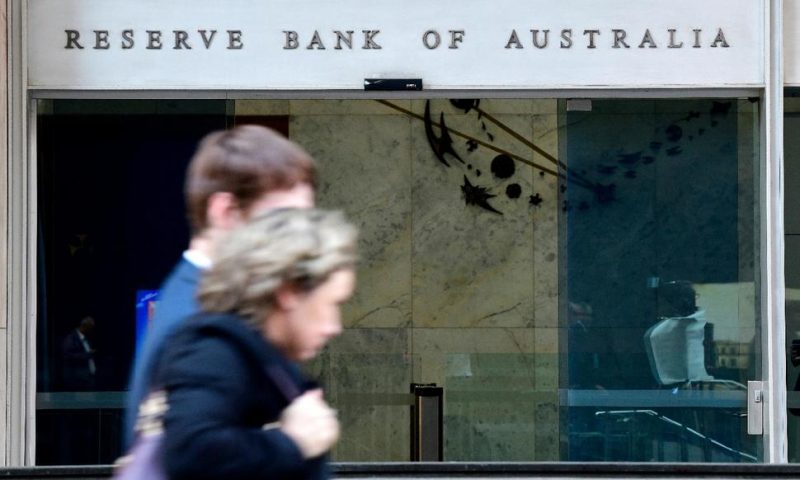 MELBOURNE, Australia — Australia’s central back on cut its benchmark interest rate Tuesday by a quarter of a percentage point to a new record low of 1.25% in the first rate change in almost three years.

The change was widely expected after Reserve Bank of Australia Governor Philip Lowe said two weeks ago that inflation was likely to remain below the bank’s target range of 2% to 3% a year and that a decrease in the cash rate would likely be appropriate.

The bank’s board moves interest rates at monthly meetings to keep inflation within the target range. Inflation is currently running at 1.3%. Lower rates are a boon for borrowers and can help stimulate more business activity.

“The board took this decision to support employment growth and provide greater confidence that inflation will be consistent with the medium-term target,” the bank said in a statement.

It said the outlook for the global economy “remains reasonable,” but risks stemming from trade disputes are growing.

“Growth in international trade remains weak and the increased uncertainty is affecting investment intentions in a number of countries, it said.

Treasurer Josh Frydenberg met with chief executives of Australia’s major banks in recent days to urge them to pass on the full value of any rate cut to borrowers.

“I expect all banks to pass on the benefits of sustained reductions in funding costs,” Frydeneberg told The Sydney Morning Herald newspaper.

The reduction is expected to boost Australia’s flagging housing market, increase exports by reducing the value of the Australian currency and create jobs.

Lowe said in a speech two weeks ago that Australia had to “do better” than the current jobless rate of 5.2%, which had increased from 4.9%.

The Australian economy is suffering from the end of a mining boom, largely to supply China, that carried the country through the global economic crisis without a recession. The country has not suffered a recession — defined as two consecutive quarters of economic contraction — since the June quarter of 1991.

Dow Jumps Over 500 Points Amid Hopes of Fed Rate Cut