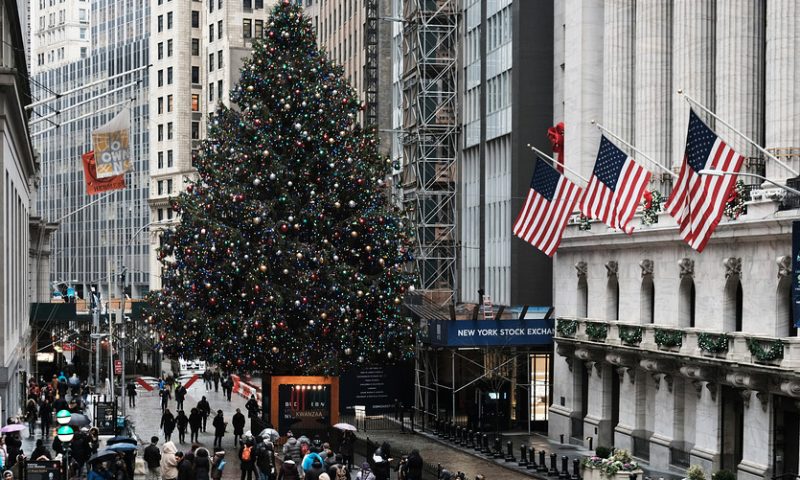 Run for the hills.

That seems to be summing up the investor mood Friday after President Donald Trump shocked markets with a tweet promising tariffs on all Mexican imports until the illegal migrant situation is sorted. The likelihood of one more trade battlefield opening up means pretty much any asset associated with risk, notably equities, is taking a hit.

And while thoughts of scant avocado or tequila supplies may be on your mind, don’t forget that Mexico tariffs can impact big car makers, which have moved some production there — shares of Ford F, -2.26%  and GM GM, -4.25% are under pressure. Meanwhile, some are worried Europe may be next in line for tariffs, and those markets are also down sharply.

Elsewhere are reports Beijing may be readying its own retaliatory measures against a U.S. crackdown on tech giant Huawei Technologies. And China manufacturing data had a poor showing for May, thanks to U.S. trade tensions.

To be sure, May is drawing to a close with a clang for investors. The S&P 500 is facing a more than 5% loss for the month, which brings us to our chart of the day, from Joel Kruger, currency strategist at LMAX Exchange. His chart spells out the possibility that stocks will revisit levels not seen since the December meltdown.

Kruger is specifically is looking at the 2,340 reached in December 24 which was the lowest level seen for the S&P 500 in the last two years — and revisiting that level would mean a 16% drop from Thursday’s close. That’s drop is more or less what Scott Minerd, chief investment officer and one of the world’s premier bond-fund managers of Guggenheim Partners, is predicting as well.

Kruger says investors need to face up to the fact that by now, any benefits from already depleted easy central bank and government stimulus could be offset by new negative shocks to the global economy, Kruger told MarketWatch in emailed comments.

He says the S&P 500 is facing what he calls an “ugly reversal month,” meaning that May started with a push to a fresh record high, but has ended with the S&P 500 coming all the way back down and breaking past a low seen in April. ”It’s an ugly picture when you go higher and then can’t do anything with it,” and then take out the previous monthly low, he says.

“This reversal introduces the prospect for a deeper drop over the coming weeks, easily capable of retesting the December 2018 low,” he says.”

“Overall, we remain skeptical the equity market will be able to keep doing what it’s done over the past decade, which is to find support at every dip for a run to fresh record highs,” he said.

Europe stocks SXXP, -0.81% are sliding, while the Nikkei NIK, -1.63% stumbled in an otherwise mixed Asian session.

Investors are getting more negative on stocks, but “not bearish enough to trigger contrarian buy signals,” says Bank of America Merrill Lynch in our call of the day.

A contrarian strategy dictates that the time to buy an asset is when everyone really starts selling. It echoes a famous quote from billionaire investor and Berkshire Hathaway BRK.A, -1.27% BRK.B, -1.16%  chairman Warren Buffett, who has spoken of being “fearful when others are greedy and to be greedy only when others are fearful.”

The bank bases this on its sentiment indicator shown below, which swings from 1 to 10 — extreme bear to extreme bull. It advises selling when sentiment is above 8, and buying when it drops below 2.

Personal income, consumer spending rose for April, while core was also up, according to a fresh batch of data. Still to come is the Chicago purchasing managers index and the consumer sentiment index.

Trump tweeted early Thursday that Mexico tariffs will rise 5% and could go as high as 25% unless illegal immigration gets sorted. Mexican President Andrés Manuel López Obrador, told Trump in a letter that “social problems aren’t solved with duties or coercive measures” and asked for talks.

From Beijing. Hu Xijin, editor in chief of China’s Global Times, a tabloid with ties to the Communist Party, said he understands China will take “major retaliatory meaures “ against the U.S. over the Huawei crackdown.

Bloomberg reported Beijing has a ready-to-implement plan to curb exports of rare earth materials to the U.S., focusing on an important sub sector of the metal used in cars and most consumer goods.

Meanwhile, Vice President Mike Pence is reportedly planning a speech that will come down hard on China’s human rights record.

Rumors that North Korea may have executed a senior official tied to February’s failed summit between Trump and the country’s dictator Kim Jong Un, along with a few others, may not be true at all.

Uber UBER, +1.53% reported a roughly $1 billion loss in the first set of earnings since its IPO, but shares are up as executives say a price war with rival Lyft LYFT, +5.09% over ride-hailing fares is calming down.