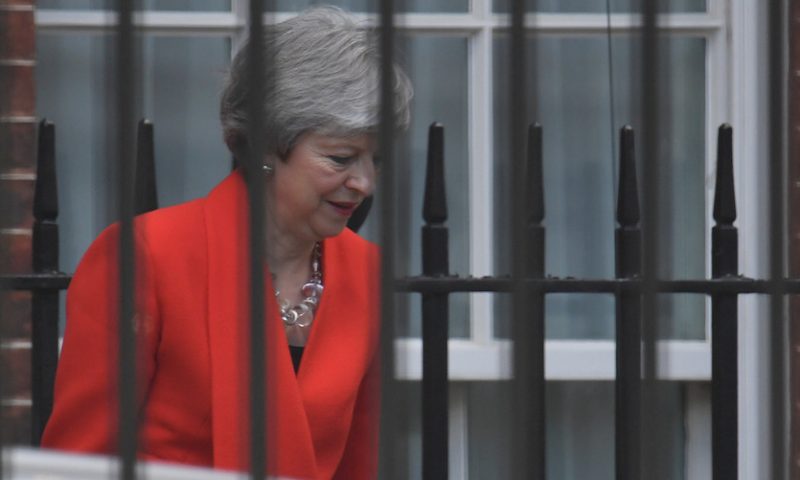 0K9N, -59.27% London’s markets ticked up on Friday, as investor trade-worry concerns were eased by U.S. President Donald Trump’s indication the ban on Huawei Technologies Co. could be eased.

The pound jumped after U.K. Prime Minister Theresa May announced she would be stepping down as leader of the Conservative Party, officially marking the end of her three-year struggle to steer the U.K. out of the European Union.

The pound GBPUSD, +0.4266% initially rose on the news May will step down as the country’s prime minister on June 7, which she announced during a public address from outside Downing Street. Sterling initially bumped up after she spoke, rising to a session high of $1.2725, before falling back to $1.2665.

“The fact is that sterling volatility is going to rise from here and Boris Johnson is going to go for the hard Brexit which is going to be a huge disaster for the country,” said Naeem Aslam, chief market analyst at TF Global Markets, in reference to the former foreign secretary and Brexiteer Johnson.

Outside of following political drama in the U.K., investors have been wading through a week of worrying headlines focused on the U.S.-China trade war.

However, fears were eased slightly on Thursday, after President Donald Trump said the U.S. could ease up on its ban against Huawei as “some part” of a wider trade deal with the country. But also stressed the Chinese company was “very dangerous” from a security standpoint.

More European citizens will head to the polls to vote in the European Parliamentary Elections. The results expected are on Monday, with voting taking place across Europe until Sunday.

Mothercare PLC MTC, +9.07%   jumped 11%, after the firm’s total adjusted losses came much lower than previously predicted by analyst.The companies decision to roll out a widespread restructuring and cost reduction plan has been seen as positive by investors.

“Store closures and internal restructuring coupled with the sale of the Early Learning Centre and sale and leaseback of their Watford Head Office has enabled them to reduce the debt burden,” said Helal Miah, investment research analyst at The Share Centre.