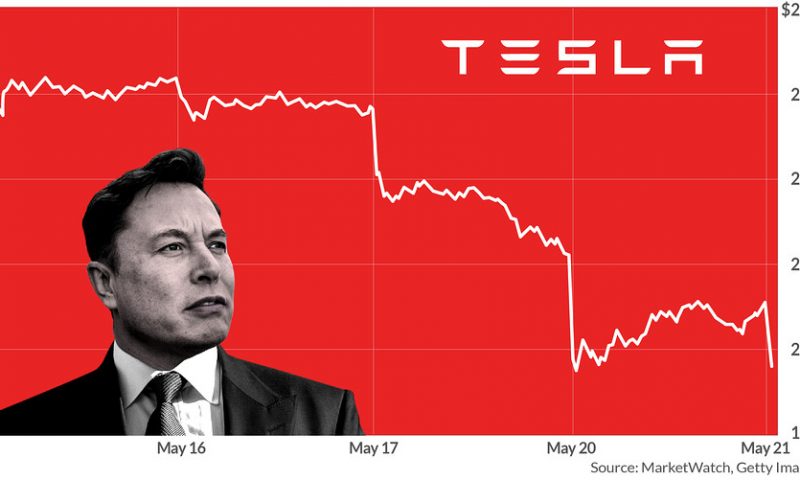 ‘Demand is at the heart of the problem,’ says analyst Adam Jonas

Tesla Inc. shares slid further on Tuesday after analysts at Morgan Stanley said their worst-case scenario for the stock is $10, mostly on concerns about faltering demand and worries that the Silicon Valley car maker might have grown “too big.”

The stock has been caught in a technical downdraft and a fresh volley of Wall Street criticism amid the company’s attempts to curb expenses and keep growing.

Tesla bonds went the way of the shares, and the 2025 bonds recently traded at 82.919 cents on the dollar to yield 8.932%, according to trading platform MarketAxess. On a spread basis, the notes were 676 basis points over Treasurys, 35 basis points wider on the day.

After Tesla tapped capital markets earlier this month, the 2025 bonds rallied from 85.664 to 87.168 on the dollar, the Morgan Stanley analysts said in the Tuesday’s note.

“From our perspective at least, it appears movements in news flow and sentiment in the equity market are informing moves in the credit market for Tesla,” they said. The company could end the second quarter with $13.3 billion in debt, which compares with a market capitalization of around $35 billion, the Morgan Stanley analysts said.

“Demand is at the heart of the problem,” they said. “We believe Tesla may have oversaturated the retail market for (electric sedans) outside of China.”

Moreover, “Tesla has grown too big relative to near-term demand, putting great strain on the fundamentals. The departure of key executives, price discounting, and extraordinary cost-cutting efforts add to the narrative of a company facing real potential stress,” they said.

In an email to employees leaked last week, Chief Executive Elon Musk said Tesla was embarking on a “hard-core” cost-cutting plan, which includes having Musk and Tesla’s chief financial officer scrutinize and preapprove all expenses. That news kicked off the latest stock move lower.

“This year’s sharp deceleration in demand has led to a substantial curtailment of the company’s ability to self-fund through free cash flow generation, at the margin potentially impacting the firm’s access to capital,” they said.

Moreover, Tesla’s recent equity and convertible debt raise “may provide an extra year of liquidity to run a business of this size and cash consumption,” but Tesla may find itself mired in a situation where a lower share price could contribute to lower employee morale and more counterparty risk involving both customers and suppliers, adding more pressure to company fundamentals, the analysts said.

Analysts at Baird also had a note on Tesla on Tuesday, sounding more optimistic and keeping their equivalent of a buy rating on the stock.

It could take “several weeks/months for the narrative to shift (shareholder meeting on June 11 potentially a catalyst),” the Baird analysts said in the note. “That said, we are not changing our recommendation, as we continue to believe (Tesla) is positioned to outperform over the long run, as the company increases profitability, generates free cash flow, and ramps production of innovative products.”

“Like other car companies, we periodically adjust pricing and available options,” a Tesla spokesperson said. “These pricing changes represent a reduction of about 2% to 3% in Model X and S prices. Last week, we raised US Model 3 prices by 1%. By any reasonable standard, these small changes are not newsworthy.”

Existing-home sales fall for the second straight month in April