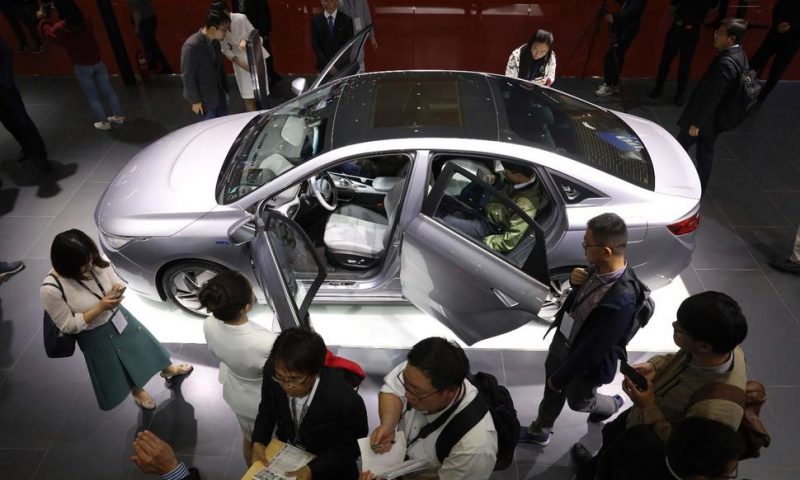 China’s auto sales fell 17.7% in April from a year ago, extending slump amid trade tension with Washington and cooling economic activity.

BEIJING — China’s auto sales sank 17.7% in April from a year earlier, the 10th straight month of decline amid trade tension with Washington and an economic slowdown.

Drivers in the industry’s biggest global market bought 1.6 million sedans, SUVs and minivans, according to an industry group, the China Association of Auto Manufacturers. Total vehicle sales, including trucks and buses, fell 14.6% to 2 million.

Jittery consumers are less willing to make big purchases amid a tariff war with Washington and unease about China’s economic outlook. Growth in the second-largest global economy held steady in the latest quarter but that was supported by government stimulus spending and higher bank lending.

The downturn is squeezing Chinese and global automakers that are pouring money into meeting government targets to develop electric vehicles.

Auto sales for the first four months of the year are off 14.7% from a year earlier at 6.8 million, according to CAAM.

Purchases of electric and gasoline-electric hybrid SUVs and sedans rose 18.1% to 97,000. That was a bright spot for the industry but well below growth rates of as much as 100% in previous months.

Beijing has promoted electrics with billions of dollars in research grants and buyer subsidies. But subsidies are due to end next year and regulators are shifting the burden to automakers by imposing mandatory sales targets for electrics.

So automakers need to develop electrics that can compete with gasoline-powered vehicles.

Sales of SUVs fell 15.8%, CAAM said, without giving a total.

The downturn has prompted suggestions Beijing will cut sales taxes or offer other incentives.