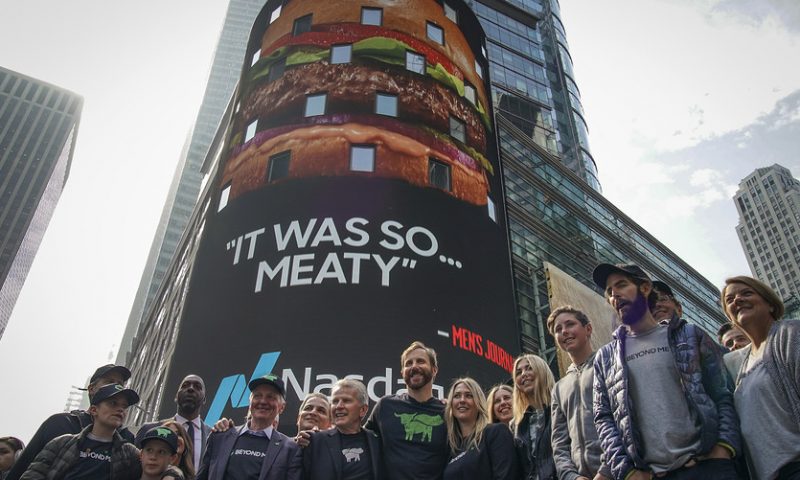 Speculation that the company may sign up some big restaurant names is helping fuel the rally, says analyst

Shares of plant-based-meat manufacturer Beyond Meat Inc. soared another 13% Tuesday, bringing the stock’s post-IPO gain to a stunning 240%, after Bernstein initiated coverage with a bullish outperform rating.

The company BYND, +5.86% , founded by vegan Ethan Brown in 2009, raised nearly a quarter of a billion dollars last week to grow its line of plant-based meats, with shares rocketing in their public debut. Excitement about the deal grew steadily after it first announced plans to go public late last year and hit new heights during its recent road show with investors, leading it to increase the size of the deal and raise its price range a day ahead of pricing.

“Beyond Meat served its own burgers at the road show, and then they ended up raising the price range,” said Kathleen Smith, principal at Renaissance Capital, a provider of institutional research and IPO exchange-traded funds. “The deal has been incredible. One reason is that it’s the only pure-play company doing this and because there’s an expectation they may sign up some big restaurants as clients.”

Speculation has been fueled by the presence of Don Thompson, chief executive and founder of venture firm Cleveland Avenue, on the Beyond Meat board, said Smith. Thompson is a former chief executive of fast-food giant McDonald’s Corp. MCD, -0.43% , which he helmed from 2012 until his resignation in 2015.

“Restaurant chains are finding that they can draw customers just because they have this meat alternative, so that’s another appeal [of the stock’s],” said Smith.

Oppenheimer analysts led by Alexia Howard signaled their confidence in the company in a note to clients Tuesday that set an $81 share-price target, more than triple the IPO pricing level of $25. That target is equal to 13 times Oppenheimer’s fiscal 2020 sales estimate, versus the 20 times 2019 sales the stock is currently trading at, said the note.

“If the alternative meat category develops along a similar path to plant-based beverages (from 5%-15% of the market around a decade after the almond milk innovation turbocharged the category), then the total addressable market could be [approximately] $40.5 billion in the U.S. within a decade,” Howard wrote in a note to clients.

Plant-based foods are more complex to manufacture than plant-based drinks, so the company may retain its competitive “moat” for some time, said the note.

“That said, Beyond Meat is up against Impossible Foods, which is staking out its turf in the restaurant space before launching into retail later this year, and larger players like Tyson TSN, -0.26% and Nestlé NESN, -0.29% are also looking to enter the U.S. market later this year,” the research note read.

Bernstein is expecting more than one brand to emerge as a winner, “although clearly staying ahead of peers in terms of taste and texture will be key, and other factors like Beyond Meat’s non-GMO status (a claim which Impossible Foods cannot make) could also help.”

Impossible Foods, the privately owned company behind the Impossible Burger that Burger King QSR, +0.27% is selling, is Beyond Meat’s biggest rival for now, although that’s unlikely to remain the case for long. Other smaller players in the space include Boca Foods, Field Roast Grain Meat Co., Gardein, Impossible Foods, Lightlife, Morningstar Farms and Tofurky.

The stock’s performance makes it the top-performing IPO of the year, but it’s far from the only one to have enjoyed strong gains, according to Smith. The biotech company Shockwave Medical Inc. SWAV, -0.73% is up 177% from its IPO price, while African e-commerce company Jumia Technologies AG JMIA, -5.09% has gained 140%. Zoom Video Communications Inc. ZM, -6.28% has risen 108% and PagerDuty Inc. PD, +0.00% has advanced by 103%.

More than half of the year’s IPOs are trading above their issue prices, observed Smith. “The first-day pop is getting higher than normal, which suggests investors are chasing some of these deals,” she said.