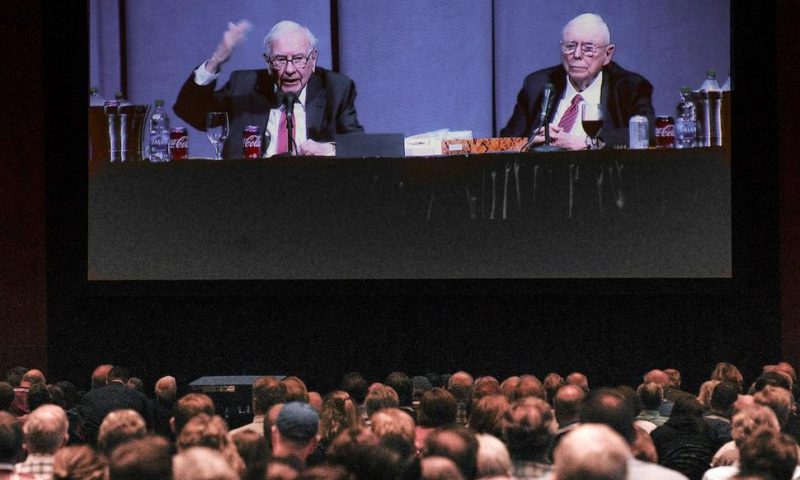 Thousands of Berkshire Hathaway shareholders return to Omaha every year to learn from Warren Buffett and celebrate the company he built through acquisitions and investments.

OMAHA, Neb. — Tens of thousands of Berkshire Hathaway shareholders return to Omaha every year to learn from Warren Buffett and celebrate the company he built through acquisitions and investments.

But with the 88-year-old Buffett and 95-year-old Charlie Munger leading the company, it’s hard for shareholders not to wonder how much longer the revered investors will be in place. And the fact that Berkshire is holding more than $114 billion in cash and short-term investments raises questions about what Buffett might buy next.

Shareholder Stephen Teenois, 30, made his first trip to this year’s meeting on Saturday after owning the stock for several years because he wanted to experience the event where Buffett and Munger spend hours answering questions.

“I just want to soak in everything I can and learn from him,” said Teenois, who is from Houston.

Buffett has said that Berkshire has a succession plan in place for whenever it is needed. Neither Buffett nor Munger has any plans to retire. Two longtime executives, Ajit Jain and Greg Abel, have been promoted to vice chairmen to help oversee Berkshire’s businesses. One of them will likely eventually be Berkshire’s next CEO.

Buffett said Saturday that both Abel and Jain have done a great job since they were promoted into the new roles in early 2018, and both earned about $18 million last year. Jain oversees the conglomerate’s insurance businesses while Abel oversees non-insurance business operations.

“You could not have two better operating managers than Greg and Ajit,” Buffett said.

Jim Weber, CEO of Berkshire company Brooks Running, said the transition from reporting directly to Buffett to reporting to Abel has gone smoothly.

Shareholder Bill Laub, 67, of Moline, Illinois, said he wasn’t worried about Buffett’s successor or the future of the company because he has faith in the team behind him.

“If something happened to Warren, there would be the shock and the blip, and then it will all be over,” Laub said.

Laub said he hopes there is another big acquisition in Buffett and Berkshire’s future. Buffett has said that he has had a hard time finding acquisitions selling for reasonable prices in recent years because the market has soared.

“I hope he finds something good to buy,” Laub said.

Buffett faced several questions about whether relatively recent deals, including Kraft Heinz, were paying off for Berkshire:

Buffett said he’s happy with Berkshire Hathaway’s partnership with the Brazilian firm of 3G Capital. The companies worked together to buy Kraft and Heinz, but recently the combined food giant had to write down the value of its brands by $15 billion.

“I’m pleased that we are partners, and it’s conceivable that something else could come up,” Buffett said.

Buffett said the main problem with the Kraft investment is that Berkshire and 3G overpaid for it. Buffett also said that he and 3G underestimated the challenges branded foods face from retailers and the growth of private label products.

Financial Planning When a Family Member Has Special Needs