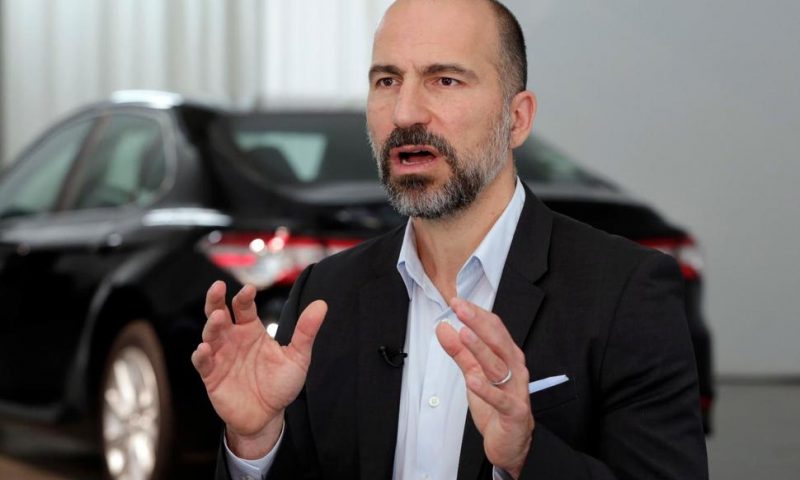 Uber’s CEO is barring his predecessor from taking part in the opening bell ceremony on the balcony overlooking the New York Stock Exchange next week, when the ride-sharing company is expected to make its hotly anticipated stock market debut.

NEW YORK — UBER’S CEO is barring his predecessor from taking part in the opening-bell ceremony at the New York Stock Exchange next week, when the ride-hailing company is expected to make its hotly anticipated stock market debut.

In a report published Friday, The New York Times cites unnamed sources who say Uber CEO Dara Khosrowshahi (kahs-row-SHAH’-hee) has decided that Travis Kalanick is not welcome to share the exchange’s balcony when Uber begins trading as a public company next Friday.

Kalanick co-founded Uber and was CEO until his ouster in 2017 following a series of damaging revelations that sullied the company’s reputation among consumers. Those included reports of rampant internal sexual harassment and allegations Uber stole self-driving car technology.

The blowback from the problems helped Uber rival Lyft pick up ground in the U.S. — something Uber acknowledged in its IPO filing — and led Kalanick’s ouster as CEO.

The Times’ report says Kalanick, who remains member of the company’s board of directors, asked to take part in the ringing of the opening bell at the NYSE, but Khosrowshahi refused.

The stock market debut of the world’s largest ride-hailing service is widely expected to be the biggest technology IPO since Chinese e-commerce giant Alibaba Group went public in 2014. And it will be the latest IPO in a parade of unprofitable technology companies, including Lyft, which had its IPO early last month.

Kalanick remains one of the biggest Uber shareholders, with an 8.6% stake, which means he stands to become a multibillionaire after the IPO.

Could you move your company to a four-day week?

Sinclair to Buy Regional Fox Sports Networks for $9.6B