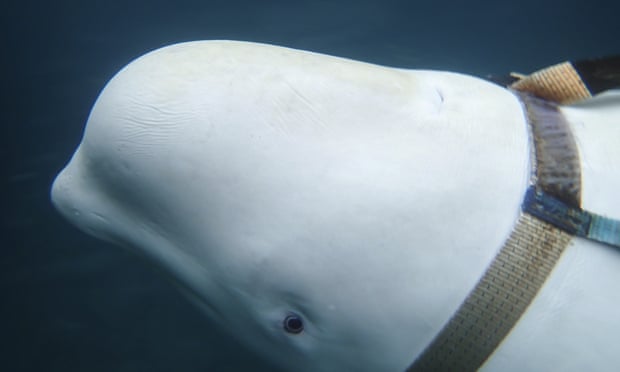 As experts fear for its survival, Tufjord residents told not to feed beluga so that it can learn to forage

A beluga whale that may – or may not – have been trained to spy for Russia appears to have defected to Norway, refusing to stray more than a few miles from the small northern harbour where it was found on Monday and entertaining locals with tricks.

“He’s so comfortable with people that when you call him he comes right up to you,” Linn Sæther, a resident of Tufjord on the Arctic island of Rolvsøya, told Norwegian public broadcaster NRK, which has launched a poll to find a name for the mammal.

Sæther said locals had been able to pet the whale, which was found at sea by Norwegian fishermen on Sunday wearing a harness fitted with a mount – apparently for a camera or weapon – and stamped with the words: “Equipment St Petersburg.”

The beluga performs twirls and leaps and happily retrieves plastic rings, she said, before swimming up to the dockside with its mouth open, as if looking for a fish in reward. “It is a fantastic experience, but also a tragedy,” she said.

“It’s clearly used to being given tasks and having something to do,” Sæther said. “It reacts when you call it or splash your hands in the water. You can see it’s been trained to fetch and bring back whatever is thrown for it.”

Tor Arild Guleng told the broadcaster the whale had followed his boat on a one-hour voyage from Rolvsøya back to Hammerfest. “It followed me, like an obedient dog without a lead,” Guleng said. “No wild animal seeks you out, sticks its head up and allow you to stroke its nose.”

Initial speculation was that the whale had escaped from a Russian military facility. Audun Rikardsen of Tromsø’s Arctic University of Norway said the Russian navy in Murmansk, the headquarters for Russia’s northern fleet, could be involved.

The Russian defence ministry has denied running a sea mammal special operations programme and Norway’s special police security agency (PST), which is examining the harness, has not yet concluded its investigation into where the whale came from.

An alternative theory, based on the whale’s tricks and the English inscription on its harness, is that it made its way to northern Norway after escaping from captivity in St Petersburg, Florida – except there are no aquariums or marine parks in that St Petersburg and in any case the distance is too great, Rikardsen said.

Wherever the whale came from, experts are now concerned about how it will survive. “It’s hard to see how it will manage on its own,” Rikardsen told NRK. “We know whales released from an aquarium can find it difficult to adapt to life in the wild.”

He said people should stop feeding the whale so it can learn to forage on its own and hopefully join a pod of fellow belugas – if one will accept him. Jørgen Ree Wiig of the Norwegian fisheries directorate told the broadcaster: “We are determined in any case to keep track of him, because he is now our responsibility.”

Are Retail Jobs in a Funk? It’s Complicated