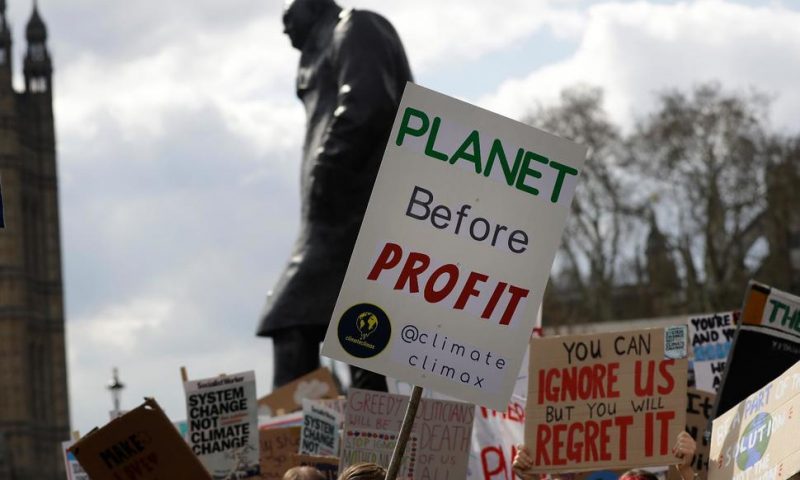 An independent committee that advises the British government on climate change says the UK should target net-zero emissions of greenhouse gases by 2050.

LONDON — The U.K. should eliminate almost all greenhouse gas emissions by 2050 by rapidly adopting policies that will change everything from the way people heat their homes to what they eat, an independent committee that advises the British government on climate change recommended Thursday.

A report from the Committee on Climate Change said the government must adopt ambitious goals if it wants to be a leader in the fight against global warming and limit the impact of climate change.

While Britain has laid the groundwork to achieve net-zero emissions of greenhouse gases, existing plans “must be urgently strengthened” because “current policy is not enough even for existing targets,” the committee said.

The panel says the government should reduce the demand for energy overall, increase the electrification of the British economy, develop hydrogen fuel technology, plant more trees and set ambitious targets for carbon capture and storage.

It also calls for reduced consumption of meat and dairy products, changes in how farmers operate and a requirement for electric vehicles to be the only option by 2035.

“We can all see that the climate is changing and it needs a serious response,” committee chairman John Gummer said. “The government should accept the recommendations and set about making the changes needed to deliver them without delay.”

Environmental groups welcomed the findings, but the proposals could be seen as daunting to some businesses and the government.

Prime Minister Theresa May is under pressure to act more boldly on climate change after a visit by teenage climate activist Greta Thunberg and 10 days of protests that shut down traffic in central London and put the issue squarely on Britain’s political agenda.

Parliament voted Wednesday for a non-binding motion from the main opposition Labour Party urging Britain to declare a “climate emergency.”

Some activists have called for Britain to set a 2025 target for net-zero emissions.

The committee said it considered earlier net-zero target dates, but 2050 was the most credible goal.

“An earlier date has been proposed by some groups and might send a stronger signal internationally to those considering increasing their own ambition, but only if it’s viewed as credible,” the panel said.

Environmentalists at the National Trust, the Royal Society for the Protection of Birds, the WWF and the Women’s Institute and Woodland Trust said the panel’s work showed that reaching net-zero emissions is both necessary and feasible.

While the alliance of environmental groups applauded the committee’s decision to target all greenhouse gases — not just carbon — and to include shipping and aviation emissions in its calculations, it said it believes Britain should move faster and strive to achieve the goal by 2045.

“The problem is, we’ve been acting as if we have time,” said Gareth Redmond-King, head of climate change at WWF, formerly known as the World Wildlife Fund. “But if we want a world with coral reefs, safe coastal cities and enough food for everyone, we must act now.”

The government said it would respond to the recommendations “in due course.”