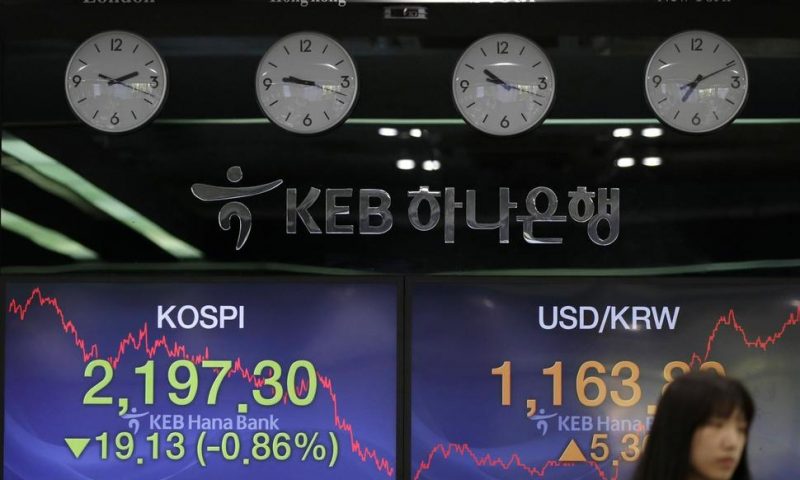 Benchmarks in Paris, Hong Kong and Sydney declined while London and Frankfurt were little-changed. Shanghai advanced. Japanese markets were closed for a holiday.

Monthly gauges of Chinese manufacturing from a business magazine and an industry group showed activity grew in April but more slowly than the March rate. That added to signs China’s economic downturn is bottoming out, but investors were disappointed the data weren’t better.

April data are a “pretty soggy picture,” Chris Weston of Pepperstone said in a report. “The data flow through Asia has reinforced the issue that if you want growth, you head Stateside.”

On Monday, the S&P 500 index moved further into record territory after Commerce Department data indicated the U.S. economy is growing but not too fast.

In China, Caixin magazine’s purchasing managers’ index showed factory activity fell to 50.2 on a 100-point scale from March’s 50.8. A separate index by the China Federation of Logistics & Purchasing declined 0.4 points to 50.1, just above the 50-point line that indicates activity is accelerating.

That suggests some of March’s improvement was due to the rebound from the Lunar New Year holiday, when factories close for up to two weeks, said Bill Adams of PNC Financial Services Group. But he noted it was the second-strongest reading since October.

Big gains for banks led the way on hopes for bigger profits from making loans, but losses for high dividend stocks held indexes in check.

Both the S&P 500 and Nasdaq closed at record highs.

A Commerce Department report showed the economy is growing but not too fast.

Consumer spending jumped 0.9% in March, the biggest gain in nearly a decade. But the same report also showed that the Federal Reserve’s preferred measure of price changes remains well below its target.

Low inflation gives the central bank more leeway to hold off on raising interest rates. It was the Fed’s pledge earlier this year to be patient on rates that sent stocks surging. The Federal Reserve will meet again on interest rates this week, and most investors expect it to make no changes.

ENERGY: Benchmark U.S. crude gained 34 cents to $63.84 per barrel in electronic trading on the New York Mercantile Exchange. The contract gained 20 cents on Monday to close at $63.50 per barrel. Brent crude, used to price international oils, rose 35 cents to $71.89 per barrel in London. The contract rose 11 cents the previous session to $71.54.

How tech is bringing Israelis and Palestinians together