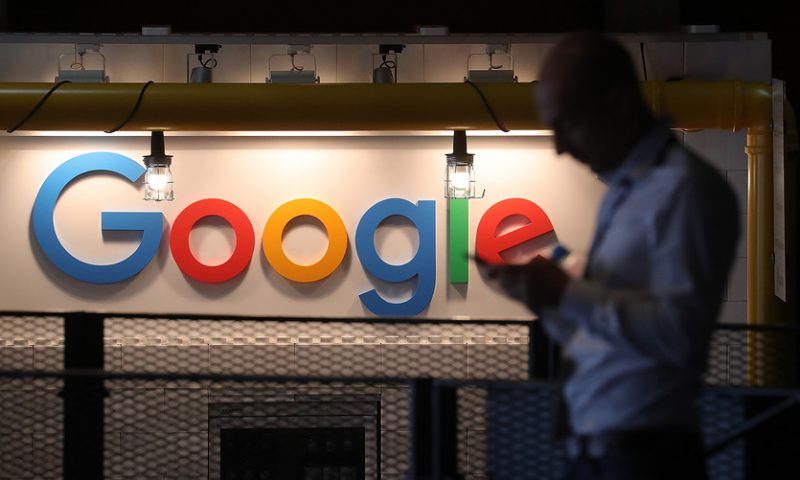 Google profit continues to be buoyed by paper gains on its investments, as long as you ignore giant fines

Alphabet Inc. absolutely destroyed earnings expectations in every quarter in 2018 — but there are two big reasons for that.

Google’s parent company beat analysts’ quarterly earnings estimates by an average of about 27% last year, and never by less than 17.5% in any of the four quarters, according to FactSet records. Those beats were fueled not by actual money flowing into the company for ads sold on Google or any of Alphabet’sGOOGL, +0.17% GOOG, +0.18%  myriad other businesses, but rather paper profit on investments the company has made. It also ignores huge fines Google expects to pay the European Commission.

Companies were forced to begin counting unrealized gains on their investments every quarter in 2018, much to Berkshire Hathaway Inc. BRK.A, +0.78%BRK.A, +0.78% Chief Executive Warren Buffett’s chagrin. Alphabet — which Google’s founders seemed to form in Berkshire’s image — saw huge changes because of it: In total, Google reported profit of $30.74 billion in 2018, and a hair more than $4 billion of that total came from net increases in the value of its investments, which are not fully disclosed.

That increase was more than wiped out by a $5 billion antitrust fine out of Europe for Google’s practices with Android, its mobile operating system. However, while Alphabet typically reports only GAAP financial results, it makes an exception for these big fines and reports earnings without the money it is setting aside for a fine, and investors and analysts typically focus on that number.

In other words, Google is much more profitable than has been expected, as long as you count paper gains on investments that are not spelled out in full and ignore gigantic fines for practices Europe deems anticompetitive. When Alphabet reports first-quarter earnings Monday afternoon, both of those factors will be in full effect.

Alphabet has already said that it will realize its latest European fine — a $1.7 billion penalty for online-advertising practices that was announced in March — in this quarter’s earnings report. Alphabet Chief Accounting Officer Amie Thuener said in an announcement that fine will be part of the GAAP accounting, but will also be broken into its own expense line.

In that same announcement, Thuener said that Alphabet will slightly change the way it presents its investment gains, which will make that profit even more opaque. Performance fees paid out to those responsible for the investments will no longer be spelled out explicitly — Alphabet will instead only report the net gains after accounting for performance rewards.

Alphabet’s investments could get a meaningful boost this year — and in the first-quarter report — as some of its ventures pay off amid a wave of initial public offerings.

“The Lyft LYFT, +0.09%  IPO should also result in a meaningful investment gain in 1Q (Alphabet’s investment units held an aggregate of ~12.8mm shares prior to the offering),” Stifel analyst Scott Devitt noted.

Earnings: Analysts on average expect Alphabet to report earnings of $10.53 a share, according to FactSet, though it appears they are probably not taking the latest fine into account in those estimates as they have not come down appreciably since the fine was announced. Alphabet reported earnings of $13.33 a share in the same quarter a year ago, thanks to a huge boost in investment income largely from its stake in Uber Technologies Inc. UBER, +0.00%  .

Contributors to Estimize, a software platform that uses crowdsourcing from hedge-fund executives, brokerages, buy-side analysts and others, call for $10.90 a share in earnings.

Revenue: Alphabet is expected to post first-quarter revenue of $30.04 billion after accounting for traffic-acquisition costs, according to analyst estimates. Estimize contributors on average project $30.18 billion. The company reported ex-TAC revenue of $24.86 billion a year ago.

Analysts don’t appear concerned about the latest fine out of Europe, or any of the negative issues or backlash against tech around the world.

“Despite more signs of increased industry regulation on the horizon, a healthy appetite for higher taxes in Europe, another congressional testimony, a constant flow of unflattering media reports, another European Commission fine, the discovery of an undisclosed microphone in Nest Secure devices and a growing chorus to break up the company, Alphabet has remained busy on the innovation front this year,” summed up Monness Crespi Hardt analyst Brian White, who has a buy rating and a $1,315 price target.

RBC Capital Markets analyst Mark Mahaney noted that Facebook Inc. FB, -0.15% — which has had its own regulatory issues — as well as Twitter Inc. TWTR, +0.47% and Snap Inc. SNAP, +2.02% reported strong earnings, suggesting internet-advertising trends are good for Google. Mahaney, who has an outperform rating and $1,300 price target, puts more stock in those trends than the fine.

“This is the third time Google has been fined since 2017 by the EC, and brings the total fines to $7.7B,” Mahaney wrote last week. “We do not believe this will impact fundamentals going forward, as the commission didn’t order any new changes to Google’s business.”

Most analysts cautioned to keep an eye on Alphabet’s margins, after the company promised to continue spending heavily on capital expenditures, adding workers and other long-term investments in its previous report, which weighed on the stock.

“Alphabet is prioritizing platform investment over harvesting earnings, and we expect technology, product, and head count will continue to outgrow revenues,” wrote Baird Research analyst Colin Sebastian, who has an outperform rating and $1,380 price target on the stock.

Stifel’s Devitt, though, said that he expects margins to stabilize in 2019 as some costs normalize, and expects to revisit his valuation after this report. Currently, Devitt rates Alphabet a buy with a $1,287 price target.

Among new initiatives that analysts said they are waiting to hear more about from Alphabet are Google’s new game-streaming service, Stadia, which was announced at the Game Developers Conference earlier this year, and Google Cloud, which recently held its first developer conference since Thomas Kurian took over the helm from Diane Greene.

Almost all analysts have a buy rating on Alphabet, with only two of 42 tracked by FactSet holding a hold rating and none calling the stock a sell. The average price target is $1.356.41, 6.6% higher than Friday’s closing price.