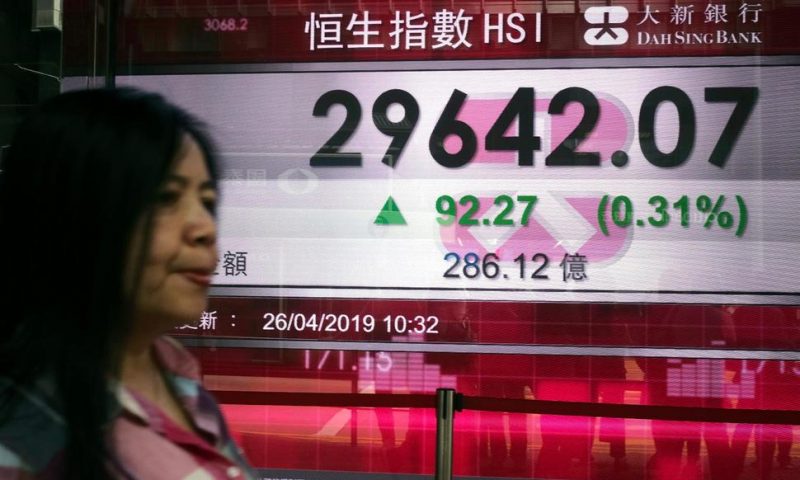 Global stock markets are mostly lower amid weak corporate news and ahead of the release of U.S. economic growth data later in the day.

BANGKOK — Global stock markets mostly edged lower on Friday amid weak corporate news and ahead of the release of U.S. economic growth data later in the day.

Corporate news has been mixed, with carmaker Daimler reporting a drop in earnings for the first quarter and Deutsche Bank expecting weaker revenues. Uber priced the shares it aims to sell in a lower range after the IPOs of rival tech companies like Lyft underwhelmed expectations.

In the U.S., earnings reporting season is about a third of the way in, and results have been mixed. Amazon’s profits have jumped but Intel cut its forecasts.

Analysts are forecasting a drop of 2.8% in earnings for S&P 500 companies this time around, not as bad as the 4% decline they were expecting a few weeks ago.

Investors will look to U.S. growth figures as well. Economists have been upgrading their estimates, with many forecasting that GDP expanded at an annual rate of close to 3% in the first three months of the year. That would be up a full percentage point from previous estimates.

India’s Sensex jumped 0.9% to 39,066.97. Shares fell in Taiwan, Singapore, Malaysia and Thailand but rose in Jakarta.

China-U.S. trade talks are again on the agenda, for next week in Beijing, with further talks in Washington slated for May 8.

President Donald Trump has said his Chinese counterpart, Xi Jinping, might be visiting the White House soon, but the timing remained unclear. Progress on a deal resolving a conflict over Beijing’s technology policies that has involved billions of dollars in tariffs being imposed on each other’s products would reassure investors who have been rattled by the uncertainty.