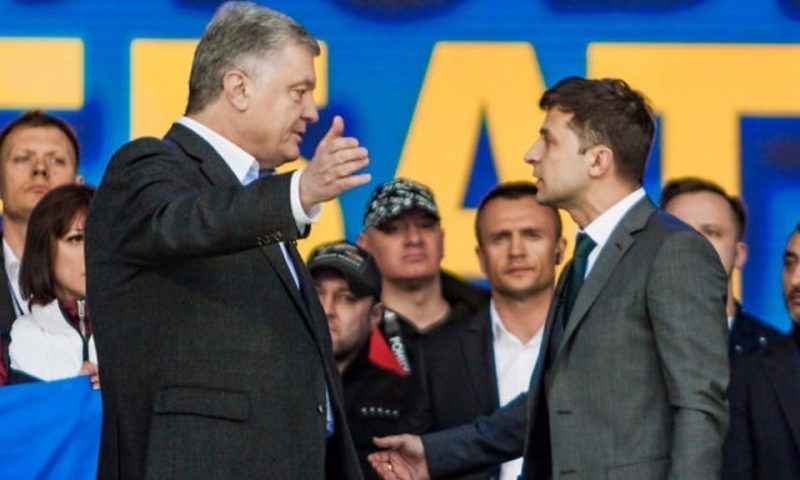 Ukrainians will head to the polls shortly in a run-off election to pick the country’s next president.

The TV celebrity is favourite in the polls, having dominated the first round of voting three weeks ago when 39 candidates were on the ticket.

A court in the capital, Kiev, has rejected a lawsuit calling for Mr Zelensky to be barred from standing.

A man had complained that the distribution of free tickets for a presidential debate by Volodymyr Zelensky’s candidacy amounted to bribery.

On Friday the two candidates appeared at Kiev’s Olympic stadium to debate for the first time.

The televised event was their first face-off after an usual campaign where Mr Zelensky has primarily used social media to communicate with the voting public.

The winner of Sunday’s vote will be elected for a five-year term as president.

The position holds significant powers over the security, defence and foreign policy of the country.ADVERTISEMENT

Who are the candidates?

In Ukraine Mr Zelensky, 41, is best known for starring in a political satirical drama called Servant of the People.

In it he plays a teacher who accidentally becomes Ukrainian president after his rant about the nation’s politics goes viral on social media.

He is now running under a political party with the same name as his show.

With no previous political experience, his campaign has focused on his difference to others rather than on any concrete policy ideas.

Despite this, he won the first round with more than 30% of the vote – almost double what Mr Poroshenko got when he finished in second place with 15.95%.

The incumbent president, who has been in power since 2014, described the result as a “harsh lesson”.

Mr Poroshenko, 53, is a billionaire who made his fortune primarily through his confectionery and TV businesses.

He was elected after an uprising overthrew the country’s previous, pro-Russian government.

The stadium debate between the candidates on Friday was much-anticipated in Ukraine, after the comedian challenged the president to the unconventional event.

After his acceptance, there was a public disagreement between the pair over when it would be held.

Last week, Mr Poroshenko turned up and debated an empty podium after his opponent was absent at the date he suggested.

A leap into the unknown?

The choice Ukrainians are facing is whether to stick to what they’ve had for the last five years in Petro Poroshenko or take a leap into the unknown with the comedian candidate, Volodomyr Zelenksy.

Mr Zelensky is a well-known entertainer but quite what, if anything, he stands for politically has not become clear during the election campaign.

He has however demonstrated that he can act presidential – but only by playing the part in a TV series.

Ukraine is fighting a war against Russian-backed forces in its east and President Poroshenko has repeatedly stressed the need for someone with political experience.

Unfortunately for him, all the surveys show that Ukrainians are fed up their politicians who are widely regarded as corrupt and in the pockets of rich oligarchs.

How much of Europe does China own?