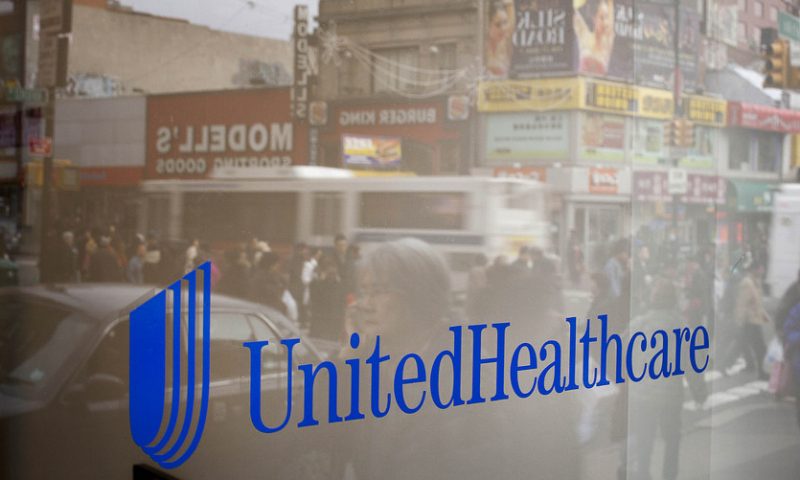 In a sign of investors’ growing anxiety about the health-care regulatory landscape, shares of UnitedHealth Group Inc. tumbled Tuesday, despite the company reporting first-quarter earnings and revenue that beat expectations and boosting its full-year profit outlook.

The health insurance giant’s stock UNH, +0.70% was up as much as 3.4% in intraday trade moments after the opening bell, then steadily traded lower throughout the session, as did the shares of the company’s peers, as Chief Executive David Wichmann took a combative stance toward “Medicare-for-all” proposals unveiled by some Democratic presidential hopefuls.

“The wholesale disruption of American health care being discussed in some of these proposals would surely jeopardize the relationship people have with their doctors, destabilize the nation’s health system, and limit the ability of clinicians to practice medicine at their best.”UnitedHealth CEO David Wichmann

The shares fell 4.5% in afternoon trade, enough to pace the Dow Jones Industrial Average’s decliners. The price decline of $10.26 cut about 70 points off the Dow’s price, which was up 82 points.

Analysts chalked up the disparity between the earnings report and the stock reaction to what they’re calling the “Medicare-for-All overhang.”

“We believe the market is ascribing an inordinately high probability that some form of Medicare-for-all proposal could become reality,” Cowen analyst Charles Rhyee said in a note to clients on Tuesday.

“The problem… is that investors are making many assumptions about unpredictable future events that all have to fall the right way in order for Medicare for All to be a possibility,” he said.

It’s not likely that all those pieces will fall into place, Rhyee said. For such a bill to pass, a far-left presidential candidate would have to wine the White House, Democrats would need to win at least 11 seats in the Senate and they would need retain a majority in the House, he noted. And that’s just the beginning — not all Democrats would support the bill, and such a bill could come under strong resistance from hospitals and some doctors, who would likely receive significantly lower reimbursement under such a proposal.

“In our view, Medicare for All fails the Occam’s razor test,” he concluded.

In other words, the UnitedHealth’s share price plunged not necessarily because the company is doing something wrong, but because investors are reacting to chatter about changes in the regulatory landscape — most recently, the renewed possibility of a Medicare-for-all plan.

And CEO Wichmann tried to address those concerns, but instead may have fueled them by acknowledging the threat.

“The wholesale disruption of American health care being discussed in some of these proposals would surely jeopardize the relationship people have with their doctors, destabilize the nation’s health system, and limit the ability of clinicians to practice medicine at their best,” Wichmann said, according to a transcript provided by FactSet. “And the inherent cost burden would surely have a severe impact on the economy and jobs, all without fundamentally increasing access to care.”

Keep in mind his comments come after the stock suffered last week the worst weekly percentage performance since September 2009, highlighted by a two-day plunge of 9.3% in the wake of Senator Bernie Sanders’ unveiling of his “Medicare-for-all” plan.

Wichmann seems to want more of the same, saying universal coverage could be “substantially” reached through “existing public and private platforms.” He said the “innovative and proven” private-sector solutions can achieve everyone’s goal of access, choice and coverage protections, at a “fair cost,” though he did not provide specifics.

His tone seemed to clash with the more cooperative and constructive stance he took three months ago. In a Jan. 15 conference call following fourth-quarter results, Wichmann said the nation “is early in an exciting health care innovation wave,” which he expects UnitedHealth to “help lead.”

Back then, he said whatever the political sentiment, “whether there’s a liberal or conservative administration,” health care products are always in demand, and UnitedHealth was in a “unique” position to benefit.

Evercore ISI analyst Michael Newshel said that investors were “fearing fear itself” in a Tuesday note to clients.

“UNH has continued to deliver a consistent level of outperformance and is navigating actual near-term policy changes like drug rebates while earnings fundamentals for the MCO group remain strong,” he said. “But the Medicare-for-All overhang remains the dominant narrative.”