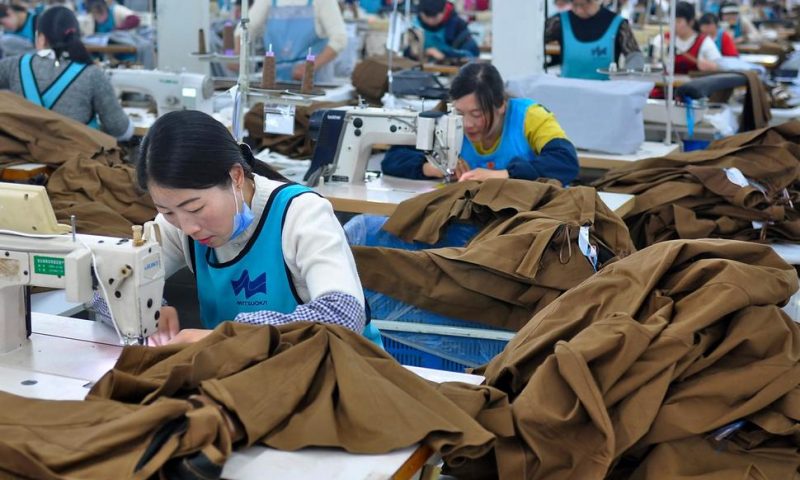 SHANGHAI — China’s economic growth held steady in the latest quarter despite a tariff war with Washington as Beijing’s efforts to reverse a slowdown started to gain traction.

— China’s economic growth held steady in the latest quarter despite a tariff war with Washington as Beijing’s efforts to reverse a slowdown started to gain traction.

The world’s second-largest economy expanded by 6.4% over a year before in the three months ending in March, the government reported Wednesday. That matched the previous quarter for the weakest growth since 2009.

“This confirms that China’s economic growth is bottoming out and this momentum is likely to continue,” said Tai Hui of JP Morgan Asset Management in a report.

A revival in Chinese growth and demand for imports could help to shore up weakening global economic activity. China is the biggest export customer for its Asian neighbors and a top market for autos, mobile phones and other consumer goods, food and industrial technology.

Beijing’s decision to reverse course temporarily on a campaign to rein in rising debt “is starting to yield results,” Hui said.

Consumer spending, factory activity and investment all accelerated in March from the previous month, the National Bureau of Statistics reported.

Forecasters expect Chinese growth to recover this year. They had predicted a revival last year but pushed back that time line after President Donald Trump hiked tariffs on Chinese imports over complaints about Beijing’s technology ambitions.

The fight between the two biggest global economies has disrupted trade in goods from soybeans to medical equipment, battering exporters on both sides and rattling financial markets. The two governments say settlement talks are making progress, but penalties on billions of dollars of each other’s goods are still in place.

At a news conference to release an annual report on the state of U.S.-China trade relations, the chairman of the American Chamber of Commerce in China, Timothy Stratford, said trust between the sides had “reached a low point.”

However, Stratford said the ongoing trade talks were the “most extensive, and the most valiant effort of the two governments to reach agreement that we’ve seen in at least two decades.”

“So it seems that the only choice that is attractive is that the two sides have a deal that is a really good deal and that holds together,” Stratford said.

Meeting deadlines is less important that “making sure that the final deal is a really good deal that will hold together,” he said.

China’s Communist leaders also are promising to make the state-dominated economy more productive by giving entrepreneurs and foreign companies a bigger role in autos, finance and other industries.

China’s top economic official, Premier Li Keqiang, reduced the 2019 annual growth target of 6 to 6.5% in March after last year’s rate fell to a three-decade low of 6.6%.

Li warned of “rising difficulties” in the global economy and said the ruling Communist Party plans to step up deficit spending this year to shore up growth.

The stimulus measures have temporarily set back official plans to reduce reliance on debt and investment to support growth.

Also in March, exports rebounded from a contraction the previous month, rising 14.2% over a year earlier. Still, exports are up only 1.4% so far this year, while imports shrank 4.8% in a sign of weak Chinese domestic demand.

Auto sales fell 6.9% in March from a year ago, declining for a ninth month. But that was an improvement over the 17.5% contraction in January and February.

Investment in construction will support growth but “the outlook is cloudier for the rest of China’s economy” due to weak auto sales and a global manufacturing slowdown, Bill Adams of PNC Financial Services Group said in a report. He said full-year growth is likely to be just 6.2%.

Economists warn that even if Washington and Beijing announce a trade settlement in the next few weeks or months, it is unlikely to resolve all the irritants that have bedeviled relations for decades.

The two governments agreed Dec. 1 to postpone further penalties while they negotiate, but punitive charges already imposed on billions of dollars of goods stayed in place.

Even if they make peace, the experience of other countries suggests it can take four to five years for punitive duties to “dissipate fully,” Jamie Thompson of Capital Economics said in a report last week.

Chinese leaders warned previously any economic recovery will be “L-shaped,” meaning once the downturn bottoms out, growth will stay low.

Credit growth accelerated in March, suggesting companies are stepping up investment and production.

Total profit for China’s national-level state-owned banks, oil producers, phone carriers and other companies rose 13.1% over a year ago in the first quarter, the government reported Tuesday. Revenue rose 6.3% and investment rose 9.7%.