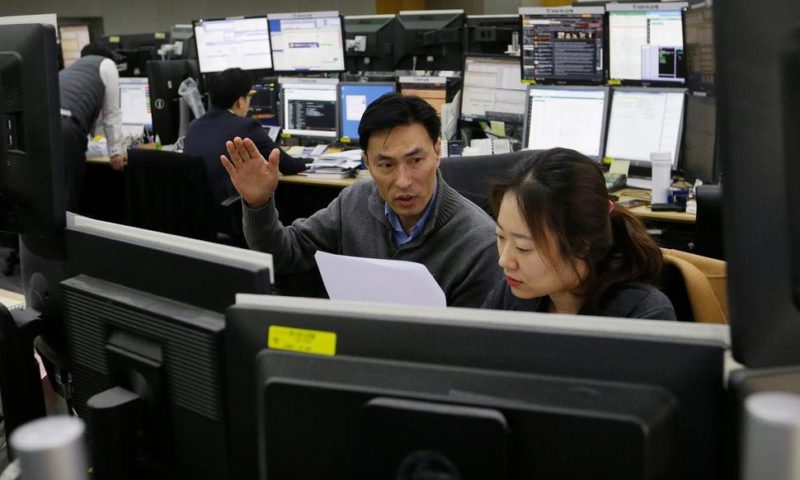 SINGAPORE — Global shares rose Wednesday ahead of the resumption of trade talks between the U.S. and China in Washington and amid hopes that Britain’s exit from the European Union could be less disruptive for business than previously feared.

In a surprising about-face, British Prime Minister Theresa May said she would seek to delay Brexit and hold talks with the opposition to find a compromise. May and Labour Party leader Jeremy Corbyn were to meet Wednesday for talks, which could point Britain toward a softer Brexit than the one May has championed since the June 2016 decision to leave the EU. Labour wants the U.K. to remain in a customs union with the bloc to ensure frictionless trade, but May has always ruled that out.

European markets mostly rose, with France’s CAC 40 gaining 0.6% to 5,454 and Germany’s DAX picking up 1.1% to 11,887. Britain’s FTSE 100 was flat after a survey showed that the country’s huge services sector contracted in March for the first time since the immediate aftermath of the 2016 Brexit vote.

Trade negotiations between the U.S. and China are due to restart later Wednesday in Washington. Negotiators from the world’s two biggest economies are aiming to put to rest a dispute over technology and other issues. They met in Beijing last week.

Both sides have said they were making progress toward a deal, but how close they are getting is unclear.

“There has been so much chatter that U.S.-China trade is in the price and there is obvious merit to that as we have been talking about ‘progress’ for many months,” Chris Weston of Pepperstone Group Limited said in a market commentary.

In Asia, traders cheered a private survey released Wednesday showing that China’s services sector expanded in March. China’s Caixin Services PMI, a survey of service industry purchasing managers, had a reading of 54.4 in March. This is markedly better than February’s reading of 51.1 and the sharpest improvement since January 2018.

The index is on a 100-point scale, with 50 separating contraction from growth. This added to optimism after China released encouraging manufacturing data over the weekend.

ENERGY: Benchmark U.S. crude picked up 10 cents to $62.68 per barrel in electronic trading on the New York Mercantile Exchange. The contract added 99 cents to $62.58 per barrel on Tuesday. Brent crude, used to price international oils, gained 37 cents to $69.74 per barrel. It closed 36 cents higher at $69.37 per barrel in London.

Malaysia to Sell Yacht at Center of 1MDB Scandal for $126M