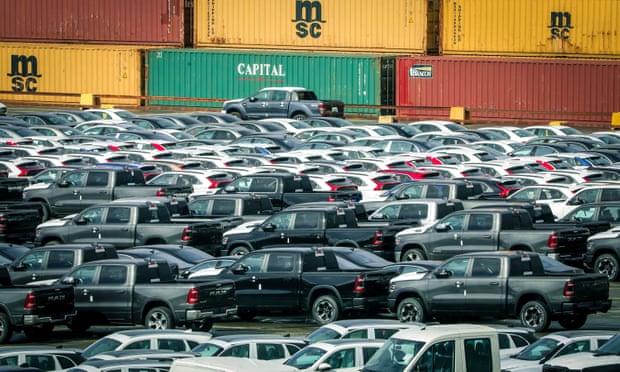 The prospect of trade war with China has receded, but so have hopes of the US economy continuing its 2018 growth rates

There was a sense of relief across global financial markets this weekend after the hardliners among Donald Trump’s trade negotiators appeared to soften their line on import tariffs against Chinese goods.

Treasury secretary Steve Mnuchin and trade representative Robert Lighthizer let it be known that talks last week had been “constructive”, which was taken as code for Beijing virtually capitulating to Trump’s demands.

But the cheers from traders were somewhat muted when Mnuchin’s remarks coincided with a downward revision in US GDP and a raft of economic data from around the world that many analysts interpreted as a signal of impending recession.

Figures published last week showed that the US economy expanded at an annual rate of 2.2% in the last three months of 2018, down from an estimated 2.6%, and well below the 3.4% growth achieved in the third quarter.

President Trump has regularly touted 5% as the true growth rate of his turbocharged US economy, so it was probably just as well for the White House that so much attention was focused on the Mueller inquiry rather than official economic data last week.

As if to make matters worse, a major survey last week showed US consumer confidence also falling as pessimism increased. Along the same lines, company bosses also reported a sharp drop in confidence.

One cause of jangling nerves in US company boardrooms relates to slowing growth in China. According to a survey of purchasing managers in February, China started the year with its lowest level of new export orders for 10 years. Factory production contracted and unemployment in some regions increased. Only an injection of government spending and looser credit had kept domestic orders high, according to the survey.

Japan, after a three-year run of good fortune, is also looking decidedly shaky. Some analysts forecast a sharp contraction in Japanese GDP in the first three months of the year, potentially wiping out the 0.5% rise seen last quarter.

Europe is another weak link. Last week, the head of the European Central Bank, Mario Draghi, suggested that there could be a further delay to a rise in eurozone interest rates, such was the weak growth outlook for the global economy. The economies of the 18 members of the eurozone are not expected to grow by more than 1.1% this year, and inflation is expected to get nowhere near the ECB’s 2% target.

And as a background to all this, forecasts from the Bank of England and business groups say the UK will not be growing at more than 1.2% this year.

With the major economic blocs doing little more than stand still, it is difficult to see how the US can sail along at anything more than 2% annual GDP growth through the rest of this presidential term.

Stock markets have remained steady over recent months, but bond markets have smelled the growing despondency in political circles and rushed towards safe havens.

German and US sovereign bonds were the main beneficiary. In the US, the interest rate on 10-year bonds fell below those for three-month ones, a phenomenon known as a yield curve inversion. The shift – the first since 2007 – is a firm predictor that the economy is worsening and the Fed is going to cut rates. Yield curves have inverted before each of the past seven recessions.

As one analyst pointed out last week, the president “owns the economy”. That was good for ratings last year, but may not be next year when he runs for re-election.

Ashley’s Debenhams mess is of his own making

Mike Ashley thinks Debenhams’ advisers deserve to go to prison. He didn’t specify the imagined crime but presumably it would involve the impoverishment of Debs shareholders, of which his Sports Direct outfit is the largest.

Ashley’s fellow travellers at Sports Direct – the minority investors – might also have opinions about justice. The first target of their ire might not be the advisers, but Ashley himself. His obsessive pursuit of Debs, with its £560m of debt, has been a financial calamity for all Sports Direct’s owners.

Of course, the department store group wasn’t losing money when Ashley started buying shares five years ago. But the sportswear retailer’s 29.7% stake, accumulated at a cost of roughly £150m, is now almost worthless. Sports Direct could get involved in the financial reconstruction of Debs, but only if it puts up even more cash. All avenues are unpalatable.

The opportunity Ashley thought he’d spotted in 2014 was the chance to do commercial deals with Debs. It was never explained (it rarely is with Ashley) why ownership of even a single share was required to further that ambition, but one thing led to another. The endgame was a battle for control in which Sports Direct has been frustrated.

Ashley’s mistake was to speculate on Debs’ shares, rather than its debt. In any extreme financial restructuring, lenders hold the aces. A board’s duty is to seek corporate survival. That invariably means listening to lenders’ demands first. Given that Debs owes more than a half a billion quid, the ability to preserve value for shareholders was always limited.

Ashley can stamp his feet and throw insults. Sports Direct investors might prefer him to concentrate on running their company and never buy a share on their behalf again.

British carmakers are stuck in neutral over Brexit and batteries

The British car industry is at a pivotal point. Will the crown jewel of UK manufacturing take a lead in the electric and driverless revolution, or fall behind rivals as Brexit takes its toll?

Since 23 June 2016, industry opinion has tilted firmly towards the negative view, but recent developments have given cause for some optimism. So is the gloom lifting? Toyota revealed this month that its Burnaston plant in Derbyshire will build new cars for fellow Japanese carmaker Suzuki. Then, last week, sources said that the interest of BMW executives had been piqued by the possibility of taking over Honda’s Swindon plant. A potential buyer would represent a welcome turnaround after the Japanese company’s shock decision to close the factory – which has built the Civic for 25 years – in 2021.

But unfortunately these green shoots are not likely to herald a spring. BMW denied the Honda reports, even though sources say the company has at least entertained the idea. Mixed messages from the German carmaker illustrate the confusing landscape facing the sector: a board member has warned that BMW’s Mini factory in Oxford could be forced to close in the event of a no-deal Brexit, while weeks later its head of production played down the impact of a disorderly EU departure.

Meanwhile, the global race for full electrification has begun in earnest amid a slump in diesel sales that endangers UK producers further. At this key moment, investment into British car manufacturing has slumped, exemplified by Honda and Nissan’s decision to withdraw production of the X-Trail SUV in Sunderland.

Spending almost halved during 2018 to £588.6m, a fall that the industry blames on Brexit uncertainty. It will take a lot more in the way of positive announcements from Toyota to shift the downward momentum.

BMW’s havering sums up the industry’s predicament: it is stuck in neutral and on the brink of reverse.

Stock market at crossroads after strongest quarterly rise in a decade