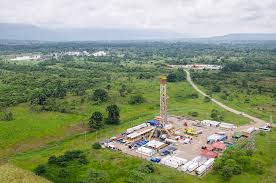 811,454 shares exchanged hands over the course of the day as compared with an average daily volume of n/a over the last 30 days.

Gran Tierra Energy is an independent energy company engaged in the acquisition, exploration, development, and production of oil and gas properties in Colombia. The company produces primarily light crude oil, supplemented with medium crude and natural gas. Production averaged 36,100 barrels of oil equivalent per day in 2018, and the company estimates that it holds approximately 142 million boe of proven and probable crude oil and natural gas reserves.. Gran Tierra Energy Inc. makes its home in Calgary, AB, and currently has CEO Gary S. Guidry at the helm.

Gran Tierra Energy Inc. ($GTE:CA) is one of the 200 Canadian small-cap stocks that make up the S&P500/TSX SmallCap Index, the widely recognized benchmark for gauging the performance of the Canadian small-cap market. Similar to the Russell 2000 in the United States, the index is market cap-weighted and consists only of smaller companies. To be a part of the index, a company must have a market capitalization between C$100 million and C$1.5 billion with an average share price of C$1 or more.