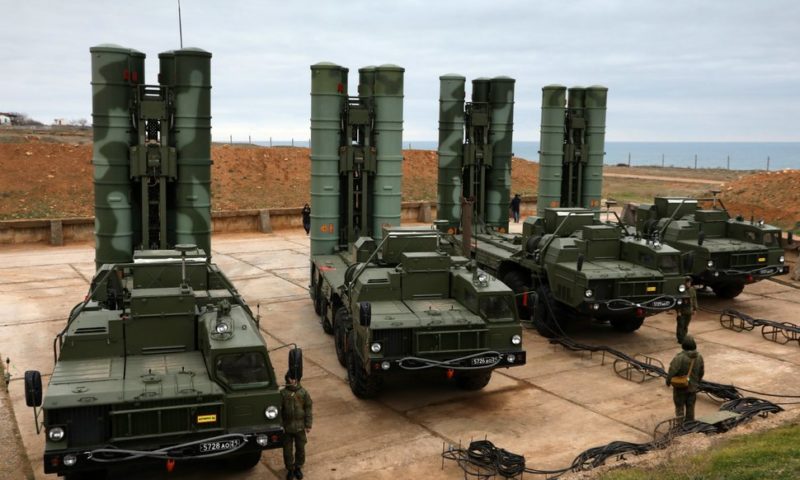 New confirmations of a deal with Russia to purchase missiles puts the NATO country on a collision course with its allies.

Turkey is barreling toward a confrontation with the U.S. following President Recep Tayyip Erdogan’s dismissals of new threats against his recent cooperation with Russia.

Erdogan confirmed in an interview this week that his country would begin receiving Russian-made S-400 air defense missile in July, adding a date to the prospective sale that has worried NATO allies in recent months. The missiles are not only incompatible with other weaponry the alliance uses, but also represent broader concerns that Turkey – the only predominantly Muslim country in NATO and a key partner in Syria and other regional conflicts – is solidifying its turn away from the military bloc in favor of a partnership with Moscow.

Erdogan added that Turkey may consider even investing in the more advanced Russian S-500 system.

“The S-400 is a done deal, there can be no turning back. We have reached an agreement with the Russians,” Erdogan told Turkey’s Kanal 24 television station earlier this week. “We will move toward a joint production. Perhaps after the S-400, we will go for the S-500.”

Army Gen. Curtis Scaparrotti, the senior U.S. general for operations in Europe and NATO’s top officer, warned in congressional testimony this week that Turkey’s pursuit of the S-400 deal would jeopardize American plans to sell to Ankara the new F-35 Joint Strike Fighter for both policy and security reasons.

“My best military advice would be that we don’t then follow through with the F-35, flying it or working with an ally that’s working with Russian systems,” Scaparrotti told the Senate Armed Services Committee in testimony on Tuesday. He hinted at concerns that Turkey’s using both the S-400s and the F-35 could provide Russia with valuable information on how to defeat the tech-heavy jet slated to become a signature fighter for NATO countries and their partners.

Erdogan’s comments follow reports that Turkey will begin new patrols in Syria with Russian forces. The move portends future conflict in a warzone that, following the defeat of the Islamic State group’s so-called caliphate, many experts fear will deteriorate into a battlefield among the many warring parties operating there that no longer have a common enemy in the extremist network.

Turkey has particular ambitions for its neighbor Syria and the Kurdish fighters the U.S. backed as a principal strategy in fighting the Islamic State group on the ground. Erdogan considers these forces inextricably linked with Kurdish terrorist groups operating domestically and in Syria, and the Turkish military has already begun targeting elements of these units to ensure they don’t maintain control along the Turkish border once the Islamic State group is defeated.

Trump has been largely silent on the issues affecting the Turkish-U.S. relationship. He has previously criticized Ankara for not doing more in the fight against the Islamic State group, and was particularly vocal about Turkey’s detention of an American pastor released last year. The president has made arms sales a signature element of his foreign policy with allied countries, such as Saudi Arabia.

American officials have been working feverishly behind the scenes to reduce tensions and maintain strong relations between Washington and Ankara. But skepticism in Turkey toward American partners continues to grow.

“‘How can Turkey trust this supplier, who is threatening not to deliver F-35s, and buy Patriots after canceling its purchase of the Russian S-400s?” wrote a columnist in Hurriyet Daily News, Turkey’s leading newspaper. “The answer is clear: Turkey cannot trust and depend on the U.S. under these circumstances.”